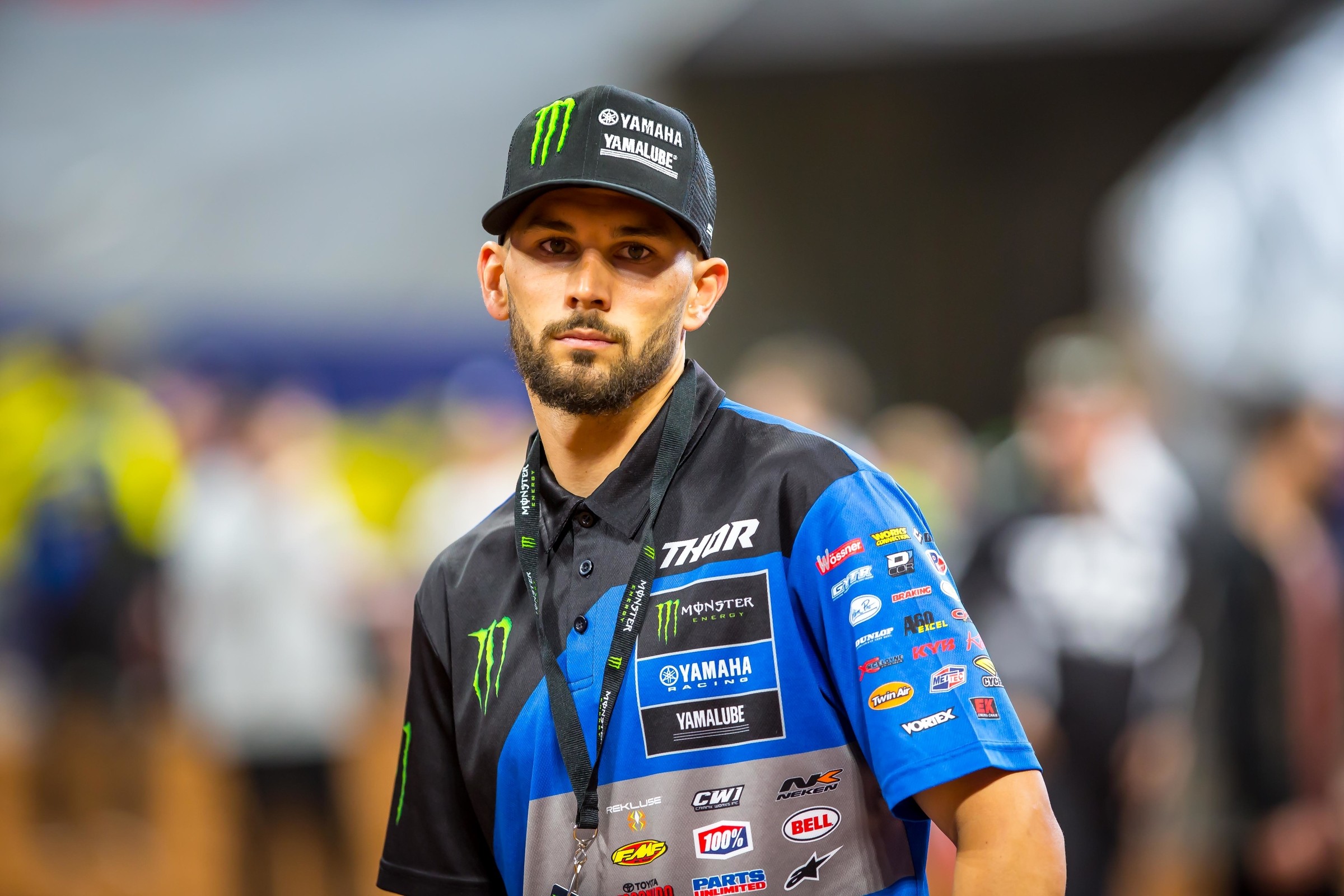 Colt Nichols placed third in the 2019 250SX West Supercross Series, and along the way, stood atop the podium for the first time at the prestigious Angel Stadium Supercross. But that was then and this is now. The native of Muskogee, Oklahoma rolled into the off-season in a full-on positive state of mind, but a midweek practice crash suffered at Pala Raceway in late October added up to a huge setback. Alas, the Monster Energy/Yamalube/Star Racing Yamaha challenger has been up on jacks and idle ever since.

“I was just practicing at Pala during the last week in October,” explained Nichols. “It was probably my last week of riding outdoors before we hopped on a supercross track to get ready for the 2020 season and it was just a little practice crash and it ended up getting me. I haven’t been on the bike at all.”

Determined to be a major player – and winner – in 2020, Nichols has been doing everything in his power to get ahead of it and back up to speed in time for the 250SX East Region opener at Tampa, Florida in mid-February. Today, we spoke with him.

Racer X: Colt, what’s happening, my friend?
Colt Nichols: Not a whole lot, man. I’m just leaving the gym. I went to the W gym today to see Dr. Nick and to get adjusted and to use the magnet machine on my foot a little bit. I’ve been trying to get that thing to heal up, so that’s kept me busy. I haven’t been too many places, really. I’m mainly just trying to mind my own business and to get my stuff handled that I need to get done.? I’m trying to get my shoulder to heal up and my foot as well. I’m pretty much just trying to get everything moving and trying to get some fitness back. Whenever I did my shoulder, I obviously couldn’t do anything for a few weeks. I had also broken my foot in three different places in the same crash. I couldn’t even cycle or really do anything while I was recovering from my shoulder. That was unfortunate for a little while when it comes to cardio and stuff. I was still able to do some things. I was actually even using one arm and one leg to ride this assault bicycle just to try to get some training in! Yeah, we’re trying to do everything we can to make sure as healthy as we can be when it comes time to go riding again.

I don’t mean it in a negative way, but when a rider at your level gets hurt, you have to feel like the world is going by you, huh?
Yeah, I mean of course. You want to be out there because you see everybody else progressing and getting better and you’re sitting on the couch. It’s just natural to feel that way. You obviously think that life is over and life sucks, but it’s all good, man. It’s part of the process. Everybody that has raced has to go through it. It’s just another little hurdle to jump over.

Seeing you can’t ride, have you been around the team and the bikes and just been keeping an eye on things?
I’ve kind of tried to stay away a little bit. I’m just kind of trying to work on myself and making sure that I can do everything that I can. My days are still extremely busy trying to go to this place for recovery or training. I’m just trying to do everything that I can and be as productive as I can to get back on the bike. We had our team photo shoot about a week ago and that was the first time that I got to be around some of the guys aside from seeing them in the gym and stuff. It was kind of the ultimate tease, but it was still really cool. Man. We’re all dirt bike heads when it comes down to it. We all really, really love it. It was cool to be at the track and be around the bikes and stuff. Of course it all made me miss it.

I’ll take a wild guess here and say that you’ll be racing the 250SX East Region come 2020.
Yeah, definitely the East Region. That’s kind of what we’re pushing for, to make the first round of the East Region, but it is still pretty early to tell yet with the injuries. We’re still pretty deep into the process right now with the shoulder to make sure it is all going as quick and as well as it can, but it’s the kind of injury you really can’t speed up to much, you know? But yeah, that’s the goal to get back at Tampa. You have to have a goal to start somewhere and that’s my goal: To make the first round of the East Region.

Taking a look back before the calendar rolls into the New Year, overall, how did you feel about your 2019 Monster Energy Supercross season? You won at Angel Stadium and climbed up on to the podium five additional times to place third on the season. Very solid.
Yeah, overall, I was pleased with it. I made a lot of strides in the right direction. I almost made it through the whole season healthy with the exception of the last couple outdoor races I missed. We definitely went in the right direction. We were going upwards and I got to win a race and be in the points lead. My starts were also improving a lot. A bunch of little things that I wanted to during the season we were able to check off the list and that’s always nice to be able to do that.

There have been quite a few rider and team changes made within the 250cc classification for 2020. With your position at Star Yamaha rock solid, the stability and familiarity with everything can be something of an advantage, eh?
Yeah, I mean this will be my fourth year with the Star Racing Yamaha team and obviously it’s worked out really well. Up to this point, I’ve had a lot of success there and I hope they enjoy having me as much as I’ve enjoyed being on the team. It’s been really good. Yeah, there was a lot of shakeup. A lot of guys switched around teams; some of the guys moved out of the class; there was a bunch of stuff happening, but I feel like we have a really, really strong team here. All of us won races last year. Three of us won supercross races and Justin Cooper won outdoor races. We’ve got a very strong team and we’re looking to do some damage this year, most definitely.

As far as the 250cc guys are concerned, who do you see being in the mix in 2020 supercross?
Honestly, I think the usual suspects will kind of rise to the top. Kind of the same a little bit of what we had last year. In the East, [Austin] Forkner was pretty dominant before he got hurt. Chase Sexton rode really good. Justin Cooper had some great races as well. On the West, there was myself and Dylan Ferrandis and Shane McElrath rode really well last year too. I think those are the guys that everyone is kind of going to be looking at coming into the season. There are a lot of guys who have moved around that who can really come in and shake some things up. It’ll make it interesting and it’s always fun at the start of a new season to see who is going to do what and who is going fast and all that kind of stuff. That always makes it fun. That’s why we all do it: To see who is the best and to see who comes out on top.

As you spoke about, you haven’t really been on the 2020 Yamaha YZ250F race bike yet. To that end, do you have any sort of idea or even vibe on how the new bike will be for you?
A little bit. When I was at the track the first time and I saw the guys riding a little bit, man, the bike looked incredible. They were able to work on a few things from 2019 into 2020 to try and improve a little bit of what we had going on and it looks awesome to me from the outside looking in. I’d love to say I have ridden the bike, but I haven’t. The team just keeps progressing and making everything better and better and better every year. I’m pretty excited to get back out there and see what we’ve got going.

Hey, how is your main man Justin Bogle been? Have you been talking with him?
Oh yeah. I’ve been talking with him quite a bit and he’s honestly doing really, really good. He’s had a solid off-season and he was able to kind of take care of some of the Epstein-Barr issues that he had going on. He’s had a solid year and solid off-season. He’s with the same team for 2020 and I think the Rocky Mountain team is a really good fit for him and it seems like they work really, really well together. I think Justin is going to surprise a lot of people this year in supercross. I’m looking forward to see what he can bring to the table in supercross. I think he’s going to do really well. I’m pumped for him.

What do you have going for Christmas?
I’m going back to Oklahoma. I’m supper-excited that I get to go back. Normally, I’m racing Anaheim I, so I can’t go back for anything. This year I’m going to back home for a few days and hang out with the family and relax a little bit. It is going to be awesome.

Before I let you go, I wanted to ask you what the long term plan is for one Colt Nichols. How you seeing the future?
I would love to get up in the 450 class within the next two years or so. That would be ideal for me. I would love to win a championship first in the 250 class in both supercross and outdoors. If I could get five solid years in the 450 class to prove to myself and everybody else that I can go win races at the highest level, that’s the ultimate goal and that’s really what I want to do. Obviously you have to make these steps first before you do that, but if I can make the proper steps, I really feel like I can do that and that’s what I want to do. I believe in my ability on a 450 and I feel like I can do really well in that class, but in due time, of course. Yeah, the ultimate goal for me is to retire a champion and go back to Oklahoma and enjoy time with my family and friends and all that fun stuff. I really appreciate everything I have and I want to go out and fight for everything that I want to get. I just want to keep going until the wheels fall off, pretty much. For now, this is life. This is what I want to do. I want to be the best at it.