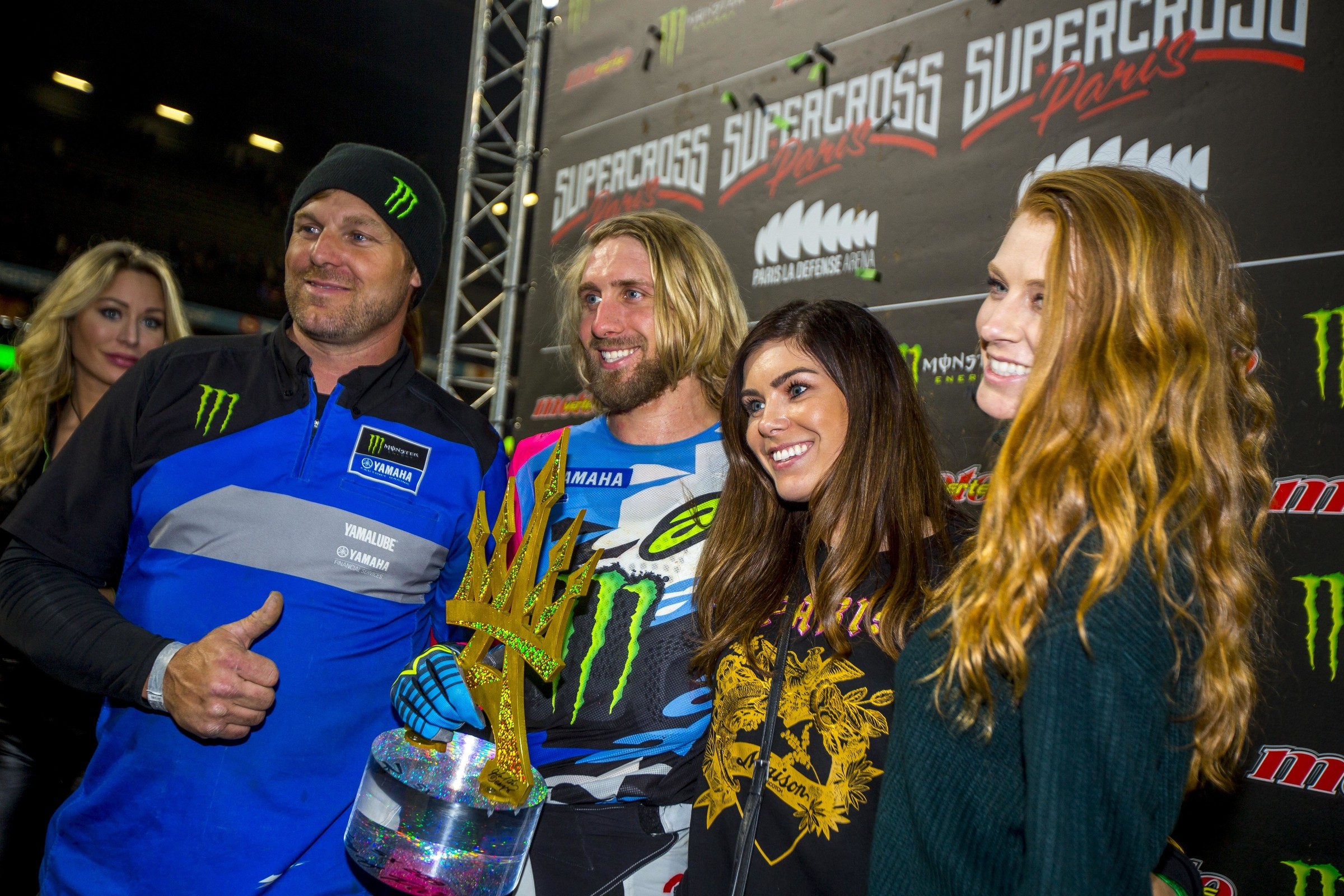 Last weekend’s Paris Supercross marked the 37th running of the most important and prestigious supercross race outside the U.S. The race started in Bercy Stadium on the outskirts of town in 1984, and since then there have been a total of 25 different riders to have claimed the King of Bercy crown as the weekend event’s overall winner. Of those 25 winners, nine have done it more than one time, and only two have done it more than twice. Here's a list of the multi-time King of Bercy winners.

David Bailey (1984, 1986): The first Paris SX took place in the then brand new Palais Omnisport in Bercy, a business district on the outskirts of Paris. Incredibly, the first race took place on March 14-15, which were the Wednesday and Thursday in between the Daytona and Talladega rounds of the 1984 AMA/Wrangler Supercross Championship. The riders left Daytona and flew straight to Paris, then straight back afterwards to race in Alabama—imagine that today! And just as they did for the rebirth of Team USA at the Motocross and Trophee des Nations, it was Roger De Coster and Team Honda who got behind this race, sending reigning AMA Supercross Champion David Bailey and current points leader Johnny O’Mara to compete. This time Yamaha joined them, sending along Ricky Johnson and Broc Glover. In Europe they were met by a bevy of Grand Prix stars: 500cc World Champion Hakan Carlqvist, 250cc World Champion Georges Jobe, soon-to-be 125cc World Champions Michele Rinaldi and Pekka Vehkonnen, Dutch title contender Kees Van der Ven—imagine that today!

O’Mara would win the opening night, with Bailey second. The next night Bailey would get the win and the King of Bercy crown as the overall winner, while O’Mara slipped back to third behind Johnson.

Bailey’s second King of Bercy crown in 1986, marking the last major win of his AMA Motorcycle Hall of Fame career.

Johnny O’Mara (1984, 1985): The second Paris SX actually ran in the same calendar year, as the promoters realized that the big draw for the event was the top U.S. riders, and they could not be assured that they would come again if it were in the middle of the AMA Supercross or Pro Motocross Championship. The second race took place in December ’84, and this time it was O’Mara, the newly-crowned AMA Supercross Champion, who got the overall win. One year later the O’Show would do it again, winning the third Paris SX and becoming it’s first two-time King of Bercy.

Ricky Johnson (1987, 1989): If there is any one rider who really epitomizes the razzle-dazzle of the Paris SX races, it’s RJ. Johnson was always up for playing a role in the elaborate opening ceremonies, and he also played up to the adoring crowd as the visiting American hero, putting on a show over the jumps and also riding as hard as if the races were at Anaheim. He would win the crown twice and remains a supercross icon in France.

Jean-Michel Bayle (1990, 1991): The Paris race made supercross a thing for aspiring young French racers, as the country embraced the American invention of indoor motocross unlike any other country around the world. The French media, including MotoVerte, also embraced the race and the sport, driving ticket sales and interest in supercross all year long. Everything combined together—the excitement of the event, the visiting Americans, the media coverage—certainly captured the interest of a young French rider named Jean-Michel Bayle. It inspired him to make it his goal to become the AMA Supercross Champion, as well as the King of Bercy. After first winning two FIM Motocross World Championships, he embarked on his conquest of America, as well as Bercy. JMB won Bercy first in 1990, then all three AMA titles (SX, 250 MX, 500 MX) in 1991. Then he returned to Bercy cap off that amazing season by winning the King of Bercy crown for a second time.

Jeremy McGrath (1993, 1995):Jeff Stanton and Damon Bradshaw notwithstanding, the next superstar of the Paris race was Jeremy McGrath. His meteoric rise to the top of the supercross world in 1993 was capped with his first King of Bercy crown. McGrath then won again in 1995, making him the fifth rider to win multiple King of Bercy crowns—all five of them on Hondas.

David Vuillemin (1999, 2000, 2001, 2003): The next French product to evolve was David Vuillemin, who as a kid rode a bus with his family and a bunch of supercross fans to see the SX in Bercy for the first time. Like Bayle, it inspired him to become a supercross champion. And while Le Cobra never quite won that elusive AMA Supercross title, he did become the all-time King of Bercy, winning the crown on four different occasions. Adding to his royal credentials were two Prince of Bercy crowns as the winner of the 125cc support class in 1996 and ’97. The Yamaha rider also ended the Honda stranglehold on multi-time winners of the French classic.

Andrew Short (2004, 2005): The Paris SX changed often over the years, as the promoters found the price of getting top U.S. riders as well as top French heroes out of their budget. There was also the influence of Ricky Carmichael, who only raced Bercy once in 1999. He made a strategic move to skip international off-season paydays in order to focus on AMA titles, so not having the reigning AMA Supercross Champion (in five different years) lessened the prestige of the event. It also opened the door to aspiring young riders like Andrew Short to emerge of the global stage with winning appearances in Bercy. Shorty won two straight years, both on a Honda.

Marvin Musquin (2016, 2017): Yet another one of those young French prospects who was highly influenced by the race in Bercy was Marvin Musquin. Like Bayle and Vuillemin, he grew up wanting to race supercross in America, and also become a King of Bercy. The Red Bull KTM rider won the Paris SX twice, and he’s been a title contender here in the states for many years.

Justin Barcia (2010, 2013, 2019): Finally, this year’s King of Bercy winner, and the rider with the most time in between Bercy crowns, Monster Energy Yamaha Factory Racing’s Justin Barcia. With his win in last weekend’s 37th running of the Paris SX, he became only the second rider ever to win more than two overalls at the Paris SX. He’s now the only rider in the event’s history to have won King of Bercy on different brands of motorcycle, as his first two came on Hondas and this most recent one on Yamaha.