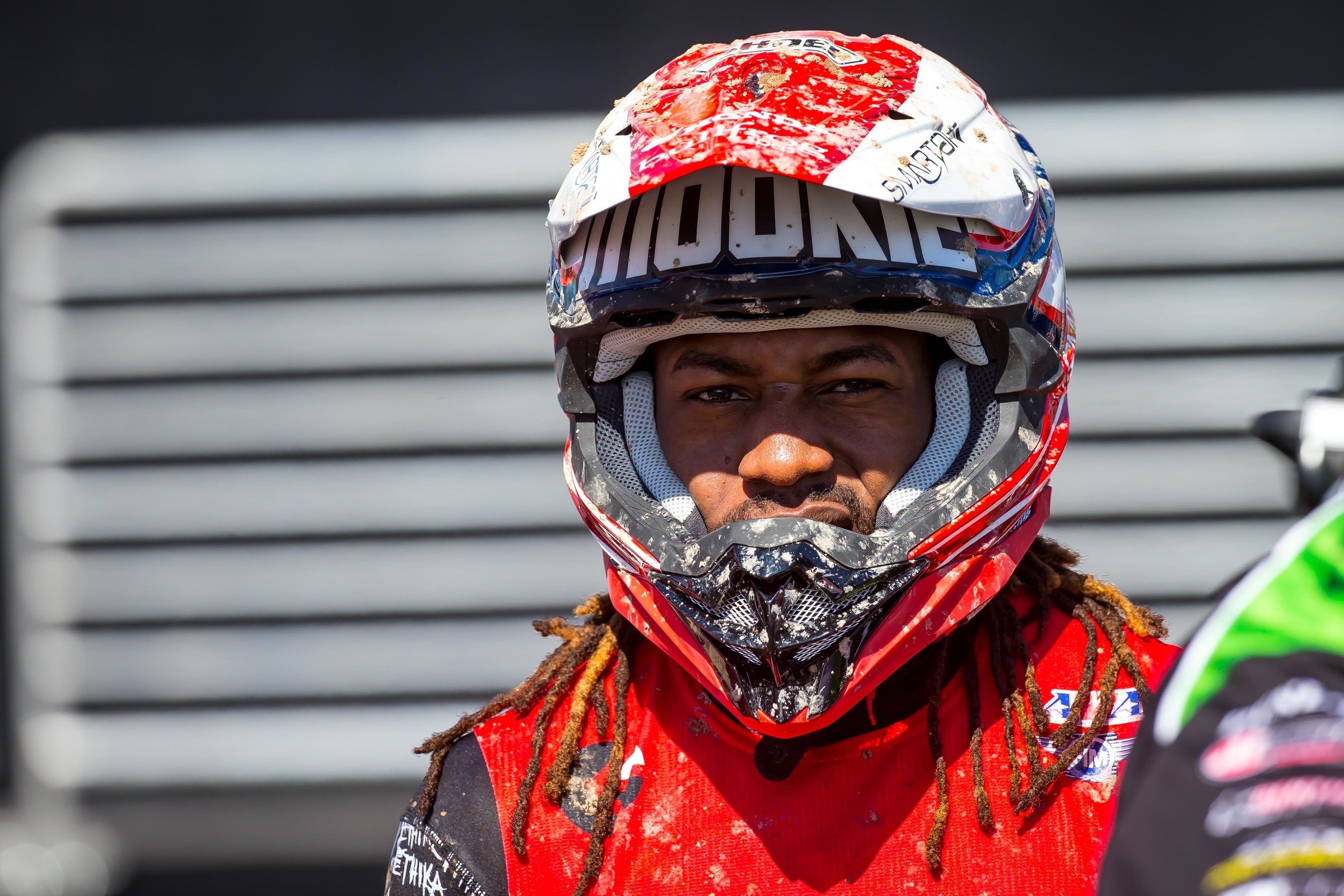 Malcolm Stewart was said to be flying at the test track last year, and he backed that up by battling for the win at Anaheim 1. Then he got hurt while in the fight at round two, leaving him out of action for the rest of the season. Mookie has been back on the bike for awhile and is once again said to be flying at the test track, and again he’s backed that up with a great ride at Monster Energy Cup. Mookie won the second of three main events and stood in a three-way tie for the overall Cup win heading into final race of the night. He took third in that race for third overall, but for the SmarTop/Bullfrog Spas/MotoConcepts Honda rider to be in the mix against factory Monster Energy Kawasaki superstars Eli Tomac and Adam Cianciarulo says a lot.

He said more to our Mitch Kendra after the race.

Racer X: Congrats on a great night. Like you said, you’re just excited to be back. What was running through your head going out there and battling with everybody and stuff?
Malcolm Stewart: Yeah, battling with those guys was awesome to me. As long as it felt, like nine months [since his injury at the Glendale Supercross], it felt like so long to me. Just being back out there, and racing with the guys is just that feeling. I can’t explain it. I was more pumped about at least I got a moto win. I got some clean air. It felt so good to get some fresh air. My SmartTop Honda got me off the gate for that one. I just worked my way through it. I kind of blew it in the last one a little bit. I was kind of bummed out those guys got clean air. Adam and [Eli] were pushing it. That’s what racing’s all about. Like I said earlier, this is probably the craziest Monster Cup I’ve ever raced, and I’ve been racing since 2013. Going backwards on the track, that was a mind spin right there. I can say this though—if you really sit back and think about it, you got three riders going into the final round all tied up. I’ve never seen that at any of them before this. So the fact that that happened is pretty cool. I know it kept the fans on their feet.

Talking about tied up, you and your teammate Vince [Friese] were kind of battling back and forth throughout. He was obviously out with injury last year as well, so what’s it like for you to have such a great night and for him to have such a great night as well?
I think Vince ended up fourth so for him that’s awesome. We’ve been pushing each other on and off the track, at the practice track and stuff. So shout out to him. It was cool. It was really cool. I know a few riders got hurt [today], so I just want to say shout out to my buddy Dean Wilson. I hope he’s okay. I heard Jordi Tixier got hurt and a couple other riders maybe got hurt. It sucks. It’s part of racing. We need guys like Dean and all those riders. We need everybody to be healthy going into A1, but that’s the risk that you take. Obviously for me, the same thing happened [last year]. Just one of those things. You just hope they come back stronger than ever.

In the press conference, you talked about the team right now being a winning team. Justin Brayton is going to Honda HRC for next year, Justin Hill just was announced as your teammate for next year. So having you coming in strong again, Vince having a good night here and coming in strong next year, Justin Hill coming in, what are your thoughts on the team looking into next year?
I’m sure the team’s pumped right now. Just for those guys to go three and four, just top five in general, that’s a big night for all of us as a team. We were a team that was kind of under the radar and Justin Brayton set that bar for us that it’s a winning team. For me to come out here and get a podium, it just goes to show you, don’t let the little team fool you. This team has got some heart in it. I think that’s what makes this team so cool is everybody is chill. We all want to do good. We all want to win and want to be recognized.