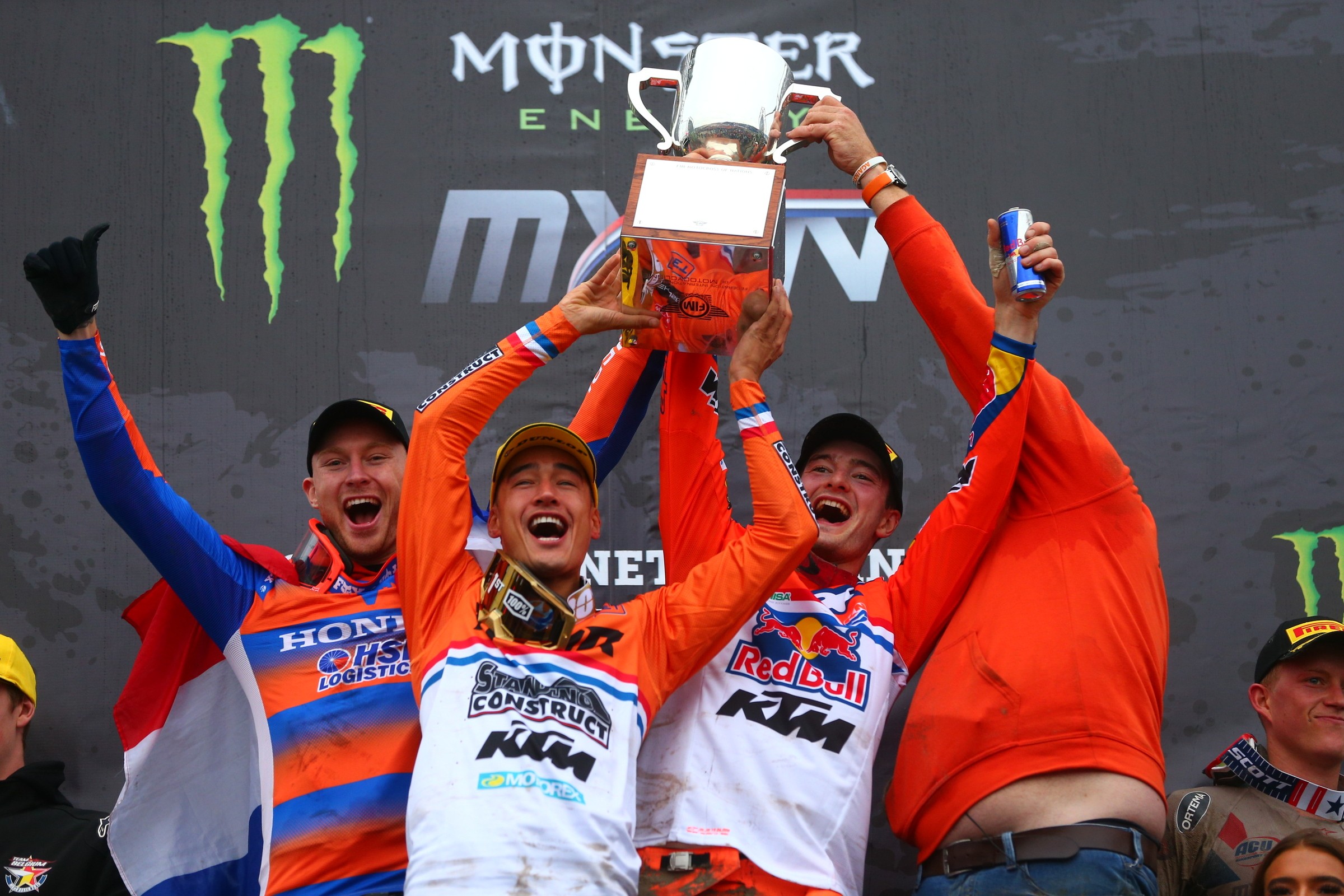 Well, it’s all over but the crying. The Chamberlain Trophy, which is awarded to the best country at the Motocross of Nations is, for the first time ever, going to reside in the Netherlands. Heavily favored coming into the weekend here at their home track of Assen, the team did what they had to do in horrible conditions and brought the win home rather easily at that.

Jeffrey Herlings, Glenn Coldenhoff, and Calvin Vlaanderen had the race basically clinched after the first two motos with Coldenhoff going 1-1 in his two motos for the overall win in Open. This marks four straight motos that The Hoff has won at this most prestigious event. Herlings suffered from poor starts all day long and crashed at least three times in his second moto but went 2-4 for second overall in his class. Vlaanderen fought the good fight through some crashes and went 10-10 in his two motos for second overall in MX2.

Add it all up, drop each teams worst score and it was Netherlands scoring 18 points with Belgium having a whopping 47 and getting second. The home crowd, with the King of Netherlands here, the real one, not Jeremy McGrath, watching it was a great day to be Dutch.

As far as the American team it was tough sledding all day with these conditions. Justin Cooper gated well in the first moto (he had inside gate) and was running tenth or so when he got sideways in the slop and went down. Unfortunately, it was his teammate Jason Anderson that he took down as well and it was an ominous start for USA. Never really feeling at home, Cooper and Anderson got up and charged hard (Cooper had no clutch) but Justin’s 25th wasn’t ideal. Anderson showed a lot of heart and worked up to 17th (he was actually 13th before a last lap crash dropped him four spots).

This is what happened to Jason Anderson and Justin Cooper on lap one of that MXoN moto. It could have been so much worse... pic.twitter.com/0qad4tVRYu

The second race saw Zach Osborne get the inside gate but he couldn’t get the start he needed and came around in 13th. He rode up into fifth which was a good showing but on this track, with these conditions, a better start was essential. Cooper seemed off the entire moto and could only muster a 29th which was the score USA would drop on the day.

The third moto, with Osborne and Anderson, saw Osborne again get the inside gate but again he couldn’t make it work. Anderson did make some magic happen with the outside gate and was in front of Zach after lap one. Eventually he charged up to eighth while Osborne, who had to stop for some goggles at some point, finished 13th. It was the best combined moto of the day for USA and allowed them to get sixth overall which, being honest, seemed a tough ask after moto one.

The overall MXGP winner on the day was Slovenia’s Tim Gajser who held off a brilliant charge by Herlings in moto one and then took his Honda to a second in moto three. The winner of the MX2 class was Denmark’s Thomas Kjer Olsen who worked his way up hella good in moto two on his Husqvarna. Both races the Danish rider was impressive. Slovenia (Gajser) and Denmark (Olsen) weren’t factors in the overall countries standings but both guys were great.

Second overall was Belgium who had consistent steady riders by Jeremy Van Horebeek, tough gritty rides from Kevin Strijbos, who crashed both motos, and they even survived a DNF from their MX2 rider Jago Geerts.

Third overall was Great Britain who needed a last lap motor failure from France’s Gauthier Paulin to move into third overall. Shaun Simpson, a former winner at this track, had a great first moto and they also survived a bike issue as Nathan Watson’s KTM had issues.

So that’s it from the press room here in Assen, the hometown heroes win their first ever MXoN and what a ride it was. By far the best riders on the day, they finally broke their streak of runner-up rides to stand on top. As far as Team USA, bad luck, bad weather, some bad riding, however you want to say it, it was another weekend where they failed to get on the podium and the all-time winless streak continues for another year.