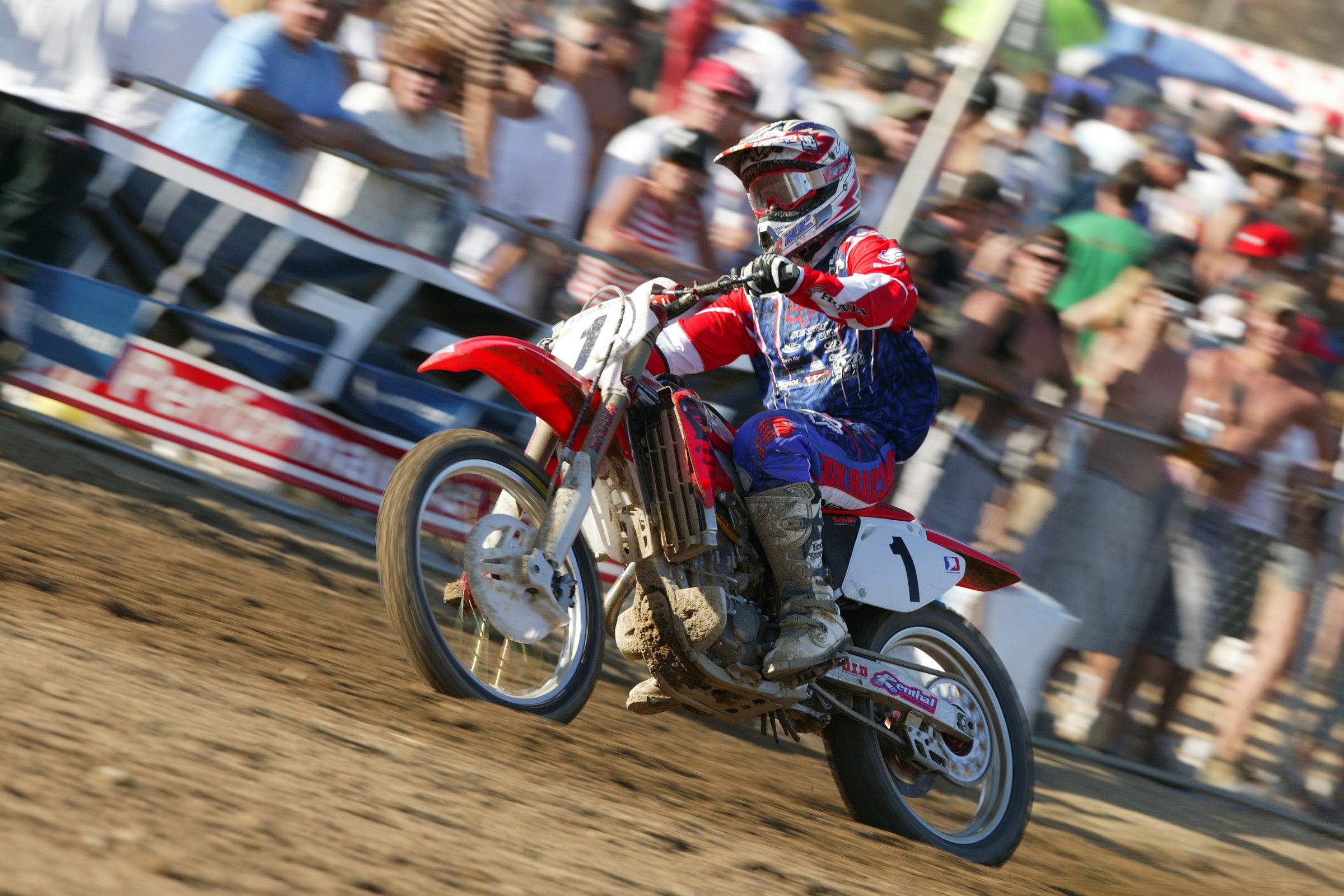 With Eli Tomac holding a 50-point lead, it's all over in the 450 Class before the series finale of the Lucas Oil AMA Pro Motocross Championship.

What's a champion to do with the free time? Here are a few I can think of...

2004: After clinching the title at Steel City, James Stewart parks his two-stroke KX125 and lines up at Glen Helen aboard a KX250F for the first time and dominates even more than usual. The Kawasaki KX125 he left behind immediately became the last 125cc motorcycle to ever win an AMA Pro National or AMA Supercross.

2004: That same day, in his last ride for Team Honda, Ricky Carmichael drops his trademark #4 from his front number plate and wears #1 as a salute to his soon-to-be-former team at Honda, where he won a total of five AMA Pro Motocross and AMA Supercross titles, all while wearing #4.

2001: Since he already owns the 250 Pro Motocross title, Carmichael gets on a Kawasaki KX125 at Steel City and breaks the tie he has with Mark Barnett for all-time 125 wins with 25 (with a little help from Mike Brown). That record would stand until the aforementioned '04 Steel City 125 National, when Stewart wins his 27th.

1978: Bob Hannah is the runaway champion in the 250 Class, but he injures his wrist with two rounds to go and decides to sit those rounds out. Suzuki's Kent Howerton wins RedBud and then Honda's Jimmy Ellis wins High Point.

2012: Similar story here as Ryan Villopoto wraps the Monster Energy AMA Supercross Championship up early, but then crashes and tears his ACL at his home event in Seattle. That leaves the Seattle main event up for grabs, and Ken Roczen (on a KTM 350SX-F) and Andrew Short duke it out for the win. Shorty takes it, his lone triumph in AMA Supercross.

2003: After clinching the MX1 World Championship, Stefan Everts goes to the last round in France and, since the series runs a one-moto format in '03, decides to race all three classes: MX1 (450), MX2 (250), and Open. He wins all three races in a never-to-be-repeated performance.

1995: After clinching the title long ago, Jeremy McGrath goes to the AMA Supercross finale with nothing to lose (or gain, really). When the lights go out in the stadium, forcing the promoters to delay the race and then run it with auxiliary lighting, he has the luxury of just passing on the race all together. In part it's a protest of the way things had been going in SX, and his move (along with a few other riders who pass on the race) is the catalyst for positive change between the riders and promoters.

1991: McGrath had not quite clinched the 125SX West Region yet, but he only needed a ninth-place finish in one of the last two rounds to win the 1991 title on the Peak/Pro Circuit Honda CR125. Unfortunately, this was back when SX and MX overlapped, and Jeremy broke his lower leg at the High Point 125 National, putting his SX title in jeopardy.

"We knew I needed a ninth, so we taped the leg up for the next to last round, which was San Jose," recalls McGrath. "My lower leg was so swollen I had to wear my normal Size 9 boot on one leg and a Size 11 on the other leg!" Somehow, the future “King of Supercross” soldiered on, got the ninth-place he needed to clinch the title, and then had the luxury of just sitting out the last round at the last race at the LA Coliseum. McGrath’s constant rival Jeff Emig finished three points down to McGrath in the final standings.

1985: After easily clinching the 125cc title, Team Honda asks Ron Lechien to move up to the 250 Class for the final round at Washougal in the hopes he can help teammate Johnny O'Mara in his title battle with Kawasaki's Jeff Ward. (David Bailey, who lost the 500 title to Broc Glover, was also dispatched to the 250 Class). No matter, Wardy was able to add the 250 Class title to the '85 AMA Supercross crown he had already won.

1985: That same day at Washougal, 500cc National Champion Broc Glover decided not to race at all, as he had been banged up at the end of AMA Supercross. With Bailey dispatched to the 250s, it opened the door for Washington's own Eric Eaton, a Yamaha support rider, to win the 500 National overall, the one and only win of his professional career.

2005: With Carmichael having already clinched the title, the MXoN Team USA riders decides to run the last round at Glen Helen with their Team USA livery and numbers, which are super high because Team USA sat out the '04 MXoN. As a result, Carmichael is #101 in what's still called the 250 Class, Ivan Tedesco wears #102 in the 125 Class, and Kevin Windham is #103, also in the 250 Class. Carmichael wins his race to claim his third undefeated Pro Motocross season in four years while Tedesco clinches the 125 title, despite that bizarre crash with Mike Alessi.

The incident occurs around the 3:35 mark.

2016: Ken Roczen had already wrapped up the 2016 Lucas Oil Pro Motocross Championship in the 450 Class, and wanted to race a two-stroke RM250 at the final round. But the old bike, no longer in production, was not allowed under AMA homologation rules. So Ken lined up one last time for the RCH Racing Suzuki team and went 1-1 on a Suzuki RM-Z450. The next time we saw Roczen race would be the Monster Energy Cup several months later, and he would be aboard a Honda CRF450R.

2011: Roczen got to do his two-stroke race here, as he had wrapped the 2011 MX2 World Championship in MXGP and raced a KTM 125SX at the final round in Italy. He finished fifth in the first moto but crashed out of moto two.

As for Eli Tomac, we expect him to show up and race his regular Monster Energy Kawasaki KX450 this weekend. But a fan can dream, right?