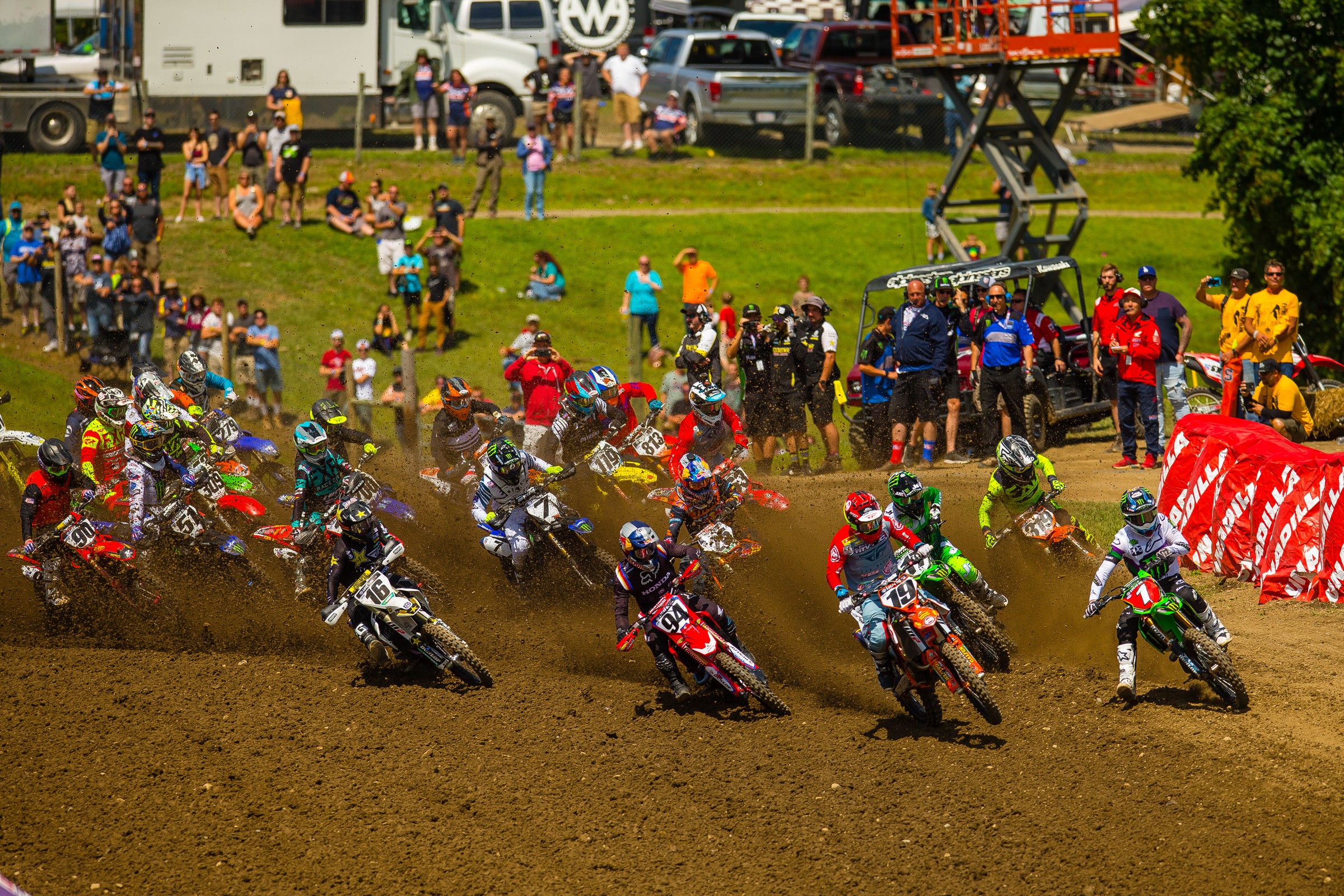 We’re once again firing off questions at long-time pro Jason Thomas for some opinions on the tenth round of the Lucas Oil AMA Pro Motocross Championship.

Saturday was clearly Ken Roczen's day. What stood out to you that made him so successful?

Kenny’s results have been incredibly hard to predict. The only parallel I can half-heartedly draw is the weather. It was cool on Saturday with a high of 69 degrees. That has seemed to help lower the taxation on Kenny’s body and whatever ailment he has been suffering from. Further, the track was incredibly technical with deep ruts covering nearly every inch of it. Kenny’s technique is the best I have seen since Stefan Everts and on a track that requires perfection, it shouldn’t come as a shock that he was on form. His three-second gap in timed qualifying was a perfect example of how Kenny’s standing-through-corners technique can decimate a field. He doesn’t slow down mid-corner and on a rutty track where mistakes are more the norm than the exception, he is simply next level. He uses a low RPM approach, carries momentum, and allows the bike to flow freely. On a smooth track with lots of traction, his technique is not a big advantage. On a track like Unadilla on Saturday, it’s everything.

The track was incredibly tough. The riders that are prominently displayed on live television can ride at an extraordinarily high level. Watching them flounder around making mistake after mistake was all I needed as far as determining the track condition. Ruts in corners are difficult enough. Add in six or eight ruts down each straight away and you have yourself a serious problem.

If I had to guess, I would bet Tomac’s arms pumped up and he couldn’t find any rhythm at all. Riding a track like Unadilla with arm pump is basically an exercise in futility. He was in survival mode from what I could ascertain.

Justin Barcia was looking great early on in both motos. He earned his best moto finish of the year in the first moto and put himself in a good position early in the second moto until he went down in a turn. Is there more of this to come?

He was definitely riding better than he has for most of the season. I attribute a majority of the day’s success to it being Unadilla. Justin grew up riding tracks with this similar soil composition. It’s a very difficult track to feel comfortable on for most but he has always ridden it well. If he has that same performance at Budds, I will circle back and maybe we are onto something.

Dylan Ferrandis and Adam Cianciarulo battled all day. How good was the action between these two?

For several weekends now, they have been almost inseparable. Their pace is almost identical. Adam was much more prepared for the beginning of the season where Dylan blamed a supercross hangover. That could be the difference when all is said and done, because Ferrandis is still facing a points gap and time is running out. With four motos left, anything can happen, but Adam took a huge step towards a title with his even-points day at Unadilla.

Ferrandis tried to double the roller at the bottom section of "The Elevator" and he came up a little short on the forgiving landing. We saw some guys doing this cleanly in press day but really didn't see anyone taking that approach in the motos. If landed cleanly, would this be faster or slower than simply rolling and taking off upon landing?

This line has always been possible but it depends on how the jump is built and how the corner forms. Some years, it’s very easy. This year, the corner was tough to execute cleanly and the landing was very soft. I have seen many riders case this jump and immediately flip over the bars (Michael Byrne comes to mind), so usually riders won’t attempt it unless they know they have it. Ferrandis was making a big push to pressure AC and wanted to pull out every trick in the arsenal. He didn’t get the best drive out of the corner and as he left the face of the jump, you could hear his bike lugging low in the RPM range. It was a bad idea from the get go but I understand his methodology. He had to try everything to get AC and gain more points! The heavy rains earlier in the week really made the jump a non-factor for 2019 but I give him credit for trying.

While Chase Sexton wasn't able to make a pass on Ferrandis or Cianciarulo, he did look the best we've seen him look since the first moto at the Florida National. Do you think Sexton will get into the mix with Ferrandis and AC or even contend for wins and impact the championship, although he's already out of the hunt?

He will certainly try to! I don’t think he quite has the pace to beat either of them just yet but he was his best since the Florida National at WW Ranch Motocross Park. His starts have been his biggest weakness but he found a way to fix that last Saturday. His home race is the last round of the series and I fully expect Cianciarulo to be thinking championship, so maybe that’s an opportunity brewing. In any case, it was great to see Sexton back to full strength. He had me shaking my head for several weeks this summer but that looks to be history now.

Coming into the championship we thought Justin Cooper might be the man on top come August 24. He's now 59 points behind Cianciarulo and 31 points behind Ferrandis. He hasn't been bad but he seems to be lacking something he started the season with. What has happened to Cooper's championship hopes?

I think he is suffering from his first full season (and not even a full 17 round SX season at that). Last year, he hurt himself at Houston and we didn’t see him again until Hangtown. That meant a fresh, energetic approach where everyone else was recovering from the supercross marathon. Preparing the whole off-season, racing supercross during the spring and firing directly into a 12-round outdoor season is a learned skill. The human body adapts quickly but he is going through this experience for the first time. It’s incredibly hard to stay sharp and keep that intensity month after month. Many laugh when I talk about peaking at the right time (Matthes), but to be at your best for such a long span, there has to be a thoughtful approach. Knowing when to train and when to rest can’t be overvalued. This point of the season is almost impossible to really improve. Being your most rested, strongest self on Saturday is really the only emphasis. If that isn’t happening, something is wrong in the plan. What could be more important than that?

I can’t do anything right when it comes to fantasy. It’s been a very emotional, difficult time in my life. Kidding aside, I have had a rough go lately. I seem to pick the only guys who can’t finish motos. Case in point, Jo Shimoda went DNF-DNF on Saturday. Yes, he was on my team. Another hero of my team was Aaron Plessinger. He had a bike problem in the first moto while running well inside the top ten and then was simply unable to climb higher than 18th in the second moto. If you are looking to have a horrible race day, find your way onto my team.

The other side of the coin were those who scored huge points and avoided my final list of chosen riders. Carson Mumford, even though he only did one 30-minute moto before his debut, somehow came through. Chase Sexton rode well and was a double points hero. Kyle Cunningham killed it after several weeks of bike issues (why I avoided him). There were several more riders who did well but to be honest, I was so pissed off, I quit paying attention.

Thoughts on the MXON team?

I am good with it, although I think we are facing a monumental task. I would have preferred the rumored team of Zach Osborne (250), Cooper Webb, and Jason Anderson but I am happy we have riders who will put effort into it. Anderson was lights out good at Maggiora a few years ago and will want to finish the job. Osborne has ridden this Dutch sand before and loves this race. He was the obvious choice for months and we are lucky to have him representing America. The only real question mark will be Justin Cooper. It’s his first foray into European racing and also this type of sand. I will be curious to see how he adapts and handles the pressure. The one upside I will mention is that he is the best starter in the 250 Class stateside. That goes a long way in this event. If your MX2 rider can start up front, he makes life much easier for himself. Passing similarly talented 450 riders in the sand is almost impossible, giving up so much torque on the exit of each corner. If Cooper can execute great starts, he might be the best 250 choice simply because of that reason alone.

I have been to all of these losses in a row. It’s painful for me to experience every single time, but I also respect the guys that make the effort to do it. There’s no money to go win. It’s all pride. With Kawasaki’s decision to avoid this year’s event, wouldn’t it be awesome for Team USA to surprise? We have always been at our best with an underdog  team. The French and the Dutch are going to be tough to deal with, especially the Dutch in my opinion. We have a puncher’s chance, though, and that’s all you can really ask for at this event. Crazy things happen at the MXoN, always have and always will. Will things get crazy enough for Team USA to find their form again? Time will tell.