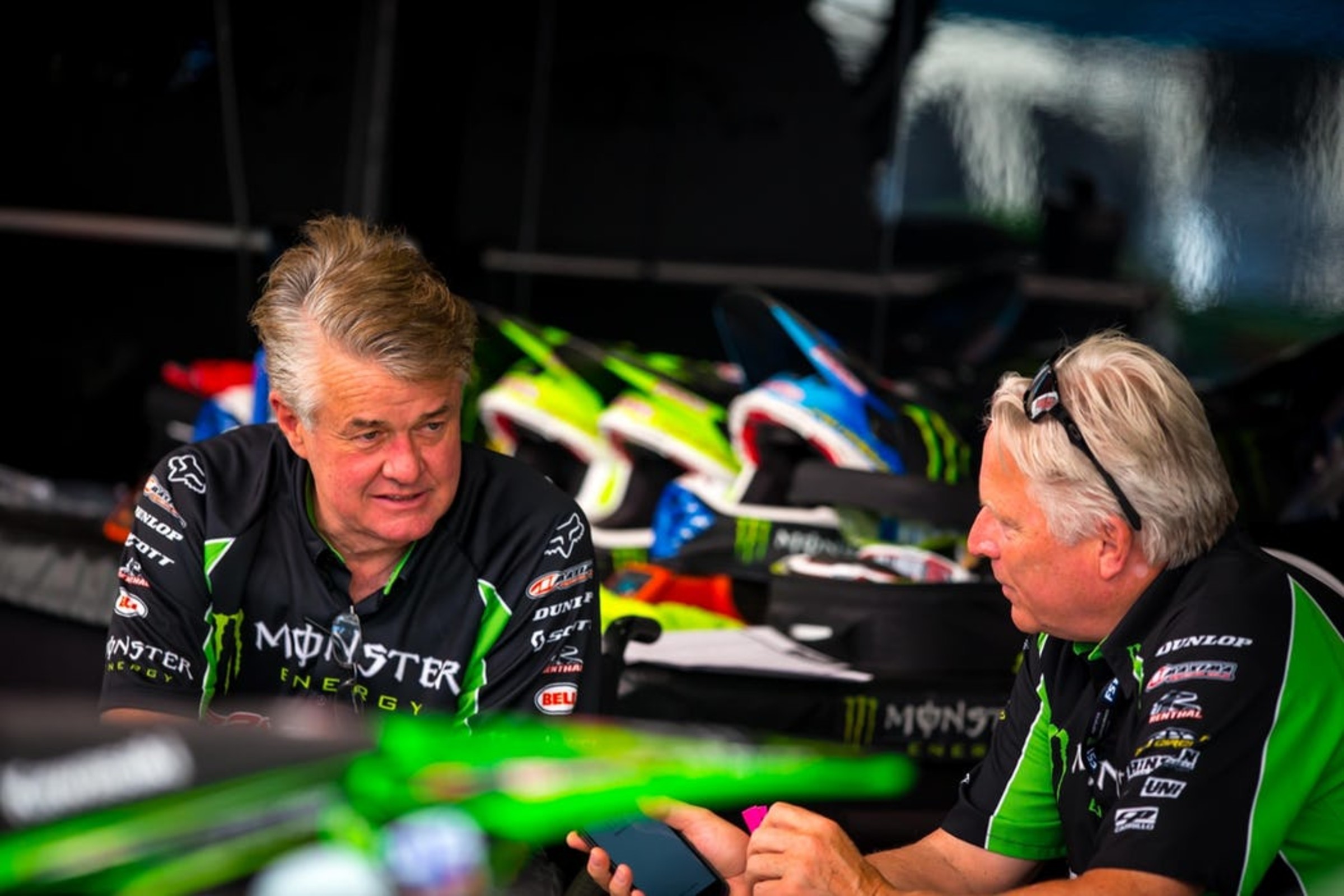 A mechanic walked out of the Monster Energy/Pro Circuit Kawasaki race shop and headed into Mitch Payton’s clean, well-lit office. The two spoke quietly for a beat or two and then Payton went quiet before saying, “So he has a cold and still wants to ride an hour tomorrow out at Glen Helen?” The mechanic nodded. “No, let’s hold off. I want him ready and at full strength for Saturday night.”

And so how it always works inside of the big bright white building off the side of the 91 in cosmopolitan Corona, California, everyone took possession of their marching orders and set out for either an NFL Football stadium or a race track somewhere out there in moto America. Owner and operator of the storied Pro Circuit hop-up enterprise as well as the astonishingly successful Monster Energy/Pro Circuit Kawasaki race outfit, Payton has built a dynasty and one that is poised to win one, if not two, 250SX titles come May over in the big neon glitter of Las Vegas.

When Mitch Payton talks, people listen, just like this writer did when he swung by to see Mitch on the Thursday before he bolted for the Lone Star State. With races getting harder and harder to win these days, Mitch had a lot say and a lot to weigh-in on. Check it out.

Racer X: Mitch thanks for taking the time to knock this out. Up to the running of 2019 Monster Energy Supercross Championship season, the championships and wins were a bit slow in coming for the Monster Energy/Pro Circuit Kawasaki race effort. As we motor towards the two-thirds mark of the stadium tour—and with your two guys leading both the West and the East Region title chases—what does one Mitch Payton think right now?
Mitch Payton: I don’t think any different than I have thought the past three or four years and everybody talks crap on us. I think our guys were always good and I think we had some little injuries that made some of our guys start various race series earlier than we wanted to because we didn’t have a choice and they had to try and get healthy and ride into these different series. Before this season, you know Adam [Cianciarulo] got his ACL done and he had plenty of time to rehab that and that’s been really good for 2019. He’s been a lot stronger and better. Adam has been fine. It’s just using his head. He wants to go so fast. This year we said to him, “Don’t go any faster than you have to go. Don’t try and check out and try and get 10 seconds on everyone. Get in the lead, try to mark guys and try to be a little smarter.” And he’s also more mature now. Adam has been working with Nicky Wey and Nick is pretty calm with what he’s doing and I think that’s been a big plus. Adam has just been doing his and that’s been really good for us.

There are so many variables involved in being a professional, championship-contending racer in both supercross and motocross. Bikes and budgets and technology and then there is the rider himself. The sport is also so athletic and dangerous, that the rider always needs to be at 10/10s. Thoughts?
It is. And it changes every year. Our guys are always trying to be a little more patient and smarter; same thing even in qualifying as you don’t have to be the fastest guy. It’s just, like, get everything done, make sure you’re solid and I’m happy with all of them.

Austin Forkner certainly seemed to be prepared and confident coming into this year and that’s certainly been reflected in optimized results.
Well, and I think the same thing. Last year Austin had an injury coming in and he did the best he could to start the series. During supercross he had another nagging little injury and that wasn’t perfect timing. For this year, he’s got Robbie Reynard working with him and he’s got this guy Angus back there who has been working with him on the strength thing. Together they’ve made a plan. Robbie has talked to me about it. They are confident that they have a really good plan. I can see it this year. Austin looks stronger, he looks better, he looks more solid, and he looks more mature. And he is more mature. I think Austin has done a fantastic job. He’s dealt with pressure, he’s had to deal with a few things and he’s doing everything that he needs to do.

What’s your take on Garrett Marchbanks’ season thus far? His runner-up showing at San Diego was impressive.
Garrett, first full year in supercross, at San Diego in the mud, he loved that. I didn’t realize he liked mud so much and he was excited about it. He pulled his goggles off in the second turn and then rode the whole moto without goggles and never had a problem and just kept going, going, and going. He rode a fantastic race and that was really cool and inspiring and confidence-building for him. We have him working with Ivan Tedesco and Ivan tests for us. Ivan is almost like part of our family and it’s great because we trust him and we believe that he knows what it takes to succeed. Unfortunately, I have a business and a team and you’ve got to spend time with everything. I trust Ivan wholeheartedly to accomplish what we need. Ivan is also still a good enough rider to where if he goes to the track to ride and if you’re not as fast as Ivan, you better pick it up.

It definitely seems like everyone involved with the bigger race teams has got their program and secrets and shadowy men from a shadowy planet trying to figure out a way to make lightning strike, huh?
Yeah, everybody has got their program. KTM and Husqvarna have got their theory that Aldon [Baker] is the guy. Tyla [Rattray] helps Troy Lee Designs and the Husqvarna guys. They’re all obviously successful and smart at training. Tyla is a fantastic rider and he can help those guys. However, having said all this, I don’t think its cookie-cutter; like, I don’t think everybody is the same. It’s a good base. The proof is that Aldon is successful, but he also has always had successful guys. When you take a young kid and you dump him in there, I don’t really know if they can gain everything out of doing that program. We tried that with Adam and I don’t know if it necessarily worked. I believe trying to find the right balance between everything—I don’t know if what we do is perfect or what they do is perfect. Everybody should just do their own thing.

Martin Davalos is fifth in 250SX East Region points, yet he hasn’t hit the podium. How do you feel about his run thus far?
Martin was really fantastic last year. He got hurt at the first race this year. He rode a couple of races and thought he was fine and then he got an X-ray and we found out he had a fracture his neck. We got all that handled, but at the moment we’re kind of surprised that we aren’t the same Martin yet as we were. For five years, Martin has been one of the fastest guys at every single race. That’s the guy we expect and the guy that everyone is looking for and we’re a little off from that and it’s a disappointment for Martin, for sure. I know he’s disappointed and we’re disappointed, but I want to support him 100 percent and we’re trying to work through things we’re finding and we want to see what we can do to make it better.

It seems like the sport is getting more complex as well as it is more competitive.
It is and it’s harder and to stay on top takes more. If you don’t care, it’s easy. Yeah, we got a team; yeah, we’re racing; yeah, we’re doing that. We kind of have a legacy here and we kind of want to do that. I mean we won and won and won and then it was like, “Wow, Pro Circuit didn’t win! What are they doing?” Then you go on Vital and people are saying, “Oh, the wheels fell off.”  We always ask our guys to win so you have to try and win. We’re here to win and always will be.