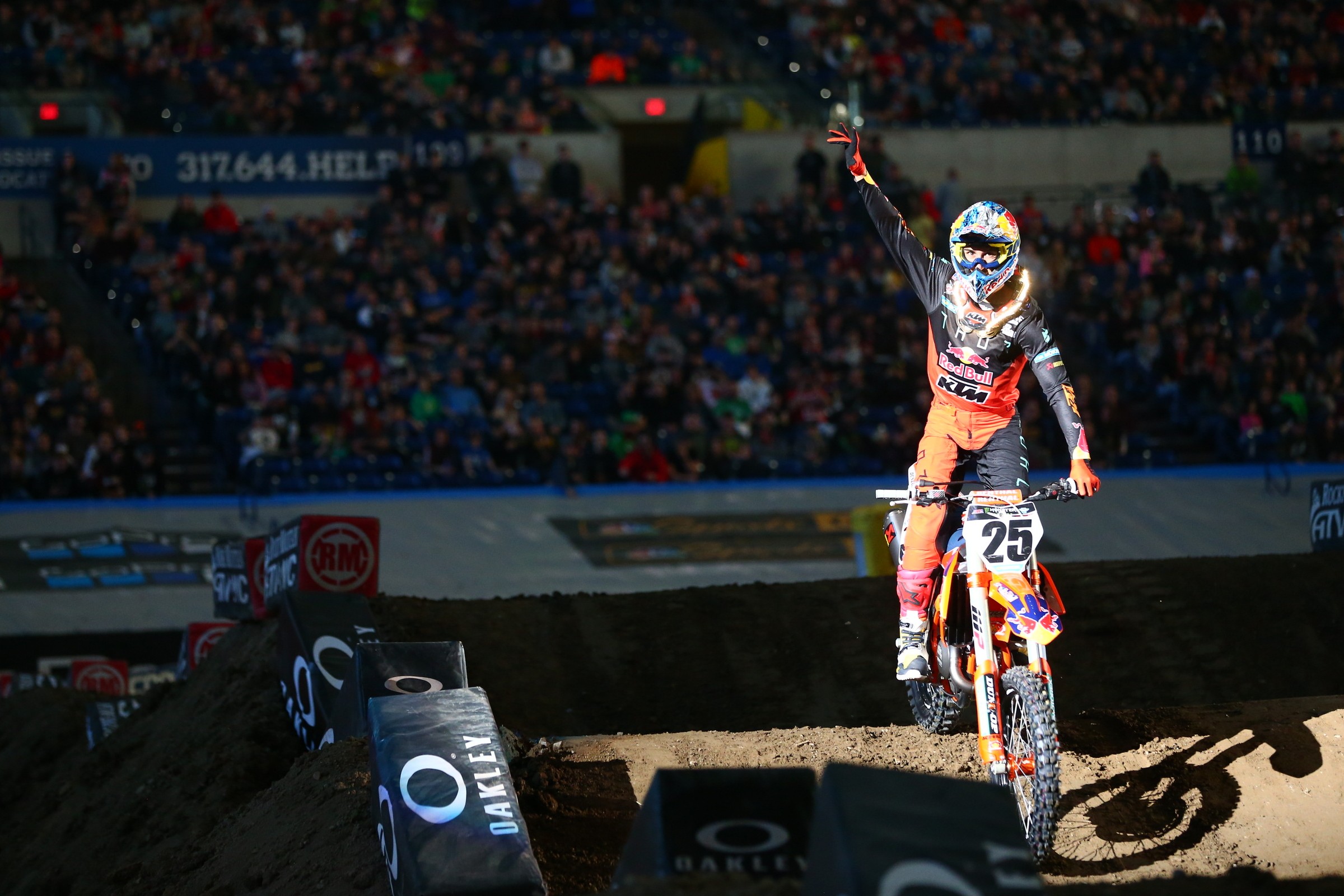 Welcome to the Racer X Race Day Feed, coming to you from Lucas Oil Stadium in Indianapolis. From practice reports to the blow-by-blow from tonight’s program, you’ll find it all right here on the Racer X Race Day Feed. Updates are posted in chronological order, so be sure to scroll down for the latest info. For even more updates be sure to follow us on Twitter, @Racerxonline.

Coming off his best finish of the season last weekend in Daytona, Justin Hill is on fire again early today in Indy. He was nearly a second quicker than second place Joey Savatgy in the first session and was the only rider to dip into the 48s with a 48.560. Savatgy was second with a 49.219.

Hill said that the whoops are the “toughest” they’ve been in a practice session this year.

Points leader Cooper Webb was third fastest with a 49.283. Chad Reed, who celebrated his 37th birthday earlier this week, was fifth fastest behind Eli Tomac.

While appearing on Race Day Live, Reed said the track is going to be really “one-lined” tonight and that he’s striving to put in a fast time to get a good gate pick tonight.

The first practice session was red flagged with about three minutes remaining when Cole Martinez went down hard. He was attended to by the Alpinestars Mobile Medical Unit and practice resumed after a slight delay. We will post an update on Martinez once we know more.

The 450 B session is currently delayed as timing and scoring is not working in the stadium.

Monster Energy/Pro Circuit Kawasaki’s Austin Forkner has had his troubles in practice this year, but not in the first 250 session. Forkner put down a 49.477 late in the session to take the top spot over Justin Cooper (49.695).

Chase Sexton was also in the 49 range with a 49.704 and qualified third. On Thursday, Mitchell Oldenburg celebrated the birth of his first child, and today he’s fourth fastest thus far with a 49.704. Martin Davalos rounded out the top five.

Forkner said the second set of whoops are already “destroyed” and that they have already begun jumping through them. He added that they were still able to blitz the other set.

“The track is really going to emphasis smooth is fast,” he said.

A number of different riders held the top time in the second 450 session. Justin Hill, fastest in the first session, was once again on top of the board early, before points leader Cooper Webb swooped in to take the top time.

Joey Savatgy put down a heater late, though, and qualified fastest with a 48.294. Marvin Musquin made a late dash to take second fastest from Webb. Eli Tomac and Justin Hill rounded out the top five.

“The track is going to be gnarly tonight. It’s breaking down a lot,” said Savatgy.

Dean Wilson was sixth, followed by Blake Baggett, Tyler Bowers, and Chad Reed. Ken Roczen was tenth fastest, just over a full second back from Savatgy.

In his first race back from a concussion, Justin Barcia was 14th.

Cole Martinez, who went down hard in the first session, did not return for the second timed session.

Austin Forkner dropped his time from the first session and was the only 250 rider to post a time in the 48s. His 48.654 was the quickest time in the East Region.

“The track is rutted, by last week was Daytona. It’s not quite the gnarly,” said Forkner, who again pointed out that the whoops will be where the race is won and lost tonight.

Alex Martin made a late dash to the front and posted the second fastest time with a 49.115. Justin Cooper was third quickest with a 49.215.

It was a mistake filled second session for Chase Sexton but he was still fourth fastest with a 49.385. Martin Davalos, Mitchell Oldenburg, Brandon Hartranft, Jordan Bailey, Cade Autenrieth, and Josh Osby rounded out the top ten.

A huge pileup in the first turn started the first 250 heat race of the night and it may be a sign of things to come throughout the night in that first corner.

Monster Energy/Yamalube/Star Racing Yamaha’s Mitchell Oldenburg grabbed the holeshot over Alex Martin, Chase Sexton, and Kyle Cunningham. With four minutes remaining, Sexton took advantage of a mistake from Martin to move into second. A minute later, Sexton moved into the lead for the first time and rode a mistake free race to claim the heat win. Sexton and the team made some suspension changes prior to the heat and he looked much more comfortable.

Oldenburg would hang on for second over Martin. Cunningham rounded out the top five.

Remember what we said about the first corner? It took down points leader Austin Forkner in the second 250 heat race.

Forkner grabbed the holeshot but came into the first turn with too much speed and crashed off the first jump when he veered into the Tuff Blox. He was then run over by another rider but was able to remount quickly.

With Forkner down, Kyle Peters took over the lead with Justin Cooper and Martin Davalos in tow. With three laps remaining, Cooper made a strong move to get Peters for the lead, but Peters blocked him in the following corner, which allowed Davalos to catch, and eventually pass, Cooper. On the following lap, Davalos made his way around Peters and Cooper quickly followed. On the final lap, Cooper made a huge charge and caught and passed Davalos. Davalos would finish second followed by Peters.

Forkner easily made his way into a transfer position and eventually finished fifth behind Henry Miller. Brandon Hartranft, Hunter Sayles, Bradley Taft, and Justin Thompson rounded out the top nine.

A loaded heat race kicked off the 450 proceedings in Indy and it delivered some fantastic racing. Holeshot artist Mike Alessi squeezed Dean Wilson to grab the early lead, but he had a ton of company in Wilson, Ken Roczen, Marvin Musquin, and Eli Tomac.

On the opening lap, Wilson pushed Alessi into the Tuff Blox, which allowed Roczen by to take the lead. Wilson quickly fired back though and took the lead back through the whoops. Roczen then lost second to Musquin and had Tomac all over him for third. He regrouped though and keep pushing Musquin for second. Musquin held off his attempts and even made a run at Wilson for the lead on the final lap but fell just short.

Savatgy, the fastest qualifier earlier in the day, began his charge early, passing Reed for fourth and then Osborne quickly after. Reed actually fought back and passed Osborne and Savatgy at the same time, but Savatgy quickly regrouped and made the move stick on Reed the second time.

Up front, Webb took advantage of a mistake from Baggett when BB wasn’t able to jump the triple and moved into the lead. Baggett actually closed back in on Webb late, but another mistake allowed Savatgy to make the pass for second.

Webb held on to take a 1.5 second win over Savatgy. Baggett, Reed, and Justin Brayton would round out the top five.

Justin Hill, Cole Seely, Osborne, and Cedric Soubeyras will all transfer to the main. Kyle Chisholm, Ben LaMay, and Alex Ray are among those headed to the LCQ.

The 250 LCQ has wrapped up and a big name won’t be heading to the main event.

Kevin Moranz held the early lead over Lane Shaw and Rockstar Energy Husqvarna’s Thomas Covington was also in a transfer position but he made a big mistake and wasn’t able to jump the triple and lost a bunch of positions early. He eventually finished 12th.

Shaw passed Moranz late in the race to take the win with Issac Teasdale and Cade Autenrieth rounding out the top four.

Mike Alessi, of course, grabbed the holeshot in the 450 LCQ and was followed by Casey Brennan, Ben LaMay, and a whole heap of HEP Suzuki riders.

Brennan was shuffled out of a transfer position early as LaMay, Kyle Chisholm, and Adam Enticknap all got around him. Alex Ray, the third HEP Suzuki rider, ran fifth early and was challenging for the final transfer spot before he crashed.

Alessi cruised to the LCQ win with LaMay, Chizz, and Enticknap rounding out the top four. This will be Enticknap’s first 450 main event of 2019.

The Austin Forkner train continues to roll through the 250SX East Region. The Monster Energy/Pro Circuit Kawasaki rider continued his perfect season in East Region-only races with a dominating performance in Indianapolis.

Forkner grabbed the holeshot over Mitchell Oldenburg and Chase Sexton. Forkner pushed Oldenburg wide on the opening lap and it seemed to rattle Oldenburg a little, as Sexton got by for second and he also lost spots to Martin Davalos and Kyle Peters. Oldenburg was finally able to regroup though and made the pass back on Peters and with around six minutes left in the race had worked his way around Davalos and into third.

Up front, Forkner was cruising. He led ever lap of the main event to take his fifth win in six rounds and extend his points lead as the East Region takes a break. After dispatching of Davalos early, Sexton went unchallenged en route to a second straight runner-up finish.

What a ride from Justin Cooper. He was buried off the start and came from outside the top ten to pass Davalos late in the race for fourth. He then went after Oldenburg and was able to make the pass on his teammate on the final lap to snag the final spot on the podium. Oldenburg took fourth.

Davalos finished fifth ahead of Peters, Kyle Cunningham, Josh Osby, Alex Martin, who went down on the start and came from dead last to grab a top ten, and Jordan Bailey.

Marvin Musquin is finally on the board in 2019 after holding off a fellow KTM riders Blake Baggett and Cooper Webb to seal his first win of the year.

Musquin grabbed the holeshot and was followed by Baggett, Joey Savatgy, Eli Tomac, and Webb. Savatgy moved into second early on the opening lap and Baggett also lost third to Tomac.

Around the 14-minute mark, Savatgy over-jumped the finish line and crashed into the Tuff Blox, moving him all the way back to sixth. Moments later, Webb, who had gotten around Baggett for fourth stalled prior to the triple which allowed Baggett back through.

Tomac, Baggett, and Webb all began catching the leader Musquin. With seven minutes to go, Baggett ran up the inside of Tomac to grab second. On the same lap, Webb turned a huge mistake into a pass. He cross rutted coming out of a rhythm section and landed on the Tuff Blox but was still able to make the pass on Tomac for third. Tomac dropped well off the pace after that and finished a distant fourth.

Webb then began to pressure Baggett, who in turn was pressuring Musquin. Baggett went for the pass right around where he got Tomac with five minutes left but couldn’t make it stick and missed the triple, which allowed Webb to close back in and gave Musquin some breathing room. Baggett wasn’t able to make another serious run at Musquin, but he did put distance between himself and Webb on the closing laps.

Musquin held on late to take a 2.4 second win over Baggett, with Webb rounding out the podium. Tomac finished fourth ahead of Justin Barcia, who was back in action after missing the last two rounds with a concussion.

Webb maintains the points lead with Musquin now 14 back.