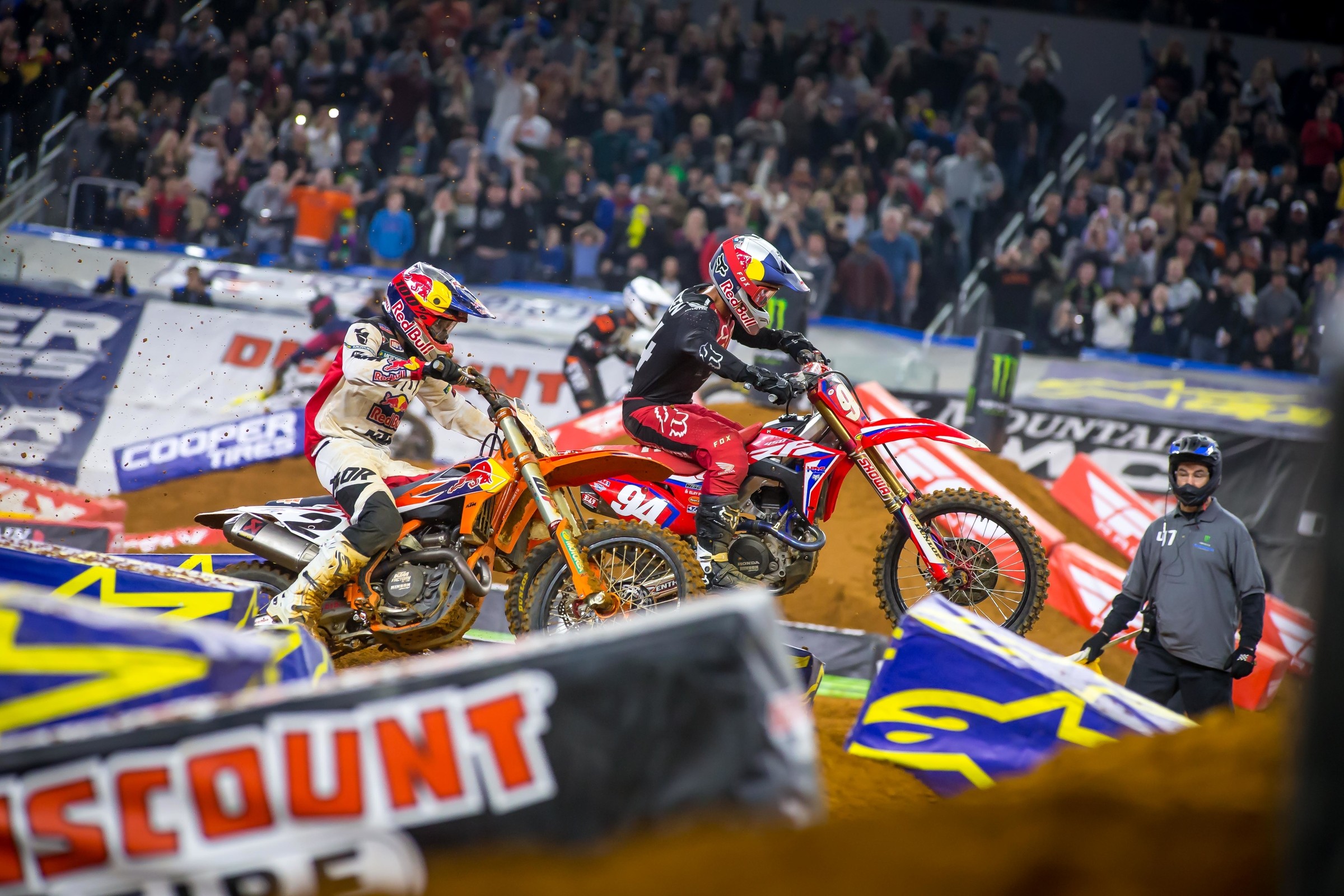 Take us through the last lap from Ken Roczen’s perspective.

Kenny’s last lap was interesting because he had withstood a big attack from Cooper Webb in the previous few laps. He had actually gotten a bit of a lead and when the white flag flew; I thought Kenny had it locked up. He knew where Webb would try to make a move and seemed to have a game plan for protecting his lines. When he sees that white flag, he would probably take a deep breath and prepare to sprint with everything he had left. He did everything right up until the last two corners, too.

The corner before the whoops was almost more damaging than the infamous final corner. Roczen was bypassing the inside rut and losing big time to Cooper Webb. Cooper was almost running into the back of him at the entrance to the whoops and if they weren’t so one lined in the main event, he would have probably made the pass there instead of the next corner. Kenny is usually very aware of where other riders are making time and adjusts accordingly but this time he stuck to his rut even though he had to feel Webb in previous laps right on his rear fender.

The last corner line choice by Kenny was puzzling. He knew Webb was there, he knew there would be some sort of last ditch effort. My only reasoning is that he didn’t think Webb could beat him to the apex since it was so far outside and Webb would have to cross so many ruts to get there. He wasn’t completely wrong, either, as Webb really didn’t execute the block pass but it was good enough to get the win.

In hindsight, maybe he should have tucked inside and blocked as much as he could. I think he was worried about getting cleaned out in a heavy impact if he tucked low. If Webb came in hot, he wouldn’t have time to scrub speed before making contact and they could have both gone down or worse, injured someone. It’s easy to say that Kenny should have just dove inside but it’s a very precarious position to turn broadside at the bottom of a corner when a 450SX main event is on the line. It’s all hindsight at this point but with Webb that close, it’s almost impossible to completely protect against an aggressive move.

Take us through the last lap from Webb’s perspective.

For Webb, he is in the zone those final few laps. He’s come through the pack, the crowd is going crazy, and his adrenaline is pumping. It’s a very different situation than Roczen even though they are wheel to wheel. Webb is free to take any line he wants, leave the inside open, and study Kenny’s strengths and weaknesses. That last lap had to be a frenzy because he was out of time. He would have made a plan, knowing he was faster in the corner before the whoops but also knowing he needed to be right on his rear wheel going into the final corner. The tough part would be in anticipating where Kenny would go in that final corner. If he assumes Kenny is going in deep (like he did) and drives hard off the last whoop, he’s fully committed to contact if he is wrong about Roczen’s intention. With the angle he needs to take to beat Roczen to a deep apex, he has to come in really fast and basically race to the far side of the track across three or four ruts in the process. If Kenny decided to turn down tight, there would be a huge collision with no warning. That’s the risk Webb had to take, though. He would be judging Roczen’s speed exiting the whoops and making a judgment call on where he was going to make his turn. All of this is happening in the moment and most of it is instinct.

Stop me if you have heard this before but this was a hasty decision that should not have been made in the moment. These black flags and disqualifications can ruin a season and my problem is that extensive analysis, conversation, and perspective can change a viewpoint. That takes time, though. Making a quick decision that disallows someone from racing is not prudent in my opinion.

My opinion means nothing in the big picture of the FIM but if you’re wondering, I usually disagree with the decisions made. Emotion shouldn’t be a factor in these decisions and I see it time and time again being involved. I would prefer to see a panel or council make a decision that can remove a racer from an event. That is too damaging of a decision to be made without consulting multiple people.

The tracks have been similar in recent weeks. Why? Thoughts?

I DON’T KNOW. The jumps haven’t been exactly the same but the basic lane layout has been nearly identical. It was great at Glendale but it’s losing its luster at this point. The track designs started the season with innovation and new ideas, but we are quickly falling back into routine. I haven’t looked ahead to future tracks just yet but I am hoping we get back to a different layout completely each weekend.

We have seen Eli struggle in the face of adversity several times now. If he has an issue in the main event or even an outdoor moto, he has shown a tendency to mentally come unraveled. East Rutherford 2017, several of the outdoor motos in 2017, and this past Saturday night are all examples of head-scratching rides. We have seen him respond in exactly the opposite way, too, with rides like Seattle 2017 and Salt Lake City 2017. It’s really puzzling and I truly believe even Eli can’t put his finger on exactly what is happening in those frustrating moments.

Can anyone stop Forkner?

Yes, he’s not unbeatable. Both Chase Sexton and Jordon Smith were catching Forkner at times in the main event Saturday. They both blinked first, making mistakes and going down. Forkner has been lights out in the racing portions of Saturday but his timed qualifying sessions have been much more tumultuous. If he can continue to put in perfect heats and mains, this will be domination, but I just can’t see him escaping these crashes entirely. He is surely the title favorite but I think we will see some drama before it’s over, whether it’s due to his own mistake or his competitors stepping up.

Justin Cooper and Chase Sexton have both taken huge steps forward in 2019. Thoughts?

I expected Sexton to be right where he is. His starts were the only thing holding him back last year both indoors and out. To see him on the podium is par for my expectations. Justin Cooper, however, has opened my eyes. We really didn’t get to see him in supercross last year. He hurt himself at Houston (round 2) and that was it until Hangtown. I am not quite sure why I didn’t expect more from Cooper after such a great summer, but I simply didn’t. I expected him to be a 4-6 guy but he has proven he’s much better than that. He has all of the skills to win but he is going to have to be perfect to beat Forkner straight up. Maybe he won’t have to, though, as we know from experience that this class is anything but stable.