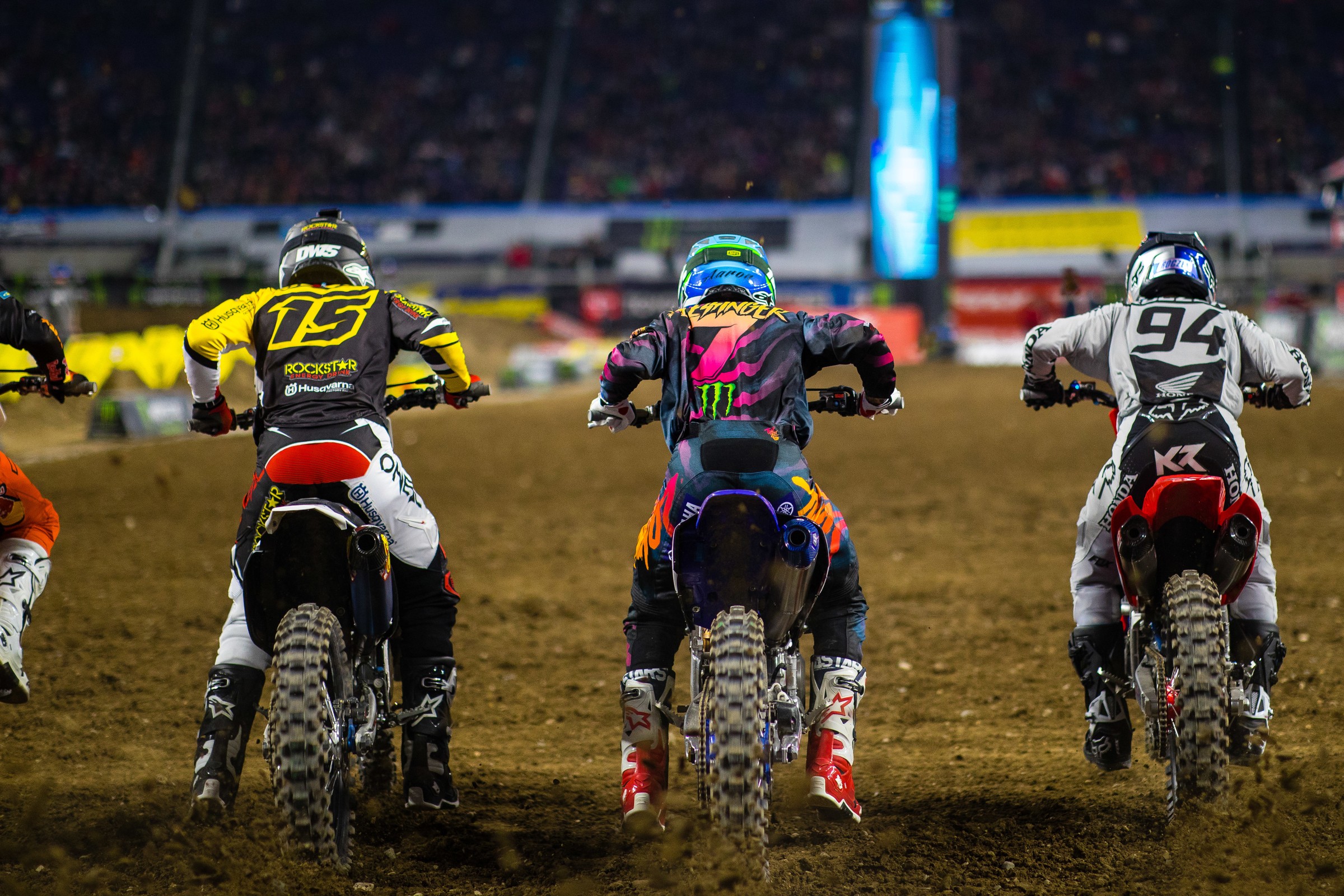 Saturday brings round seven and a trip to Arlington, Texas. AT&T Stadium is one of the most spectacular venues in the world and wows me every time we return. The stadium feels like a city in itself with endless underground tunnels, meeting rooms, and infrastructure. Having a supercross event inside these hallowed halls almost seems surreal but alas, we get to experience it year in and year out.

As great as the venue is, the dirt for Arlington is not the best. It’s usually rock hard and unforgiving, and low on traction but the upside is it won’t really deteriorate throughout the night. The same lines will last throughout the main event and there won’t really be ruts to speak of. Many of the issues riders faced last weekend will be replaced by a search for traction. Many of the settings that riders use at their California test track will be back in play this Saturday.

The start in Arlington is one of the longest we’ve seen thus far. Watch for riders trying to decide when to shift to third gear and if some try to overuse second gear. Many starts are made or foiled in that critical shift.

As riders exit the first turn, they go right into a rhythm section, similar to what we saw in Glendale and Minneapolis. In fact, many of this track’s aspects are strikingly similar to Glendale. The rhythm section should play out a bit differently, but I think riders are going to try to go 3-3-1 on the first lap. On a normal lap, I think they will try to double before but still utilize the same combination down this lane.

That leads into a 90-degree left into an immediate short double. Riders will scream past the mechanics and into another short double and bowl berm. Watch for riders to attempt a block pass here by angling to the inside over the double and meeting the lead rider at his apex. If the lead rider doesn’t “feel” the following rider make this move, there will most likely be hard contact. As we saw in Glendale and Minneapolis, this general layout doesn’t lend itself to easy passing opportunities.

A short double leads riders back across the start straight for the second time and into a 90-degree right. Just like Glendale, riders will try to navigate the inside angle, sliding across the track. They will double from right to left and set themselves up to triple from the left side of the take-off while carrying momentum through the previous double. The triple landing sends riders across the first turn and into a bowl berm. Riders will drive it in hard to prevent any block passes and set up for the single at the exit of the turn. Riders then barrel down the start straight backward (again, just like Glendale) and into a left-hand roller before a hard, left hand 90.

The most interesting section of the track is up next, featuring two intended lanes. The inside has a very small jump but further removed from the turn. The first single on the outside is closer to the corner but larger and therefore allowing riders to jump further. I am not 100 percent certain how riders will attack this section and from what I have seen in the past, it will probably be adjusted on the actual build anyway. I do believe the ideal situation will be to downside the tabletop and then finish the section with a 3-2 combo. That will allow riders to land on the backside of the tallest jump, staying low and fast. The rule for rhythm sections is to always jump from the smallest jump and try to downside the tallest jump. Stay low, stay fast.

The whoops are up next (just like Glendale) and could be tough. Arlington whoops are notoriously difficult and don’t really break down, making them that much tougher. Any hope of waiting them out for an opportunity to jump through them is generally futile. Arlington whoops usually require riders to commit to blitzing so watch for that to be a big factor.

A 180 right sends riders toward the finish line, immediately followed by a long, sweeping left hand turn. This will be one-lined through this corner as the lead rider will protect his inside and disallow any passes. The last jump before the first turn will be one to watch as I think riders will double into the rhythm section a la Blake Baggett at Glendale. That jump will dictate how riders approach the rest of the rhythm so watch for any variations forming.

Can Marty bounce back?

Can Austin Forkner hold it together and dominate like he did in Minneapolis?

Who will be the first to crack in this 450SX title run?

Can Cole Seely get back into the mix?

How will Zach Osborne do in his debut?

Will Joey Savatgy use the momentum to string a few finishes together?

Cooper Webb has won half of the races this season and in doing so, has completely flipped the narrative on his 450 career.

Forkner ran away with the main event win and made it look easy.

Jordon Smith fought through some adversity to start the championship strong.

Mitch Payton has the 250 supercross world in the palm of his hand right now but that could change in the blink of an eye.

Chad Reed hasn’t gotten that win or podium he’s looking for, but he’s putting in solid rides and keeping his team relevant.

Feld made positive strides in the PR department. Meeting with riders and media to open up communication is a great first step.

Eli Tomac started 16th and was only able to fight up to sixth by the checkers. His starts are turning into a real problem as the other contenders are starting at the front consistently.

Martin Davalos just looked off in Minneapolis. Maybe it was the cold, maybe he was too cautious, maybe it was A-Mart knocking him down, but he just wasn’t the usual Marty.

Blake Baggett had a huge crash with a few laps to go, throwing away a possible podium and a gaggle of points.

Christian Craig wasn’t quite ready for action and will miss a few rounds to heal his injured hand. It was a valiant effort to give it a go.

Justin Barcia has struggled as of late. He isn’t flashing like he was to start the season but we still have a LONG way to go.

One of the riders wears a Cowboys jersey during opening ceremonies and everyone goes crazy.

The riders can’t see anything during the afternoon practices as the sun shines through the glass window and into their field of vision.

Thomas Covington finally exhales after holding his breath for an entire day in Minneapolis.

Not to be outdone by their Minneapolis effort, the entire 250 LCQ lineup crashes at least once in the four minute race.