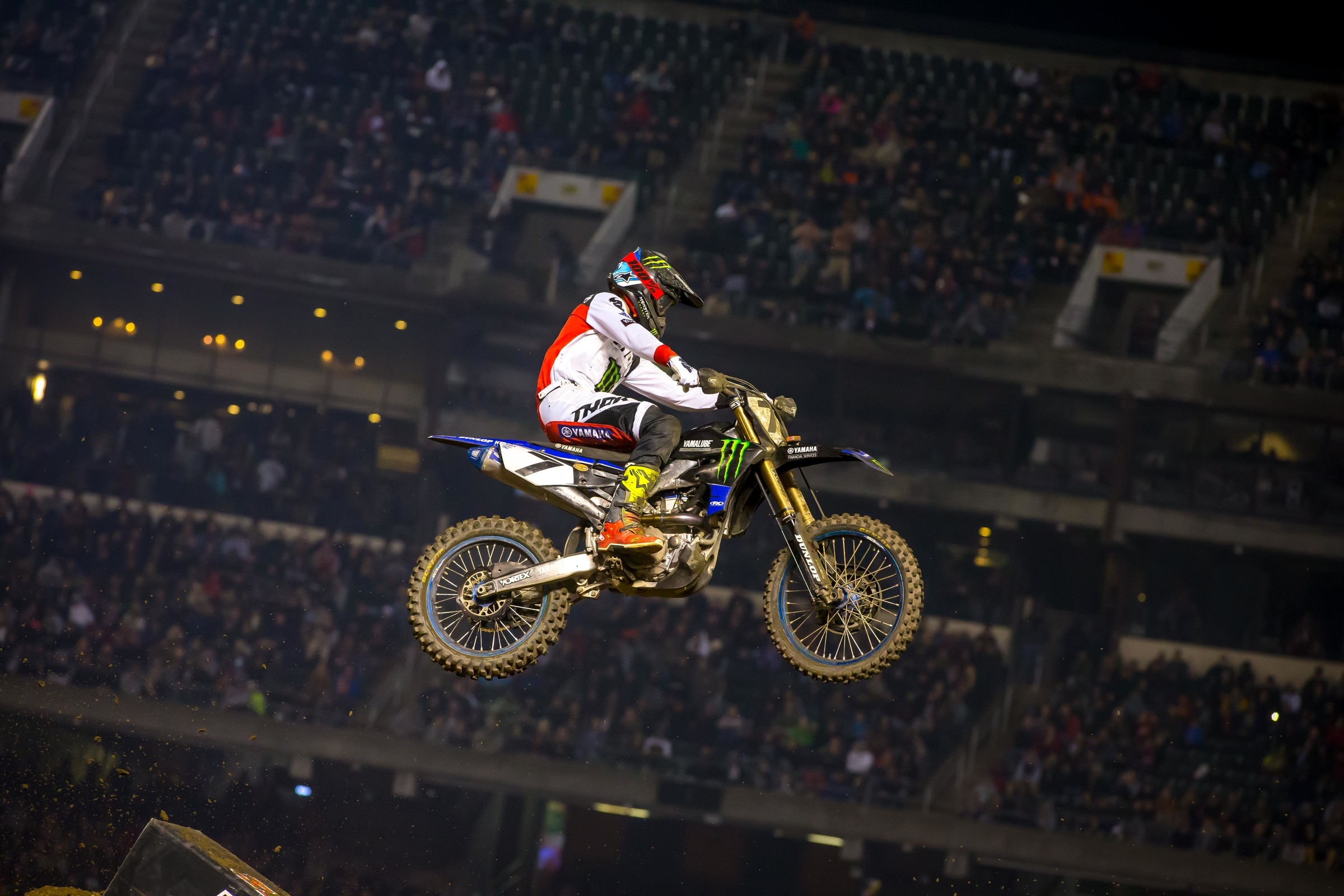 Redux News and Notes From Oakland

Adam Cianciarulo earned his eighth career win at Oakland, which is the most of an active 250 rider.

Place finish for RJ Hampshire, who had sixth straight fourth-place finishes in supercross heading into the weekend (dating back to 2018).

Position Joey Savatgy was in before he had bike problems on lap 10 and DNF'd.

Points between the top four riders in the 450SX standings.

Points between the top five riders in the 250SX standings.

Points deficit from the lead for fifth-ranked 450SX rider Justin Barcia. Barcia crashed hard in the final Triple Crown race in Anaheim and rode with a bruised tailbone at Oakland. He salvaged seventh to stay in title contention.

“Oakland started off pretty good. I felt super good in practice and was super-happy with the bike. I was confident going into the night show and happy to have first gate pick. We had a decent heat race, finishing in second. We had to do some little bike adjustments, just as the track changed. I didn’t have a great start at all but fought my way up to second for a bit. I was struggling in the whoops and started feeling uncomfortable and unfortunately, I went back to fifth. That’s not ideal but we’re leaving healthy. We lost the points lead but only by a couple points; it’s a long season, so if we can take this as our worst race, that’s pretty good. It’s time to regroup and hopefully get back on the podium in San Diego.”

“In the main, he didn’t get a good jump out of the gate and was around 10th in the first turn but made some good passes on the first lap. I think he spent too much time trying to get by [Joey] Savatgy, so by the time he did, he had used up too much energy. That combined with the tough track conditions, and he just ran out of steam. He’s bummed but if your bad day is still going to be a top-five, that’s pretty good. It could be way worse. Now somebody else can have the red plate and we can chase them.”

“Wow. What a day. I had to be really mentally tough. I rode through a lot of pain, but made the best of it. Coming in I knew it would be difficult, but I was pretty optimistic about what I could handle. It was a crazy race for me. It was a difficult track, pretty rough, and I just had to push through the pain.

“It could have been a lot worse. After last weekend’s crash, I thought I wasn’t going to be able to race but I salvaged some points tonight. I feel like I just need to keep moving forward. Hopefully this week I can work on my body and keep feeling better. We’ll be back at it next weekend in San Diego.”

“I really liked the Oakland track layout. There were nice whoops and ruts. Unfortunately, I again struggled with one-lap speed, but I felt like I would be okay for the heat race and main event. I had a decent start in the heat race and finished fourth. I was really enjoying the main event and began to find a rhythm. I was going to try and make some moves forward. Then I landed on Plessinger’s bike when he crashed in a blind spot. I fought back to ninth. I’m entering a new week with confidence. I have the pieces, but I need to start out the day better and carry that into the night show. We’re heading to one of my favorite races of the series this weekend. San Diego has always been a solid hunting ground for me.”

“I had a huge endo over a berm in the second qualifying practice. My injuries are yet to be determined. Needless to say, I could barely ride throughout the night program. My left shoulder was getting considerably worse as the racing continued. On the bright side, we had excellent gains with the bike setup before the big crash. I have a fantastic team of people to help me rehab this week and make sure I am structurally okay to get back to work!”

“Oakland Supercross was a pretty tough one. I was kind of struggling all day. I felt good in the last practice even though the times didn’t really show. In the main, I got a good start but then stalled it on the wall jump. I had to jump off, then someone landed on my bike and bent it all up. I had to pull in twice to straighten it out.

“I’m still happy with the way I rode and the progress we made on my starts, but stuff happens. We’ll move forward. Now that I know I can run with those guys, just need to keep the pace and keep working.”

"I was feeling good and the bike was great all day. It was so exciting and such a good feeling to win my first heat race in the premier class. I was a little squirrelly off the gate in the main but managed to recover quickly and stay in front. Unfortunately, things happen in racing and stuff like this happens to the best of us. I’m proud of my entire team and we’ll have and just keep grinding."

“Practice went well and I felt good. Figured my starts out but had that crash in the heat in the sand and it kind of just spiraled from there all night. A good start in the main and then I over jumped the triple out of the turn into the rhythm and just lost the front. Tweaked my bike up which caused a couple more crashes. A really tough main but I’ll regroup and be ready for San Diego.”

“Oakland was looking like a promising night for the whole JGRMX/Yoshimura/Suzuki Factory Racing Team. I qualified third in both of my practices and won my heat race. I was feeling really comfortable and fast on my Suzuki RM-Z250. Unfortunately, I got off to a bad start in the main event and crashed in the whoops. It took me a while to get going and back on the track. I’m bummed on the result, but I feel like I’m riding really well right now. We are going to get the results. Thanks to everyone on the team for helping me all weekend. I love riding for JGRMX and having like-minded people in my corner.”