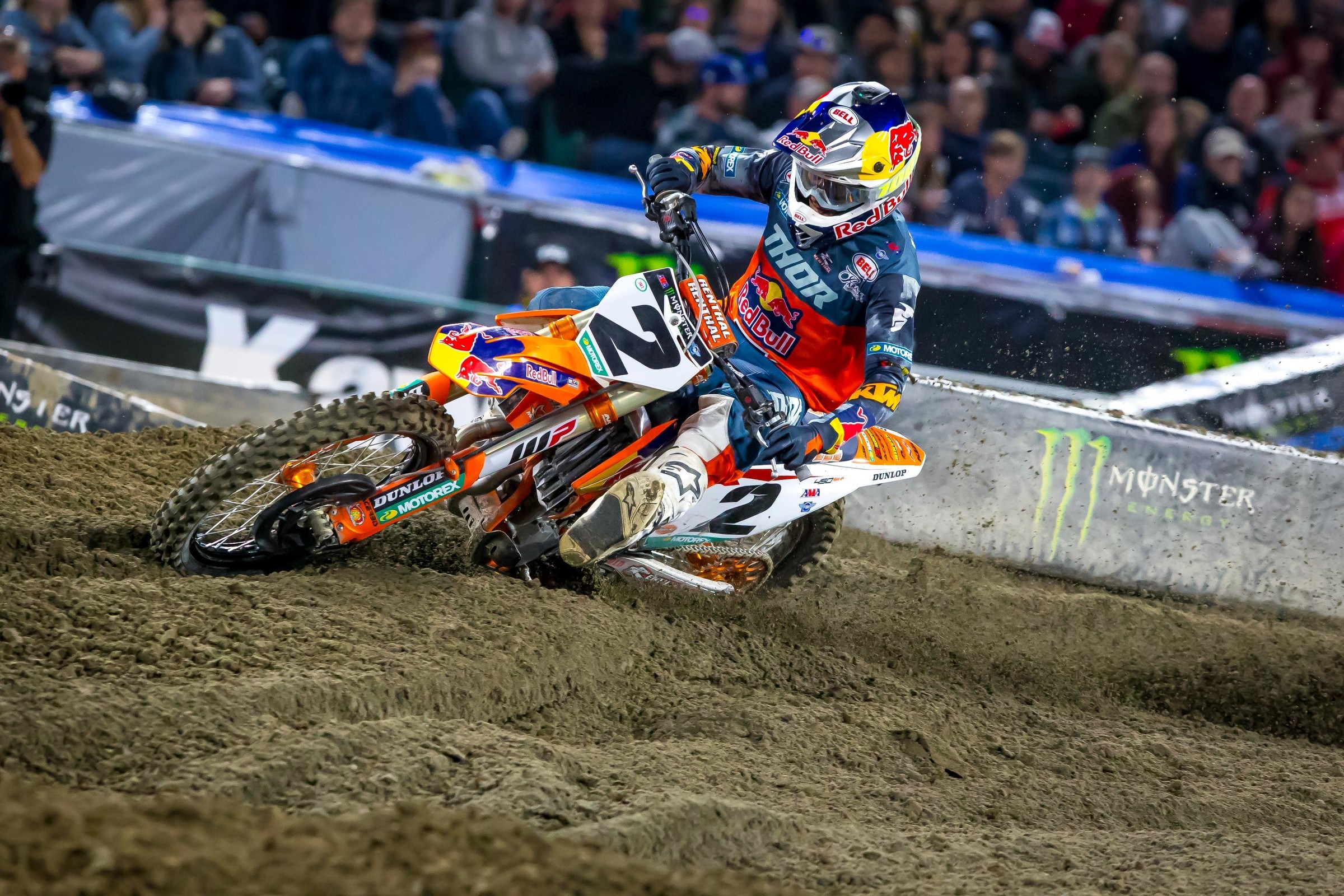 For the second time in as many weeks, we have a first time winner in Monster Energy AMA Supercross. In his 28th career 450SX start, Red Bull KTM’s Cooper Webb grabbed his first career 450 win on Saturday night at round three in Anaheim. Webb won the first two main events in the Triple Crown format and finished third in race three to capture the overall.

Following the race, Steve Matthes spoke with Webb about his night.

Racer X: You’re a 450SX winner. You said you were waiting on this. That’s awesome, man, congratulations. You were on it tonight. Dream come true.
Cooper Webb: For sure, man. It really is. To do it the way in the Triple Crown and win two, it’s for sure a dream come true. After the last two years and last weekend even, it’s just crazy that it happened this quick. This year my goal was to win a race in the third round. It was pretty incredible and definitely makes me appreciate things. The hard work is paying off. Just glad these boys believed in me.

You were on our show in the fall and you gave a great interview as usual and talked about how you’re rebuilding and you’re getting back and you’re not a guy in the championship hunt yet and you got to work on things. But if you check the points standings, you’re a guy that’s in it!
I know. That’s our goal, like I said. Really this is a rebuild year. So for me to win a race, the third one, I guess I’m close in points but it’s cool. I think for me, I knew once I won one I’d have that confidence. That’s what we talked about. It’s awesome. Like I said, to do it after adversity and come from… I hadn’t even been on the podium in a long time, so to do it this way is pretty special.

What do you like about the bike so far? Obviously, your starts have been good. You’ve been fast in some qualifying practices. What are you gelling with on this KTM?
It’s hard to pinpoint one thing. I feel like it fits me. I’m a smaller guy. It’s lighter. The engine is not as powerful. It’s a lot more nimble. You can ride it like a 250. The team and I worked on my starts all off-season and they’ve been good. That I felt like was really holding me back before. Tonight I think my worst start was second, so it was cool. I think it’s just the whole program between Roger [DeCoster], Ian [Harrison], Aldon [Baker], these WP guys working hard. They check all the boxes. It’s motivating to be on a team like that that will do whatever it takes.

I sat next to Filthy [Phil Nicoletti] in the press box all night. He called your win before the first one. I swear to God. He called it. He said, “Webb’s going to get this.” I’m like, whatever, Phil. You’re an idiot, Phil. He was so stoked for you all night. Somehow, he knew about it, and he told me, “It’s just going to take one for the kid.”
That’s what even the whole team has told me. Once you get that taste again, the belief is there. Like I said, for me after that first one, just running up there again, getting used to the pace, actually winning, I feel like a whole new person. It’s cool. It is very special. It hasn’t, I don’t think, set in yet, but we’ll keep digging and keep going.

Roczen made a mistake in that rhythm that allowed you to pull up alongside of him. Did you have a plan before that, though? Did you have some sort of thing you were going to unleash on him?
Yeah, it worked out. I was going to go for that corner. Obviously it would have probably been pretty aggressive, but it worked out. I was going right after he made the mistake anyway, so it kind of made it easy. Then I knew the last turn would be tricky. I was trying to listen and know if he was going to try to block pass me or cut underneath, and there was a lapper. Played it pretty good. It was a sweet race. To have it come to two turns to go was awesome.

What’s Carlos [Rivera] like to work with? Obviously been Dunge’s guy forever. Davi’s guy before that. What’s he like as a mechanic?
He’s awesome. He’s just so smart. All these guys. I think for me it’s more than the bike. It’s more than the team. They’ve matured me and really made me a better person and really worked on my flaws and just got me back to where I need to be and learning. He’s awesome. He’s so knowledgeable. He loves the sport. He studies I think harder than anybody. So it’s cool to be working with him. To me, he’s one of the greatest mechanics there is, so I’m pretty stoked to be able to work with him. Tonight he kept calm and just said, hey, just focus, keep focusing. He was right on it.

Look, we don’t know how this is going to go for you. You got a win here, so it’s a long way out, but Aldon Baker’s program is working again with another guy?
I’d have to say so. I mean, damn. Like I said, for me it’s a whole effort from everybody, but the whole Aldon [thing]—once again, another guy. He’s really helped me mentally and physically. Just such a solid group and guys that push me to be the best. This week, after I was pretty disappointed last week, and we went to Florida and Aldon got on me. It’s easy I think for us as professional athletes and we get, I shouldn't say soft, but we think we’re the shit and can’t be told anything. So for me, to be able to learn from these guys and absorb it I think has been beneficial. My whoops were terrible the last two weeks and we hit whoops about 100 times this week. It’s cool.