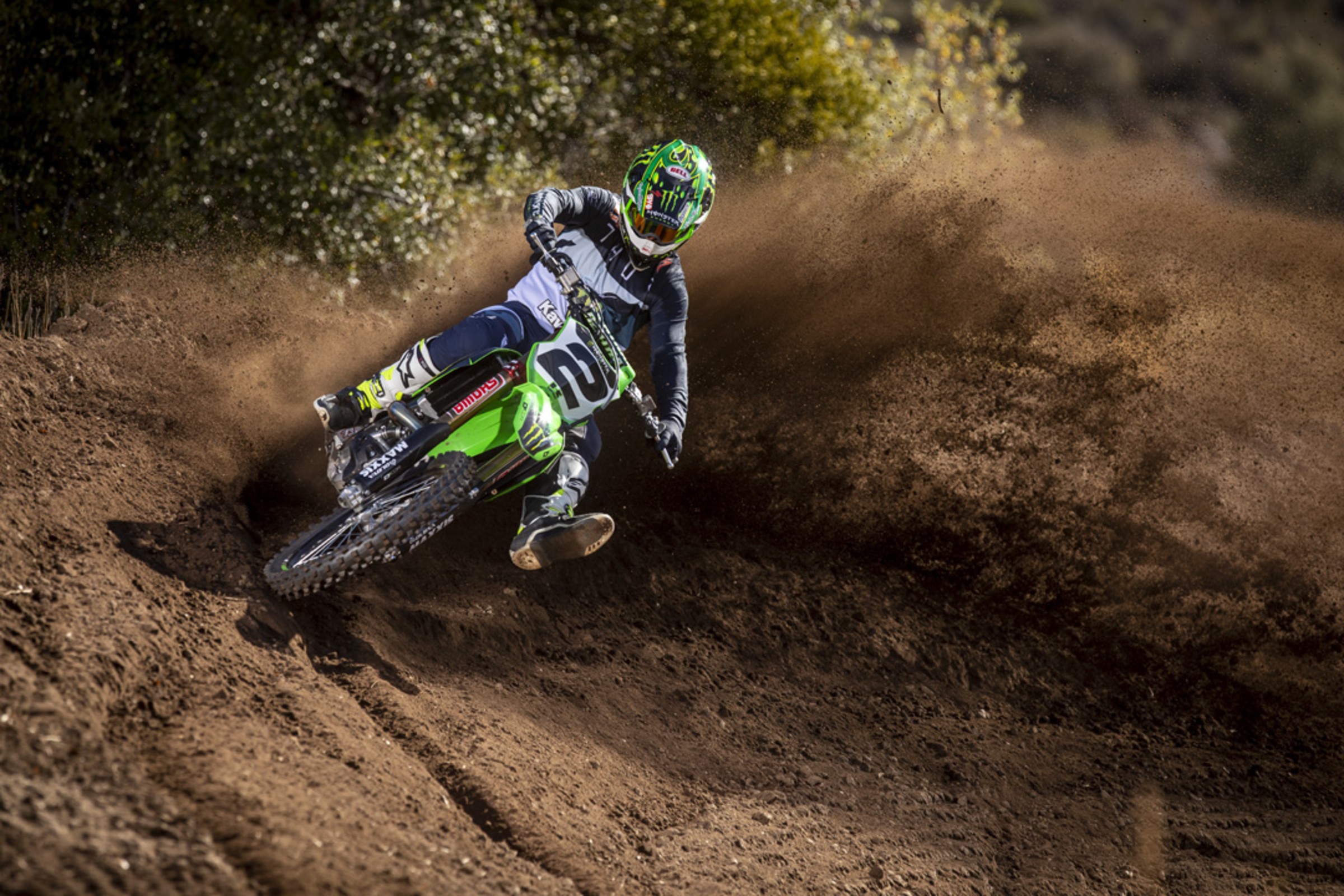 Where Are Jeremy McGrath

Saturday night, January 20, 2001. Edison International Field. Anaheim, California. Jeremy McGrath’s last career supercross victory. “I knew I had a big fight coming, but I wasn’t sure of when because Ricky Carmichael’s results were pretty unstable up to that point," reflected McGrath of the final main event win of his career.

A few days earlier, the best supercross racer in history was beaten, straight-up, in San Diego's Qualcomm Stadium by a kid  named Ricky Carmichael. Carmichael had taken the measure of 72-time main event winner. Exactly one week later up in Orange County, California, McGrath hung tough and won a fierce main event brawl over Carmichael by less than a thousandth of a second.  "That was the best race in five years, I think," McGrath would say later that evening.

This was, to the day, 18 years ago and McGrath would never win another main event. A seven-time Monster Energy AMA Supercross Champion and the winner of 72 premier class main events, not only was McGrath the greatest, most accomplished supercross racer of all-time, he was also the racer who picked the sport up, slung it over his back and helped deliver it to the mainstream.

Racer X: Jeremy, we’re two races into the 2019 Monster Energy AMA Supercross Championship, and today, here at Angel Stadium, we’re now looking at race three. What’s the Jeremy McGrath “low pass fly-by” of what’s gone down thus far in January?
Jeremy McGrath: Well, I think supercross is in a good state of affairs. The good thing right now is that we don’t know who is going to win on the weekends. The first two weekends were definitely quite a surprise I would say. I’m happy that [Eli] Tomac is riding well. He’s gotten a third and a fourth and has three-times, make that 10 times as many points as had last year at this point. Eli is looking good. Jason Anderson was a bit surprising at round one. He went backwards. That was surprising to me. He definitely rebounded strong. I feel like Kenny [Roczen] is riding really well right now and that’s pretty nice to see and it’s good for the sport. And then to see Blake Baggett get that win was awesome. He’s such a nice guy and to see him get that win was really, really awesome. It was also cool for that privateer team he rides for. I know they have factory stuff, but it’s still pretty cool.

Yeah, early on here the racing has been something of a toss-up, huh?
Yeah, I recorded the race last week because I took my daughter out with her friends. I took them to the movies in the Cool Bus. I missed the race and I was recording it and people were texting me and I was like, “Man, don’t text me any results.” It really is awesome because you can go to the track and not know exactly what is going to happen yet. I mean I’m not seeing much consistency, or at least domination, out of one guy, which is nice for all of us fans. Yeah, I think it’s been great. I’m pretty pumped. Round one, and even as much as it rained, it was still a pretty darn cool race. It was cool and it great racing.

That was a big win for Justin Barcia, huh?
Yeah, it was a great win. He rode great. I mean he stood solid the whole time and when it counted at the end, he was that one that was most ready. That was pretty exciting. And Dean Wilson was the biggest surprise of the bunch. It was nice to see him up there too. That was really awesome. I guess after two rounds you kind of find yourself pulling for the underdogs, you know what I mean? Everyone loves the underdogs. Of course I’m sentimental to Eli Tomac and the Kawasaki boys, but I think it’s great for the sport with what we have going on right now. It’s awesome.

As far Blake Baggett’s big win last Saturday night over in Glendale, did you see that coming?
Well, I mean no one would have picked Baggett to win the race. I can tell you that right now. Did I expect it? Not really. However, at the same time and after looking at it and seeing what happened and thinking about it, Baggett’s strong point has always sort of been the end of the races, you know? He’s strong, he’s fit, he works hard and he’s got a lot of endurance towards the end of the motos. I guess maybe to some Baggett’s win was a surprise, but if you really look back, it shouldn’t be that surprising. I was surprised more by Jason Anderson falling off the pace a little bit than I was Baggett winning the race. I was like, “Wow!”

Have you spoken with any of the key racers during the past few days?
I was at Alpinestars yesterday for their national sales meeting and did a little interview. Wilson and Baggett and Tomac were there and I hosted the thing. They didn’t lead on as if anything was just kind of out of the ordinary. I talked to them a little bit. I haven’t talked to Anderson and I haven’t talked to Roczen. I don’t know. Those guys are busy.

Marvin Musquin appears to be strong and steadily getting up to speed. Thoughts?
I think he’s going to come on strong. He’ll probably hit the strong points on the tracks that he really likes. I think he’s probably better when it comes to ruts and stuff like that. He’s going to be a factor. It’s a bummer that [Malcolm] Stewart crashed last Saturday. I guess some of us could have sort of expected that. I mean he’s pretty loose and pretty wild. However, I must say that he was riding awesome. It’s a bummer that he hurt himself. I guess there is no good way to look at it. It’s just a bummer that he crashed, but he’s done that a little bit the last few years. He did show some amazing speed up until he crashed.

Our sport is such a tough deal because the rider has to be so many different things at the same time. The rider has to be in excellent shape, fast, driven, determined, fearless, focused. Add all that up and then toss in the variable of risk and it is one demanding form of athleticism and motor racing. Only one guy can win, correct?
Yeah, only guy can win and it really is unbelievable that you’ve got to put all of those factors into place. Just the risk alone that we have in supercross is out of this world. The risk is frickin’ so high. The amount of risk these guys put on themselves every week just practicing is amazing. At times, it’s amazing to think that they can even make it to the races on Saturday! I mean the 450s these days are big bikes with a lot of power. These bikes are incredibly fast and to think that you have to put in that many hard, hard laps in during the week with that kind of risk only to actually go do it again the next weekend to get your paycheck. It’s pretty commendable that these guys are riding like they are. We  can’t take what we see out there and what these guys do for granted.

I have this feeling it’s going to be something of a free for all year in the 450 class. What do you think?
Yeah, I agree. I think it’s good. I think that we’ve got a lot of guys. So far, so good.

What’s your early take on the 250cc guys?
I think that’s fallen into place exactly where I sort of thought it was going to be. Adam Cianciarulo looks strong—he looks real good. There are a lot of fast kids out there, but Adam finally looks mature enough to be handling it all pretty well. I guess it could all change with a bad start, but so far, he looks good.

I’ve never really asked you this, but in your role at Kawasaki, do you work closely with Eli when it might come to testing, training and racing?
No. I certainly don’t. We go talk about starts and some of those things if he asks about it, but him and his dad have their own program going on. I never insert myself where I’m not asked, you know what I mean? I think I’ve got a lot of knowledge to pass on, but I’m definitely not going to force anyone to use it. They’re going to have to ask for it. My relationship with Eli is great. We’re good buddies and his dad is a good guy. I have a lot of respect for those guys, but again, if Eli needs some help from me, he’ll ask. I’m not going to insert myself until someone asks.