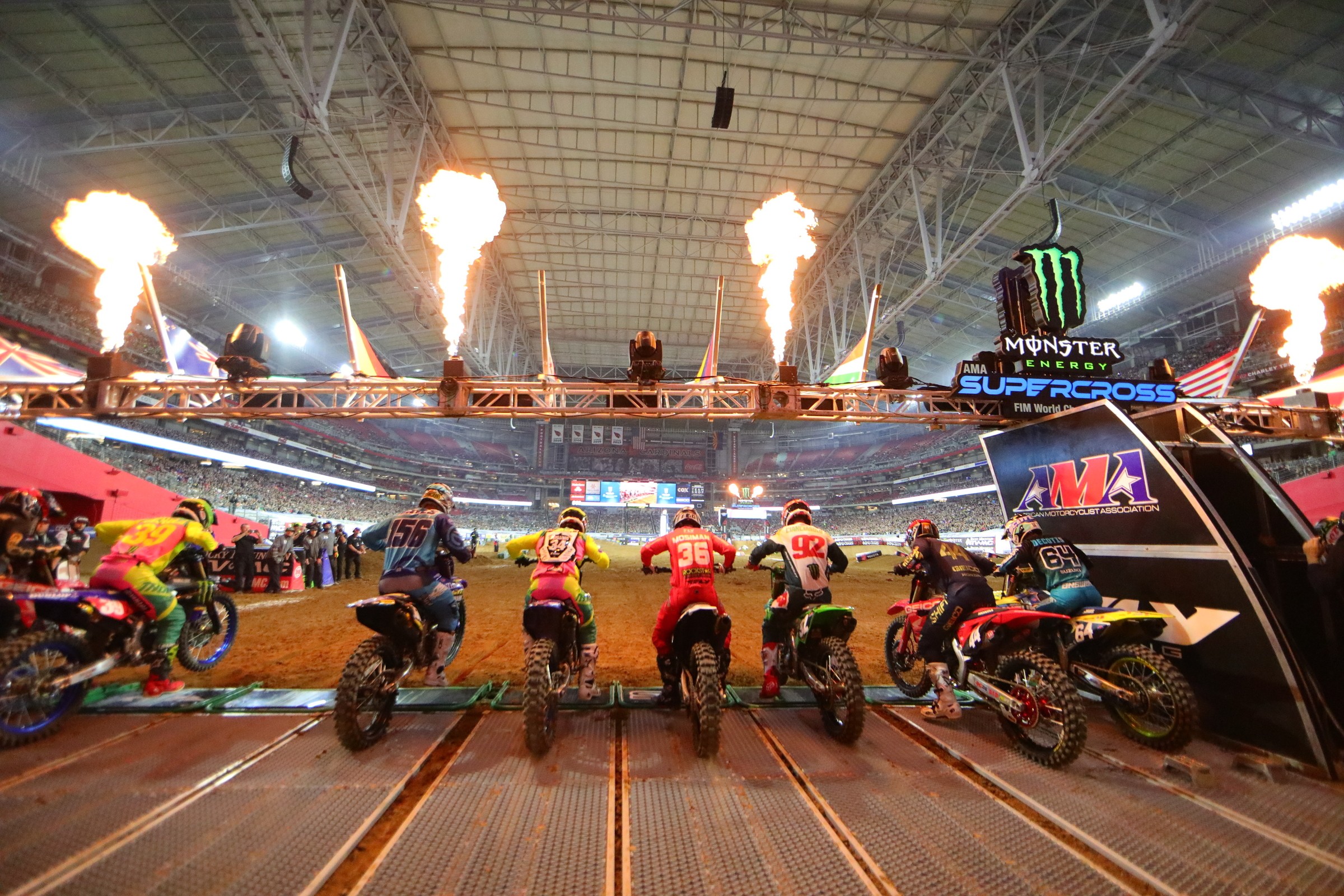 Questions. Racing is full of them, and the reason the gate is ultimately dropped is to answer them. And after a strange season opener that had plenty of eye-popping results, including the defending 450SX champ struggling and finishing fourteenth, there were plenty of questions swirling as Monster Energy Supercross came into the second round. But were they answered? Let’s dive into Saturday Night Live to find out.

First, the fourteenth-place elephant in the room left over from last week. Was Anderson’s subpar performance at the season opener indeed due to nerves, and perhaps the slippery conditions? If you’re going to judge by how he rode in Glendale, the answer has to be yes. Anderson was much, much better this week, even leading laps before surrendering the lead to Blake Baggett late in the race.

“When I was leading I felt I was riding really good but I felt Blake right there,” Anderson said. “But I don’t think I had the speed I was throwing down the first three laps when I had the lead. Sometimes you have a comfortable pace and you’re able to gap, but I wasn’t able to gap Blake. He got up on me and I didn’t put up too much of a fight. Honestly second this week is so good after the way last week went. I was just happy to be up here and battling again. I was happy to be on the podium, even top five. I’ve been riding pretty good during the week. Last week there was a lot going on, just a lot of obligations, I had a ring ceremony during the night show, my heat race was bad, I just wasn’t in the right head space to go racing. So it’s really cool to be battling with these guys.”

Anderson’s second place didn’t come without a bit of controversy though, as he came together with Ken Roczen as he was passing into the lead. The move gave Anderson the lead, but it also resulted in Roczen hitting the deck and losing a few spots.

“We’re just racing you know,” said Roczen, who didn’t seem upset with the move at all. “I didn’t think about him diving inside like that, and I didn’t hear him. The ruts, the way they’ve been the last few years, they kind of go up and they hook down pretty sharp. I was just committed to the inside rut and all of a sudden I saw a white bike there. Luckily my bike stayed running, and I was in fourth. The front two guys pulled a pretty good gap on me so I was just trying to get on the podium.”

“I’m just trying to stay super neutral,” continued Roczen. “I don’t let my highs get too high or my lows get too low. We got a start tonight and that makes life easier, I was super happy after not getting good starts last week and having to weasel my way through. We’re just trying to be patient and play a waiting game, I haven’t made it past the first five rounds the last few years. For right now we’re just keeping our cool.”

While both Roczen and Anderson posted good results, nobody’s night was as good as Baggett’s, who logged the first 450SX win of his career in Glendale. For a while it didn’t look like Baggett would be able to catch Anderson, but he was able to find his groove as the race wound down.

“You’ve got pretty much twenty factory bikes out there and ten guys within a second,” Baggett said. “It’s just being in a good spot, and having a little bit of luck, and all that. It hasn’t sunk it yet, but it’s one of those things where you get one and now I’m already feeling like I can’t wait for next weekend. We were banjoing back and forth and I was checking the timer to see how much was left. There was a point where I thought I waited too long and didn’t throw it in there. It’s a bummer that it’s my first win but my team owner, Forrest Butler, wasn’t able to be here. So sorry guys, I’m gonna have to get another one of these when he is there!”

Malcolm Stewart went down hard in the first half of the race, prompting a red flag and a staggered restart. Like last week in Anaheim, Stewart was riding extremely well and was on his way to notching a great result before crashing. Only this time he wasn’t able to get back in the race, and we later learned he’d suffered a broken femur. He’s scheduled for surgery early Sunday morning. No matter who you are or how you look at it, it’s a blow to the series. Stewart started the year out great, but now we’ll never know what kind of results he may have been able to pull in.

Neither Justin Barcia nor Dean Wilson had the nights they were looking for after doing so well last week, and afterward both riders spoke about not being able to ride as well as they would have liked.

“Tonight was difficult, to say the least,” Barcia said. “It was a tough day for me. I never got really comfortable on the track. We made a lot of bike changes and we got better and better every time, but just never got super comfortable and didn’t ride like myself. Sixth is not too cool after a win, but I made the best of it. There’s nothing really to be said besides that I didn’t ride that great today. We’ll try again next weekend.”

“It wasn’t as happy jolly tonight as it was at A1, that’s for sure,” Wilson said. “I qualified almost fastest at A1 and tonight I was twelfth. I was just kind of trying a bit too hard and not really connecting the track. It was a good night though, I ended up eighth, I pushed to the end, and I’m safe. I’ll take that and move onto next weekend.”

Both riders also had issues with each other during the heat race, and while they seemed quite heated as they pulled off the track, neither one was exceptionally angry following the main event.

“We got super close a few times and there’s no need for it,” Wilson explained. “It’s a heat race. Let’s all just get through it safely. I’ve been injured enough and I don’t want to get injured again, especially when it’s not my fault. I said at the end of the race he was riding like a madman. I said he was crazy and he flipped me off twice. I just let him know that I’m not going to put up with that. I’ve seen him flip off so many people, including his own teammate last year. I’m not going to put up with it, and I just told him to cool the beans, it’s a heat race, let’s all be safe. He flipped me off and I’m not putting up with it.”

“I don’t know what was really going on with that heat race,” Barcia said. “He [Wilson] said I cut over on him or something and he tried to take me out. He smashed my hand. I don’t know. I know what he was talking about before the finish line, but I didn’t intentionally try to jump into the side of him. That wasn’t my goal at all. It was just a slick track and I came over a little bit. I understand he was probably mad, but we don’t have to fight after the race [laughs]. He got in my face and I pushed him out of my face. I saw it on the TV broadcast and they were trying to make a big deal out of it and saying I was getting in fights and that I needed to be more serious about this championship. It was stupid, it was no big deal. He was mad and that was pretty much it.”

In the 250 ranks Adam Cianciarulo put his troubles from last week to rest by recording a wire-to-wire win. The Monster Energy/Pro Circuit/Kawasaki rider was never challenged and beat second-place Colt Nichols by almost ten seconds.

“It’s tough. The whole off-season I spent not wanting to make the same mistakes I made last year,” Cianciarulo said. “I made a lot of changes to do so. Last week I almost had the holeshot, I could see the holeshot and then I hit that bump on the inside, I went off the track, I went off the track five or six more times. It’s tough, it’s tough. I did make a lot of changes and I do feel like I’m a different rider, but last week I proved I’m the same. We’re focusing on this week we don’t need to talk about last week too much.”

Cianciarulo also said he felt his win tonight is a sign that he’s moving in the right direction.

“I’ve always worked closely with Nick Wey, but now I got a little apartment out in California and he pretty much lives right across the street from me. We’re working on technique stuff, and being stronger on the bike,” Cianciarulo said. “You guys always see me throwing down the heaters but looking like I’m about to die. I’ve been working on being stronger on the bike and making this all more repeatable. I’m glad to get this win so it looks like we’re going in the right direction.”

Coming in second was Colt Nichols, who expressed dissatisfaction with his initial performance in the 250SX main.

“The wheels came off for me at the beginning of the race, tried to do a little too much too soon,” Nichols said. “I saw Adam [Cianciarulo] out front and I knew I needed to go, but I was just trying to rush everything. The little pockets, you had to be patient in those, but I rushed it and it showed. I went backward pretty quickly. I was able to come back, but definitely the first half of the race wasn’t that great.”

Taking another third was Shane McElrath, who mentioned how difficult the Glendale track ended up

“It was a really tough track, required a lot of patience and focus,” McElrath explaind. “The whoops were probably the hardest part. They weren’t that big, but in practice they started having the black marks on them, and then the track crew couldn’t do anything with them. They were tricky. Required proper body position and technique there, and I made some mistakes. It reminds me of the test tracks, but this week we had a lot of rain.”

McElrath would go on to say that, while he hasn’t won yet (he won the opener the last two years), he’s feeling good about where he’s at in the championship.

“I came in really confident and in a really good position, but I wasn’t so much wanting to win the first one,” McElrath said. “I mean, it’s cool to win, but I felt like I was maybe peaking too early. So this year I kind of did the same thing, but I think we’re in a good position championship wise. We’ve been slowly been progressing the first two rounds, but it hasn’t really showed. I’m looking forward to the Triple Crown next weekend and I’m ready to keep fighting.”

Dylan Ferrandis took sixth, which isn’t terrible, but it’s also not what you might expect from him, especially after he was second just one week ago. But as far as sixth-place finishes go, this one was good. Ferrandis went down early in the 250SX main and lost a ton of spots. After regrouping he started picking guys off and did well to charge back to sixth. He leaves round two fourth in the points behind Nichols, Cianciarulo, and McElrath.