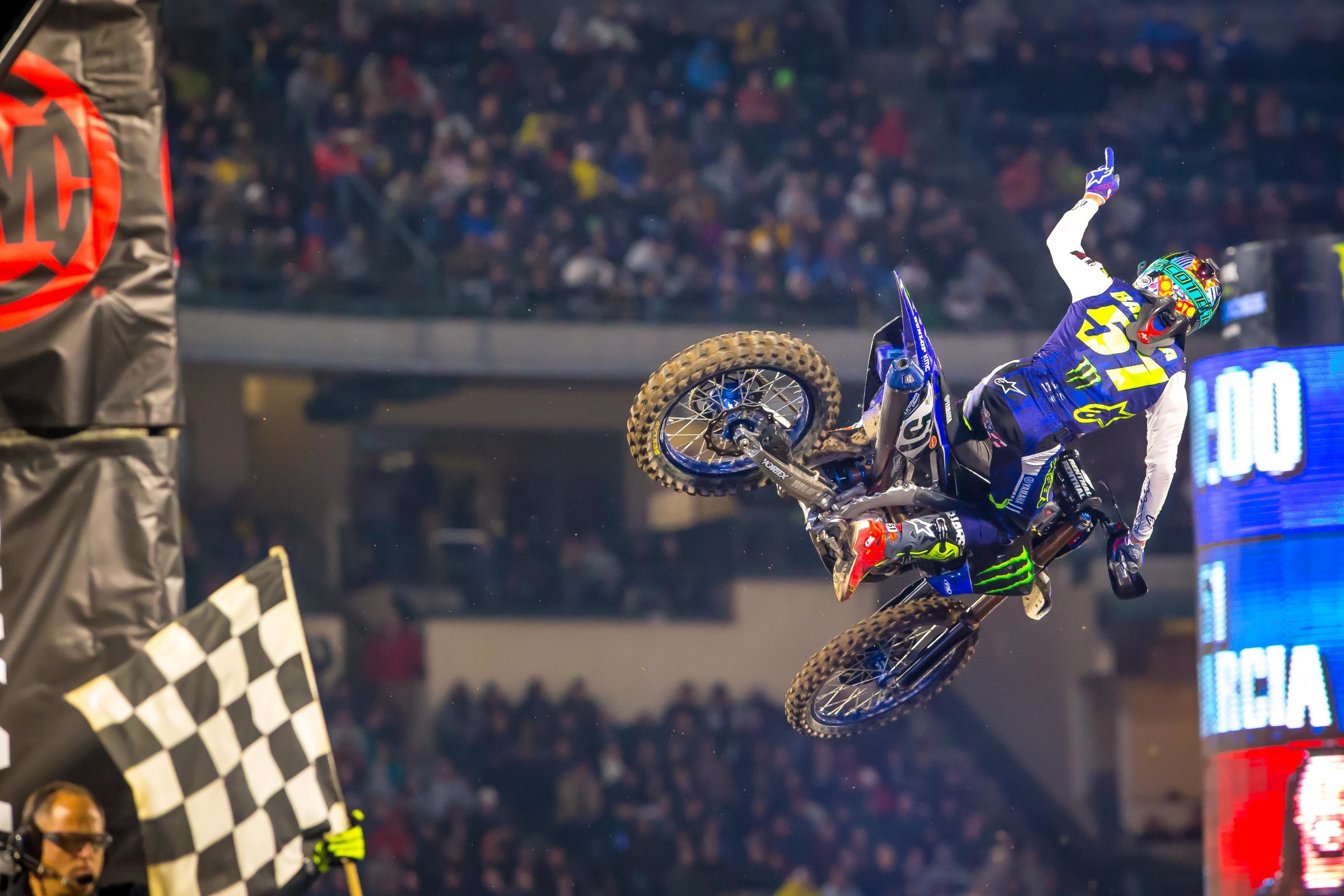 Round One, at Round Two

Don’t worry, we're not putting any kind of asterisk on last week’s race due to the wet conditions. Though soaked, the track actually held up pretty well and most of the guys were still able to handle all the jumps and obstacles just fine. That said, you can’t help but think things may have been a little different for some of the riders had things been dry. For starters, there probably wouldn’t have been as many crashes and slides in the first turn if it wasn't wet. Fortunately, we’re guaranteed to have a dry track in Glendale, where race organizers can simply close the retractable roof if any precipitation comes through. So if you had any predictions for the opener you threw out the window because of the rain, bring them right back for round two. –Aaron Hansel

Cooper Webb took fifth place last week at A1. No surprise there—Webb’s a top-shelf talent and seeing his name in the top five is far from shocking. What is impressive is how he got there. After going down in the first turn of the 450SX main event, Webb remounted and rejoined the race in near dead last. Undeterred by the giant task ahead, the Red Bull KTM rider went to work, steadily picking off riders as he rose through the pack. By the time the checkers flew he’d worked all the way back up to fifth, and even set the fastest lap of the race doing it. Look out for Webb in Glendale. If he’s able to avoid further first-turn misfortune, he just might be a factor up front. –Hansel

That’s how many laps Dean Wilson led last week in a rainy season opener. That’s the good news. The bad? He ended up surrendering spots to Justin Barcia, Ken Roczen, and Eli Tomac as the race wound down, causing him to finish off of the podium. Even so, fourth is a fantastic finish, even if it doesn’t feel like it after leading the majority of the race. In fact, it’s one of the most impressive performances of Wilson’s 450SX career to date, which has got to be a confidence booster. We’ll see if he uses it to get on the box in Glendale. -Hansel

It’s been quite a while since Justin Barcia has come into a season of Monster Energy AMA Supercross without facing any sort of issue or extracurricular challenge. He dealt with multiple injuries during his time with JGR and had only recently become part of Yamaha’s factory effort as a fill-in rider last year when he landed on the podium. This year is different. Barcia’s had an entire year with the team and is 100 percent healthy, and it showed as he patiently waited for the right chance to pounce on the lead at A1. Now that he’s got a solid situation going, as well as some momentum, he could do some serious damage to the competition again this weekend. -Hansel

Raise your hand if you expected Colt Nichols to dominate the 250SX West Region opener at A1. If your hand is up, put it down because you’re lying. That’s not meant in disrespect either—we knew Nichols was going to win one of these things sooner or later. But to get his first win at the first round of the season, in a stacked class, in such challenging conditions? No way! But dominate he did, making it very clear he’s ready to do some winning in 2019. We’ll see if he can go back-to-back in Glendale. -Hansel

Aside from Cooper Webb’s late charge to fifth, the Baker’s Factory struggled at the opener. An off-season knee injury, and lack of adequate off-season prep as a result, seemed to affect Marvin Musquin as he finished eighth. Meanwhile, defending champion Jason Anderson was, uh, not the Jason Anderson we’ve seen the last few years, as he started up front and dropped all the way back to 14th. “Man yesterday did not go well… kinda overwhelmed with everything going on and wasn’t myself at all,” Anderson wrote on social media following the opener. “Looking forward to bringing it back around in the next rounds…” We are only one round down with 16 more to go, so no need to overreact; yet, if Musquin and Anderson don’t want to be digging out from a big points hole all year, they’ll need some strong finishes on Saturday. -Chase Stallo

“It sucks because I’m a different rider than last year but I didn’t show anything to prove I’m not,” Adam Cianciarulo told our Steve Matthes following a Helter Skelter performance at the opener. AC was fastest in qualifying, and won his heat race, but had problems in the main event—going off the track twice, crashing, and getting taken down by RJ Hampshire after he made an aggressive move in the prior corner. Deep breath. Despite the craziness of the main, AC still took fifth and limited damage to his title chances. He’s certainly fast enough to win this weekend; we’ll see if he can limit the mistakes in the main to get it done. -Stallo

It sounds strange saying this, but last Saturday was the first time in his 450 career that Malcolm Stewart had raced Anaheim 1 (he raced it twice in his 250 career). Stewart, who since moving up full-time in 2017, has entered the season late due to setting up his own team (2017) and getting a fill-in ride (2018). This off-season, there was a ton of talk about a new Mookie. He had support for an entire off-season with Smartop/Bullfrog Spas/MotoConcepts Honda. He was training seriously, and even brought on Gareth Swanepoel. But until the gate actually drops, it’s hard to tell how much a difference it will make. If the opener is a precursor to how his season will go, well, we could be in for a career year from Malcolm. Before sliding out, Stewart was applying serious pressure on Dean Wilson for the lead, and was running quick lap times (he was fourth fastest overall). Let’s see if Mookie can continue his strong start this weekend. -Stallo

Given his performance at Anaheim, and his rides before his injury in 2018, Ken Roczen is due for a win soon, right? Dating back to last year (and excluding his DNF at San Diego), in his last six races, Roczen is averaging a third-place finish and has four podiums. “It’s good to get out of here healthy and with a solid podium,” said Roczen in a statement after A1. “The conditions were tough; they can obviously play in your favor but they can also bite you bad.” Could Roczen grab his first SX win since January 14, 2017 this weekend? -Stallo

Since the move from Chase Field (baseball stadium) to Stat Farm Stadium (football stadium), Glendale has become one of the best tracks on the schedule. This year, on paper, seems to hit the mark as well. It features a long start straight, a lot of tricky rhythm sections, and hopefully a tricky whoops section (we’ll know more on that once the track is fully built). Jason Thomas went in-depth breaking down the track yesterday but the rhythm sections will certainly play a factor on Saturday and is worth watching qualifying to see which riders are nailing them early in the day. -Stallo