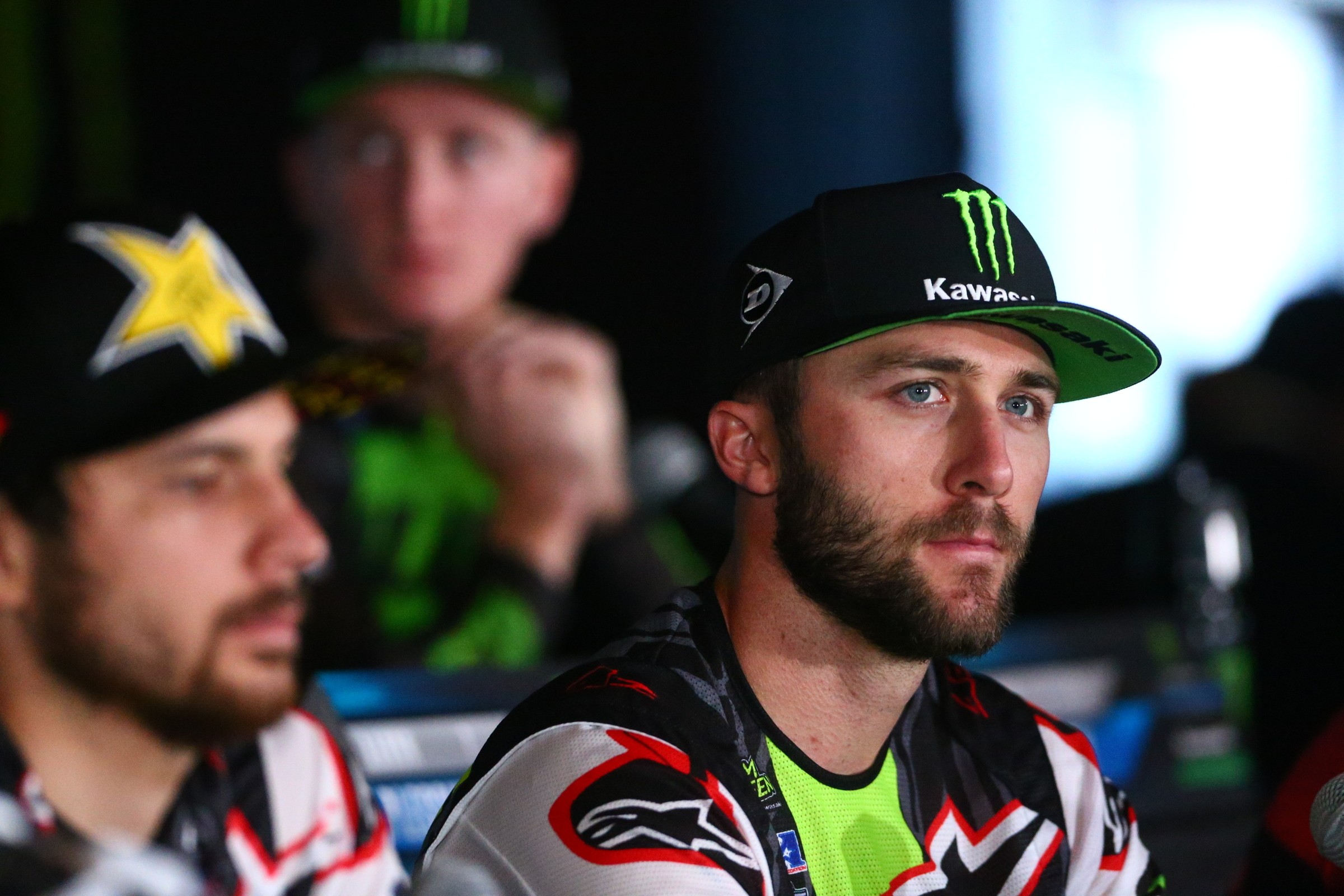 Insight News and Notes From The A1 Press Conference

Ah, the opening round press conference. Lots of nerves, lots of questions, and sometimes answers.

Eleven riders were at the presser today held at Angel Stadium, host of round one of the 2019 Monster Energy AMA Supercross Championship. The riders ranged from Chad Reed, who will be making his 18th appearance at Anaheim 1 in the premiere class, to rookies Joey Savatgy, Aaron Plessinger, and Justin Hill (fellow rookie Zach Osborne is out with a collarbone injury), who will be making their first.

“I’m excited,” Reed said. “Even though it is my 18th straight year doing this, there is a lot of sense of new. Having a rookie [Hill] on the team [JGR/Yoshimura Suzuki] and some younger kids in Enzo [Lopes] in the Lites class… being around a younger group of guys and just feeding off that. LaRock’s a pretty tough dude, so I need to avoid him over the next 24 hours and we’ll try and break that record.”

Despite winning his first career 450SX title last May, Rockstar Energy Husqvarna’s Jason Anderson is still seen as an “underdog” by some. We’ve talked about it quite a bit this off-season, but since it was brought up again at the presser, we’ll address it.

Anderson was asked about this comments on the 2019 Monster Energy Supercross Season Preview Show on NBC, “I’m going into 2019 and people still don’t think the same of me, you know?” he said on the show. “They still kind of think I’m the underdog. They don’t think I can win it again, but I’m going to try my butt off.”

In the press conference, Anderson was asked if that motivates him or makes him angry. “I wouldn’t say it angers me or motivates me, I kind of just do what I wanna do. I have goals myself that I set out and that I want to accomplish. In that deal… I still feel like I’m the underdog from Instagram or whatever, but it’s true. I mean, Eli [Tomac] did win a lot of races last year and he kicked my butt most of the weekends, but at the same time I really want to come out this year... just for myself to be up there and in the battle for the points again. It’s just a goal I set for myself.”

Honda HRC’s Ken Roczen, once again decked out in a suit, said he took some time off after competing at the Motocross of Nations for Team Germany at RedBud in October and that he started his off-season training later than usual.

“In previous years, I feel I started peaking in mid-December or somewhere around there and still had plenty of time till the first race. This year, it kind of seemed to work out just perfect coming into this week. I’ve been feeling really good, super consistent on the bike, and I’m actually happier than I’ve ever been with the bike.”

“My arms are the best that they’ve been since all the injuries,” he said. “It’s pretty much like nothing ever happened to me.”

Since we’re on the subject. Red Bull KTM’s Marvin Musquin was asked about his knee injury sustained prior to Paris Supercross and how it affected his training and off-season.

“Well, definitely a lot different than last year, that’s for sure,” he said. “Last year was an awesome off-season, but I take it how it comes—it’s the way it is. A little issue with the knee, but we’re here and I was able to get some time on the bike. Got it all fixed, and right in time. That was the goal.”

Since we’re on the subject. Rumors escalated this off-season about a back-injury Eli Tomac may have suffered. Mum was certainly the word from Tomac and the team leading up to Anaheim, and we didn’t really get an answer at the press conference.

When asked about the rumored injury, Tomac said: “I’m good. You guys will see me ride here in a little bit. Doing motos this last week and the whole off-season was fine. We’re ready to rip.”

You can watch the entire press conference below: