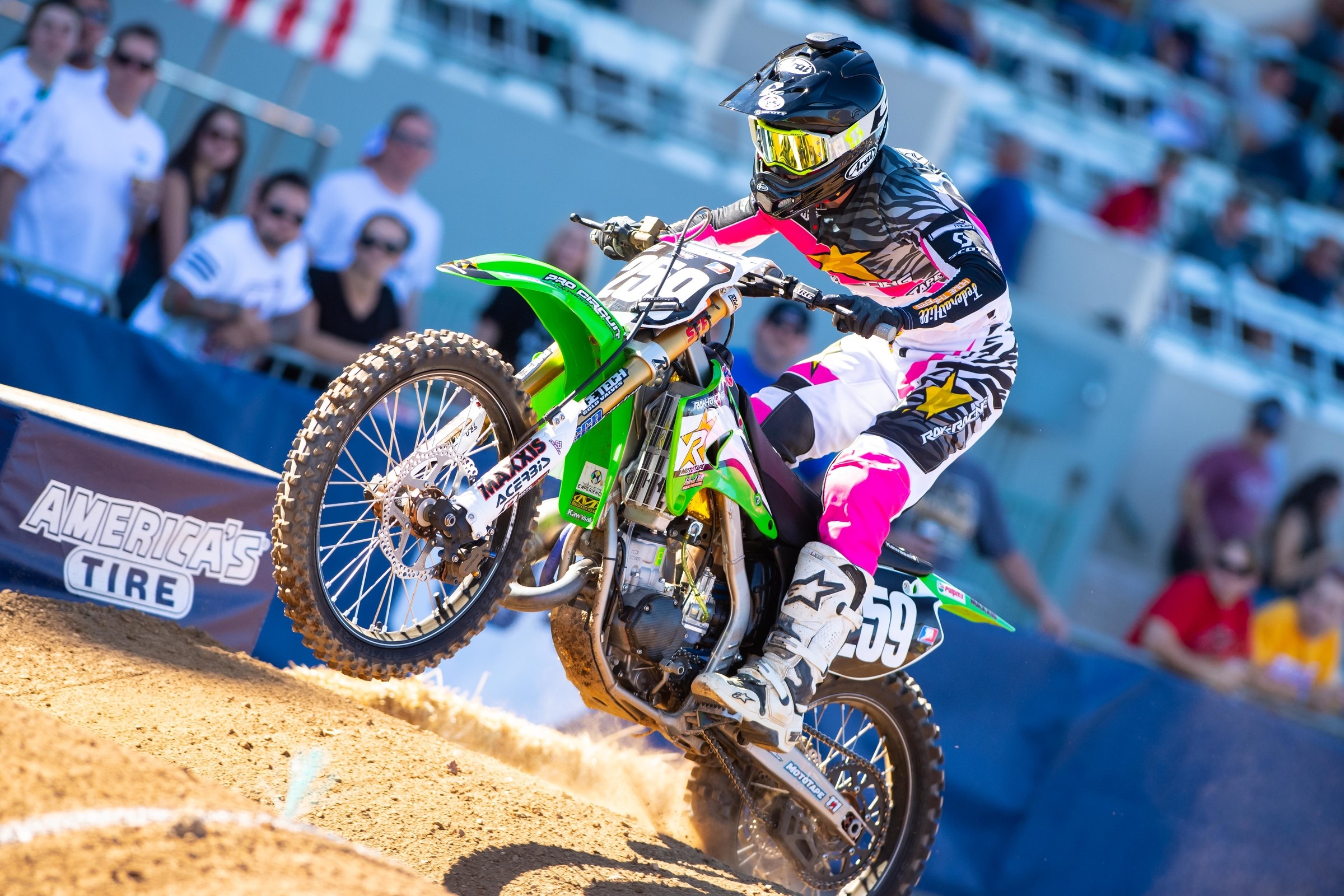 Red Bull Straight Rhythm has come and gone but we've grabbed up two riders who lined up behind the start gate for their take on their bikes, the race, and their results. Round of applause for AJ Catanzaro and Ryan Sipes.

1. We’ve heard about your sick bike build—but how did it actually perform? How cool was it to be on it?

The bike could not have been any better for a 2004 racing against modern bikes. I would say the biggest disadvantage is that I had outdoor suspension, but even that performed as well as outdoor suspension could have on that type of track! The Lectron carb made jetting a non-issue, which was nice! Riding a 125 on that track was just a blast, because it made even the easiest obstacles very difficult.

I found the race was far more intimidating than a normal supercross. There was a huge break between the timed qualifying and our bracket racing, so we went into a 45 second all out sprint with zero warm up/sight lap. Having all eyes on you and knowing one mistake pretty much spelled the end of your race was also a little scary.

With that being said, it definitely took me a few races to get warmed up. Luckily, my whoop speed saved me quite a bit and I could make up time even if I was a couple bike lengths behind coming in. Going against Carson Brown, he was doing a 2-3-3-2 as opposed to my 2-2-3-3, and it was about three bike lengths faster. That made life very difficult to try and get the win against him.

3. What did you learn now that you’ve done it?

Straight Rhythm will quickly teach you the importance of attacking every little obstacle on the track. You can always go a little faster and stay a little lower, and I think it’s a good reminder before diving into my preparation for SX. It also teaches you not to give up. I felt like there were multiple occasions where I seemed like I was way behind, or missed the triple in the rhythm, but still just continued to attack the track for everything I had.

I also learned that I kind of like just racing in a straight line. Forget this whole corner thing [Laughs].

Bonus: Did you practice the dance moves in advance?

No I did not practice any dance moves, although I must admit I’m much better at the worm than I expected. Just a mental note for next time, be sure your worm zone is clear of rocks before you begin. Ouch.

1. What was your bike situation for the race?

I rode a 2019 Husqvarna TC250. It was a magazine test bike but only had a few hours on it. It was totally stock but the thing ripped! WP was great in a pinch and got some suspension set up for me on Friday. I don’t have my own supercross setting anymore so we adjusted on it all day to find the right setup, but the WP guys helped me out a ton with that too. The perfect scenario would have been to test for a week or two beforehand, but we did the best we could. I thought the bike was good.

2. How was your preparation? You’ve done a lot of everything lately?

I rode my Straight Rhythm track for 30 minutes on a four stroke with moto suspension. Probably could have been a little better but I did the best I could. Like you said, I’m doing a little of everything this year, so it’s hard to really focus on one thing for very long. I practice something different almost every day because I race something different almost every weekend. There’s a reason that when you race supercross full time, you only ride supercross, ya know? To be at the top level you need weeks of preparation, and my schedule doesn’t really allow for that. Still, I felt pretty good. The skills don’t really go away, it just takes longer to find them when you don’t practice it a lot.

I felt ok. I was fast enough to make it further into the program but mistakes held me back. That’s one thing about Straight Rhythm: you can’t make any mistakes because there’s no time to catch up. It’s a really fun event though. Even though the results weren’t there, I’m glad I got to ride it again. Can’t wait 'til next year.