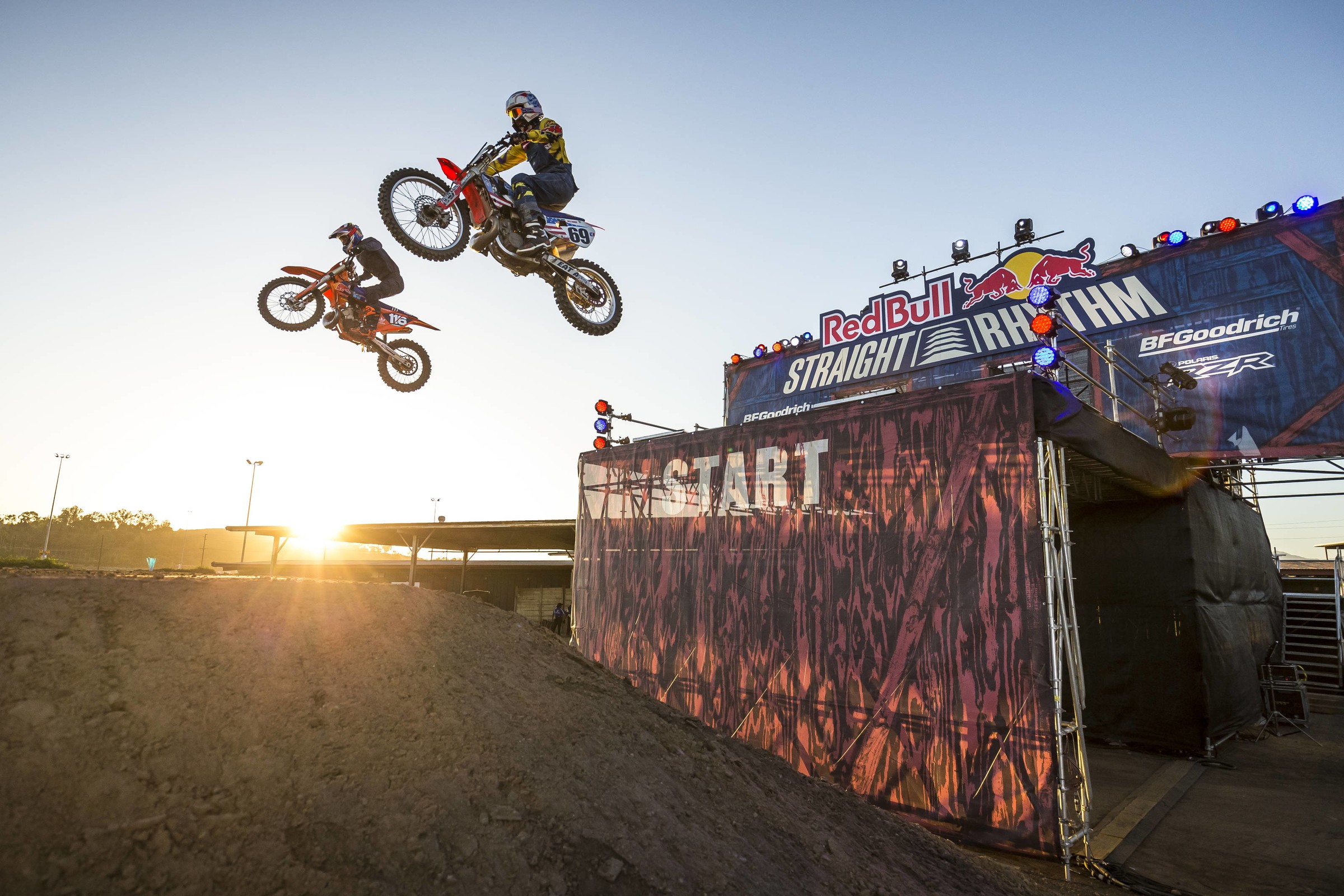 Ah, two-strokes! Who doesn’t love the sound of a crisp 125cc or 250cc sending it through the whoops?

Round 1 of the 250 class started in dramatic fashion with close racing, and even bike issues. Coming into this year's event, all eyes were focused on defending champ, Gared (Stank Dog) Steinke. Luck however would not be on his side as, Ryan Morais would knock off Stank Dog (who had a crash at the end) in the very first round. In addition the first round of racing saw, Christophe Pourcel suffer a mechanical issue, quintessential Ryan Dungey who just looked smooth and effortless, and Ryan Villopoto looks really good as well. Also, cheers to Josh Grant who is representing Racer X in tonight’s industry challenge. Round 1 results look like this:

Update: Ronnie Mac apparently missed practice--thinking he was a pre-seeded rider (ego much?)--so he was not allowed to compete in tonight's racing. Needless to say, "Uncle Ron" isn't happy. Drunk? yes. Happy? not so much.

What to say about Round 2? Ryan Dungey looks good and Ryan Villopoto is on it—while him and Josh Grant did take their match-up to the 3rd race, RV got the win by .01seconds. As these brackets wind down, the racing just gets closer and closer. Cameron McAdoo and Jordon Smith aslo put on a show, as did Shane McElrath and Ryan Morais. Coming up in the next round “The Ryans” will face-off once again. Here’s what the 2nd Round results look like:

Round 3 of the 250cc Class treated fans to a battle between “The Ryans,” once again. It’s been a few years since Villopoto and Dungey battled each other, but the racing was just as intense as it’s always been. Ryan Dungey has looked good all day, and he took the win against his long-time rival. Meanwhile teammates, Shane McElrath and Jordon Smith faced-off to see who would face Dungey in the final. McElrath and Smith both won a race a piece to force a third race, where Shane McElrath edged out his teammate to move on. Round 3 results look like this:

Smack talk has been a big part of the fun of this event, Jordon Smith didn’t hold back going after Ryan Villopoto on Instagram—obviously RV had a strong retort—so it’s only fitting that these two went head-to-head in the race for third. Each rider took a win, resulting in a third race. Race 1 saw RV take the win by inches, while Smith took the win in race 2. When the third race ended it was Ryan Villopoto who took the win and finishes 3rd overall in the 250 Class division.

Two men. Three runs. One champion. Shane McElrath is no stranger to winning at Red Bull Straight Rhythm and proved that once again as he faced off against Ryan Dungey in the 250cc class final. Race 1 was overly intense as the two were basically side-by-side for the entire race, with McElrath taking the win by .03 seconds. Dungey being Dungey though, he would use his smooth and effortless style to lock down the win in the second head-to-head battle. With one race left, and only one man leaving Pomona on top, Shane McElrath dug deep and put his Red Bull / Troy Lee Designs KTM on the top step of the podium.

Round 1 of the 150cc division provided much anticipated intensity as the “little bikes” labored a bit to get some of the rhythms dialed. A couple treats in this class came in the form of Luke Renzland’s Jeremy McGrath Team Peak inspired 125, and AJ Catanzaro’s James “Bubba” Stewart replica 259 KX 125. Fortunately for the fans, both MC's and Bubba’s bikes will move on to the next round (Catanzaro vs Surratt came down to a tie-braking 3rd race). Could we see a number 125 vs 259 match up? One can only hope! Round 1 results look like this:

Note: Gared "Stank Dog" Steinke did not compete due to his crash in the 250cc Class. Chance Fullerton took his place on the gate.

Two rounds of racing are in the books, and in the 150CC class fans got the match-up they were looking for as Jeremy..uh, Luke Renzland squared up against James..uh, AJ Catanzaro. The numbers 125 and 259 took eachother down to 3 races, as each won a race a piece. The real story in this round though is Catanzaro’s celebration dances—paying homage to “Bubba” we’ve seen some pretty impressive Stew dance moves. Round 2 results look like this:

As any final should, the 150cc division final came down to three races. AJ Catanzaro grabbed the first win, then Carson Brown came back in race number 2 to take the win. When the gate dropped in the third race Brown had a slight edge and was out front for a majority of this one, Catanzaro however channeled the 259 and throw down a charge and sent it through the whoops. Too little too late though, as Carson Brown crossed the stripe first to take the 150cc Class overall win.