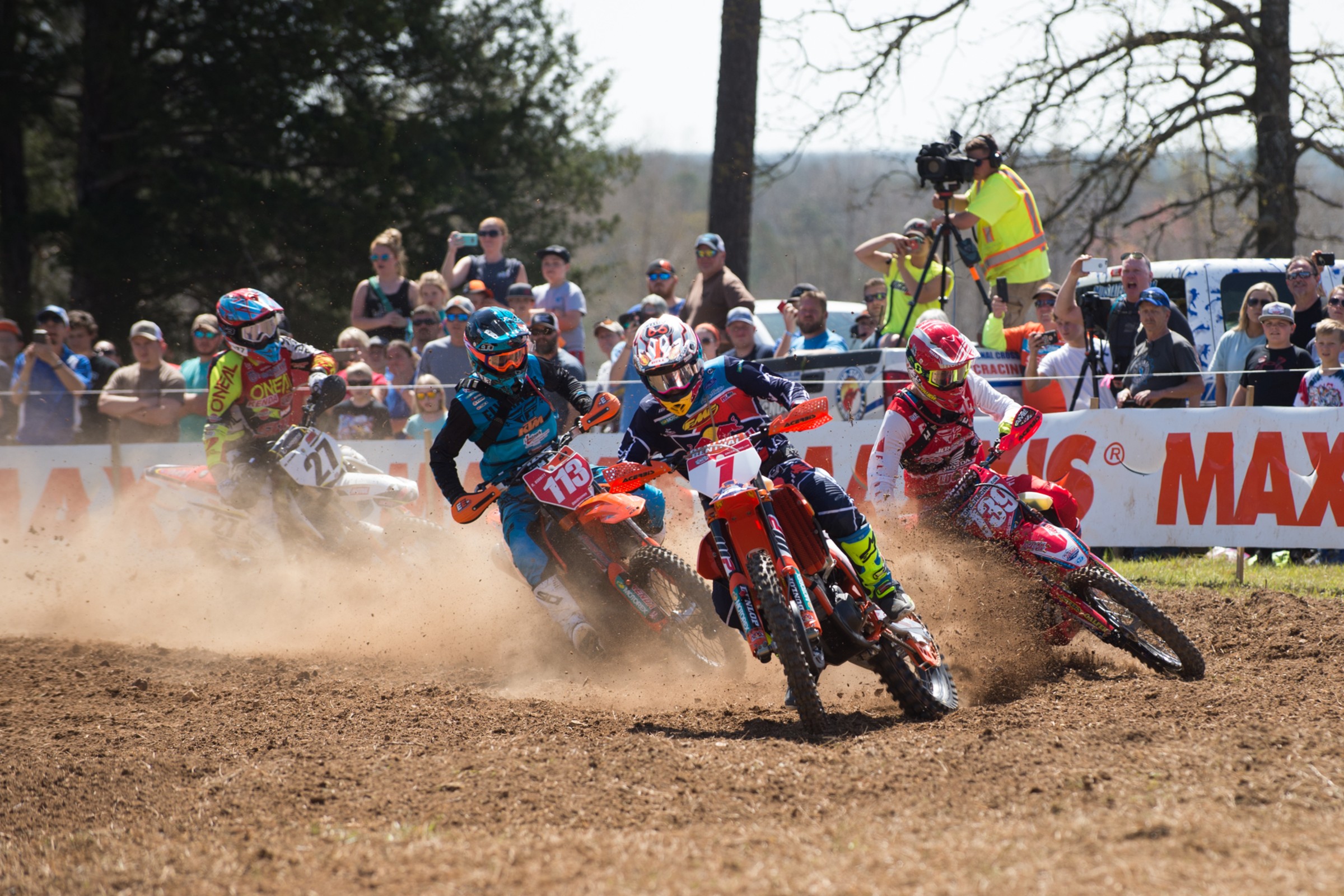 Open Mic The Champ Is Here

This past weekend in Ohio, FMF/KTM Factory Racing’s Kailub Russell got himself closer to GOAT status in off-road racing with his runner up ride. In the process, Russell clinched his sixth—yes, sixth—straight GNCC title. He’s one off tying Ed Lojack for first all-time and he’s already the all-time race winner in the off-road series that’s a true test of a rider’s skill and endurance. Kailub also has an AMA National Enduro Championship on his resume, too, and he’s the only rider to ever win both the GNCC and Enduro Championships in the same year.

This year, his season will stop early, though. Scheduled to race the final GNCC round and then the ISDE and some WORCS series races, Russell’s had to call time on that due to double shoulder surgery.

“I’ve actually got torn labrum in both my shoulders. I didn’t really realize it until a couple weeks ago,” he told us on the PulpMX Show earlier this week. “At the second-to-last race, two weeks ago before I wrapped up the championship this weekend, I had another crash and banged my right shoulder up.

“It’s basically going to affect ISDE this year. It’s been pretty on the down-low. I’ve known for like two and a half weeks now about my shoulder. There’s been no press release yet, but Antti [Kallonen], he’s my team manager at KTM and he’s the US team manager for the Six Days effort. There’s been no official press release out, but I’m for sure missing Six Days. I hate to break the news this way.”

“He’s [Baker] worked with [now-retired KTM off-road racer] Charlie Mullins and myself. Charlie went down there a few years before I did. I still don’t think he fully grasps the concept of what I do, but what he does for me really does apply to how I focus on GNCC. Overall, it makes me a better rider, just riding with his athletes that he trains,” Russell said. “But it’s tough because he still has never been to a GNCC himself, but he has a lot of respect for myself and what I do and the commitment that I put forth when I go down and get on his program. I definitely don’t think just his help alone would propel me to where I am, because I was kind of already on that trajectory, but it’s definitely helped the path, for sure.”

Although Russell won seven races this year (out of the 11) that were run, his main competitor, Rockstar Energy Husqvarna’s Thad Duvall, won the other four. It’s been a two-man series all year with Duvall 72 points ahead of third place in the series. So with me being a motocross guy, I mentioned to Kailub that it looked like the series was turning into something like Chad Reed and James Stewart had for a few years. If one guy didn’t win, the other probably was.

“It’s kind of that dynamic duo right now for sure,” Russell said. “I think I’m kind of like James in ’09 where Reed was right there, but never really could beat him straight-up unless for a mistake. It’s kind of the same dynamic, in a way, for sure. But he [Duvall] was definitely there keeping me on my toes. There’s no denying that. I still got that little bit of edge. I don’t know what it is. It’s just the fire that makes me who I am.”

Asked what motivated him year-to-year with six straight titles, Kailub was pretty honest in saying that in the odd time he loses a race, the fans that get on him and are happy he lost are part of the reason he’s able to stay driven.

“When I lose one race, it’s like their [other riders] whole fan base throws it in my face. ‘He’s not shit anymore.’ It’s f*****g one race. It’s almost like they bring it on themselves. You want a little bit of advantage. Don’t fire me up. You’re giving him more fire."

Want any proof of Russell’s speed? Watch the Unadilla National this past summer in the Lucas Oil Pro Motocross Championship where without a crash in the second moto, he might’ve finished on the podium in the 450 class [he spent a few laps in third]. Yes, it was a muddy mess but Russell’s speed in practice, when the track was much better, was impressive. The Unadilla performance provided some proof that Russell could be more than just a woods specialist.

We asked Russell this past Monday night on the PulpMX Show if he had aspirations of moving over to moto.

“I would love to give it a shot, but I’m not getting any younger by any means,” he said. “I’ve thrown the idea out there of finishing my contract and trying to get some support to do it. I’m getting older, but the drive is there, the will is there. I feel like I’m capable to be competitive, it’s just if somebody’s willing to give me a shot and help me make a living for my family. I would really love to give it a full-time shot in the near future, for sure. It’s one of my biggest career goals is to get a fair shot at it. Hopefully we can gear up to do that sometime.”

Any bets he won’t?