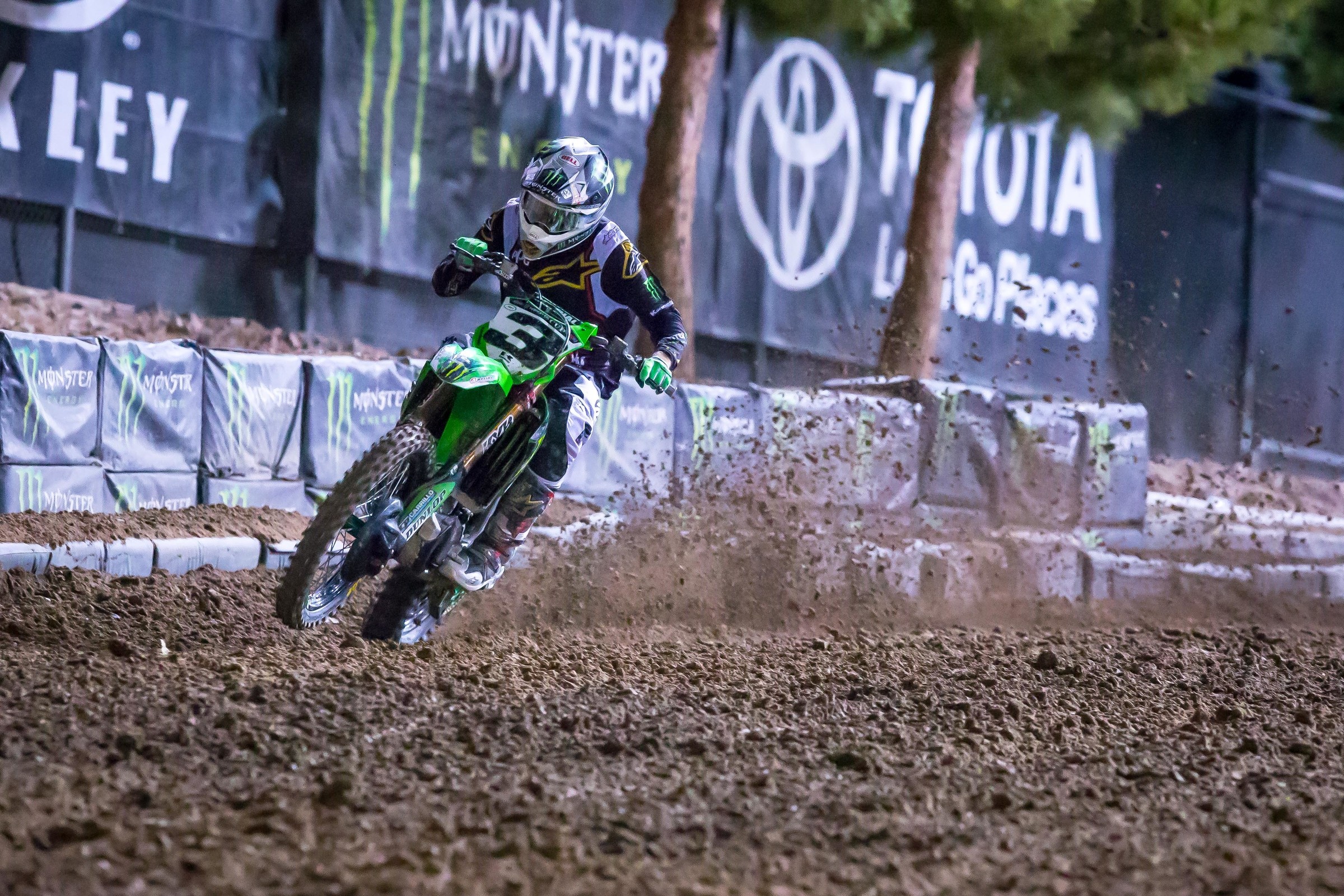 Eli Tomac won the Monster Million on Saturday night. If I were a non-moto reporter writing for the Las Vegas Sun, that might be the only message relayed. A non-moto person might not have even noticed the last lap teamwork that earned Tomac an extra 900k (pre-tax). That’s a sad fact and while I guess the overall storyline remains true, what really happened was so much more interesting.

Going into the final race, Eli Tomac knew what had to be done. He was clearly the man to beat and if he got a top three start, I think it would have been very uneventful (minus a Musquin holeshot). Right on dramatic cue, however, Tomac found himself in seventh position on the first lap. On the notoriously tough-to-pass Monster Energy Cup track, he would have only ten laps to get to the front. Even then, I felt Tomac would be able to make it happen if he made moves early while the pack was bunched up (pardon the pun).

I am not sure if he was nervous, overthinking it, or simply couldn’t find a way through, but he was unable to make moves in the first couple of laps. He finally got moving at the halfway point but was still in fourth. Even worse, Joey Savatgy was putting in a brilliant performance out front and had pulled a three second gap over the field. Tomac would not only have to find his way to second, but then close a sizable gap and then still find a way past Savatgy. It looked bleak on the surface but as Tomac worked past Reed to claim second spot, a new wrinkle unraveled. Would Savatgy go for the win in his first 450 race or would he see the overall picture and make things easy for his teammate?

Sitting here days after the race, it’s easy to make rational decisions given time to ponder pros and cons. In the middle of a ten-lap sprint under the bright lights of supercross, however, Savatgy had to have so many things running through his mind. Was he really going to give up a win in his first weekend with his new team? How would that affect his overall result? (It moved him from second to third overall as we now know.) How could he allow Tomac to win the million without coming to a stop on the final lap? How much is Tomac going to pay to actually do this?

All of those questions were going through his mind I’m guessing. In the end, the decision was fairly straight forward. For Monster Energy Kawasaki, having Tomac win the million is a huge coup and great marketing tool. That headline will blast to mainstream media and get traction because of the million-dollar prize. If Tomac only won the 100K (100K is a lot by the way so I am not trying to downplay that), the news would be shoved to page nine and most would never see nor care. Savatgy had to understand that importance for his new team and for his new teammate. Intentionally preventing Tomac from winning a million dollars (even though it’s racing) would probably not bode well for his relationship with the #1 rider on his team, either. Joey may be in a position next year where he needs good will to keep his contract and people remember moves like that. That #2 spot at Monster Energy Kawasaki is a very coveted position and Savatgy is not oblivious to one year contract nuances. I guess we also need to consider the possibility of a pre-race discussion if this very scenario arose. I would assume that it was a very short convo that went something like “if Tomac is behind you for the win, don’t screw it up.” Having Tomac win that million was a huge deal for Tomac, the team, Feld Entertainment’s media reach, and with the subtle slide to the outside line, possibly Joey Savatgy’s longevity at that team.

As for “how” to execute this move, Savatgy made the right decision as to where and when. As they entered the outside-the-stadium section of the course, Savatgy still held a decent lead (see: too much to overcome without help). Savatgy also knew that the outside section is not in direct viewing for the spectators and tougher for televisions to capture as well. It was the perfect area to slide to the outside and give Tomac the line. He executed it perfectly and Tomac never hesitated. The only changes I would have suggested would to not make a hand gesture, just simply move over a la Musquin at East Rutherford 2017. The hand gesture is a sure sign of intent and removes any “I made a mistake” stories (even though that Musquin move was laughable). Also, if I really wanted to critique it, Savatgy could have slowed a bit more during the beginning of the lap to allow Tomac to be closer and then the move to the outside line looks less dramatic. It’s easy to pick it apart in hindsight and in the moment, things are happening very quickly. Overall, I think Savatgy nailed it.

The aftermath adds a few wrinkles, too. Tomac has been outspoken about the Red Bull KTM teamwork in the 2017 title chase. From my perspective and Tomac’s too, Musquin clearly helped Dungey in that last lap position change (East Rutherford 2017). Now with this move, does that change the narrative? I personally don’t think it does because Savatgy’s move changed nothing big picture. Sure, Tomac got more money and Savatgy lost an overall position but this race has no real impact on the season. The championship is a much different animal and Musquin’s move could have changed everything going into that 2017 Las Vegas finale. What’s done is done and Tomac’s opinion probably won’t change, but it was interesting to see the other side of the coin deal with that dynamic.

Another subtle effect of the win could be on Tomac’s psyche. That Motocross of Nations debacle could have taken a toll on Tomac’s confidence going into a long off-season. That bad taste could have lingered, souring the mood for weeks or months. The off-season is long and difficult. Day after day of monotonous training with nothing but your thoughts to either haunt you or soothe you. Losing in the manner of which they did would not have been a fun last race to flash back to. Instead, he now has a clean sweep win where he clearly dominated to reflect on. That’s a huge swing in esteem for both Tomac and his team. It also likely created a bond and trust between Tomac and new teammate Savatgy. The mood will be light and fun for the next two months now and I just don’t know if that would be the case otherwise. For Monster Energy Kawasaki, last weekend was the best possible scenario. Their team leader got his mojo back, their new #2 guy came out swinging and endeared himself to their sponsors at large, and they captured every relevant headline worldwide.