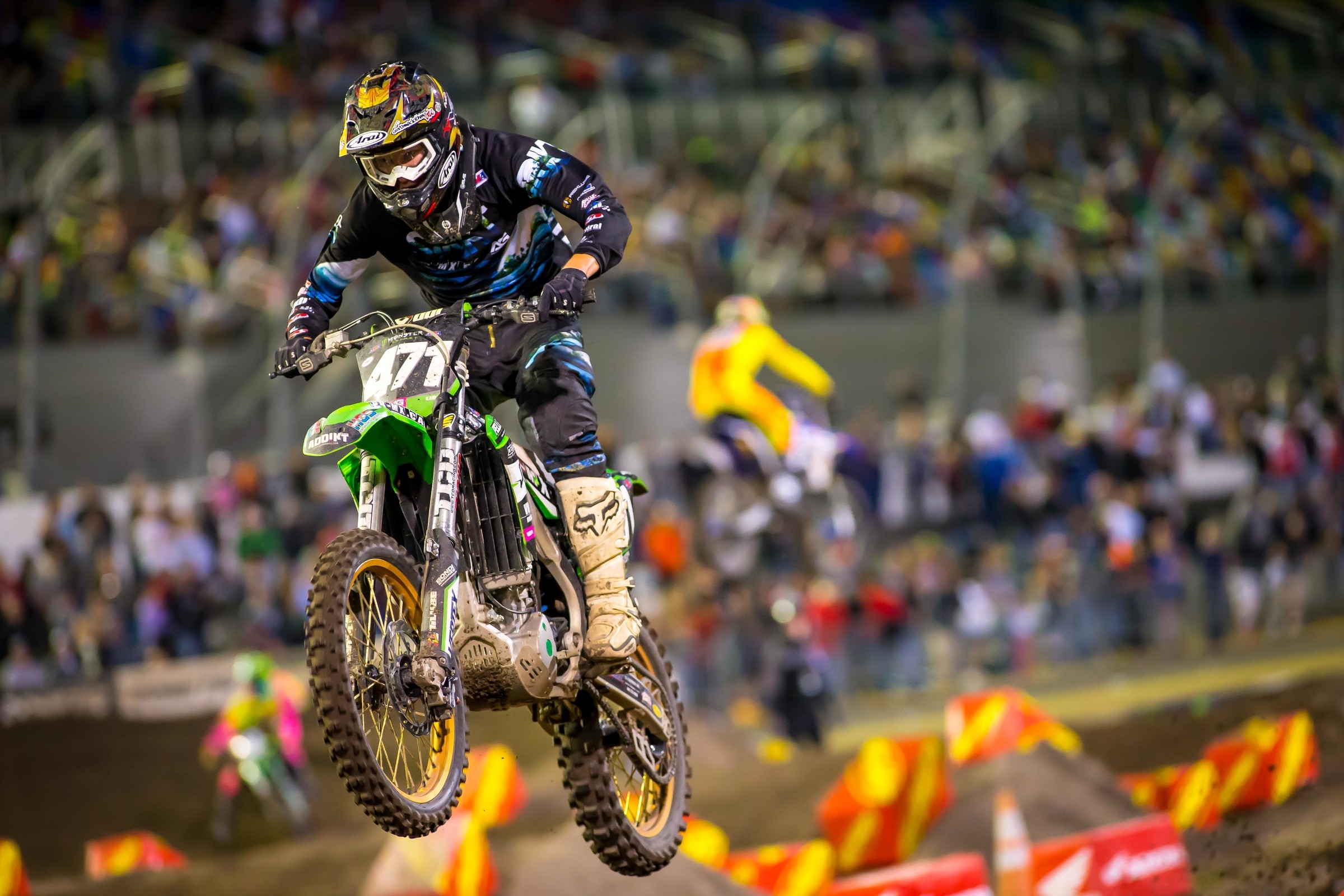 This past weekend in Montreal, Canada, Monster Energy Supercross privateer Logan Karnow put himself on the podium in the 250 class, finishing second. However, success north of the border isn’t exactly new to the rider out of Ohio. Logan actually spends quite a bit of time racing in Canadian arenacross- and supercross-type races—and he has become quite good at it. We caught up with Karnow to chat about this past weekend’s race and what he’s been up to this summer. Enjoy!

Racer X: You just had a pretty stellar weekend in Montreal. Why don’t you tell us a little bit about it?
Logan Karnow: It was a really good weekend. I came up and kind of had high expectations because I have a big supercross background and not a lot of Canadians do, except for [Jess] Pettis. It went good. I came out and qualified. First qualifier I qualified second, and then the last one I qualified third. I was riding good. I rode good all day. Came off for the main event and got a second-place start behind Pettis and kind of just rode around and maintained a gap behind me and put her in for second. It was awesome.

What was the track like up there? Was it like a standard supercross track, or was it a little bit basic?
I was kind of expecting it to be a little bit more mellow, but it wasn’t. It was pretty much a full-blown SX track. It was really cool. It was just maybe five, ten seconds a lap slower than a full SX track, but it was legit. It had good rhythms, a triple-triple-triple, a triple onto a table, everything like a real a supercross track. It had big whoops, huge whoops. That worked to my advantage.

What was the dirt like? Was it kind of soft?
It seemed like it was going to be really soft, kind of like at Indianapolis, but it actually held up really good. The dirt was good all night. It didn’t really get too beat down. It was solid.

The trip in general, did you go up there by yourself or with a team?
I actually ride for the Team PR-MX Kawasaki team. They’re actually based out of Montreal, so I’m always up in Quebec racing. I just got done doing an arenacross series up here. I’ve done the Triple Crown stuff in the past. I kind of just had a connection to come up here and race the 250 class, and I’m stoked I did it.

I was kind of wondering how that deal came about. Is that like an invite thing, or was it open to any pro? How did you get to race the Montreal Supercross?
It was invite-only. I knew Kyle Thompson from racing their series in the past. It kind of helped that I was riding for a team based out of Montreal, so that definitely played into it.

How was the crowd? Was it full like a regular supercross here?
It was kind of weird. They kind of only used half of the stadium for seating and the track. It was pretty full. I think it was full enough for them to do it again next year. I think it went good.

Speaking of money and design, I saw on your Instagram you wore some gear that kind of looked like money. Maybe some Illuminati stuff. What’s the story behind that?
Yeah, I run Strikt gear, probably one of the coolest companies ever. I’m super tight with the owner and he’s an awesome dude. He just likes to make gear that’s just a bit different than every other company. I’m the same way. I love it. We get along really good.

I’m assuming 2019 plans are to race here in the United States again. What are you looking forward to when A1 comes around? What are your goals for next year?
Hopefully I do a lot better than this year. I kind of had a rough year. I had a really, really bad injury last year that kind of set me out for the entire year. So, this year is kind of a building year. I made a main event. I got 15th at Daytona, so that was cool. I had zero confidence this year. I didn’t realize how important confidence was until I actually have it. Now I have it and I feel like I belong there, and my results have improved so much. It’s ridiculous. I’m going to keep doing that. I’m going to race supercross hopefully the whole series. West Coast maybe on a 450, 250 East. We’ll see what’s going on after that.

If you could give one piece of advice to a younger privateer coming up who maybe doesn’t have the factory support but still wants to go the privateer route, what’s the biggest piece of advice you would give that person?
Devote your whole life to racing. Do everything right. Be perfect. Do everything you’re supposed to do in the gym. Go above and beyond and don’t settle.

What kind of things do you do for fun whenever you’re not racing?
I have a big BMX background. I used to work at one of the biggest BMX parks in the States, in Cleveland, so I love doing that. I love road biking. I road bike all the time. Running. I like to go out with my family and have a good time, have a few drinks. Just hang out with some buddies. Just keep it fun.

Who’s your crew while you’re up there?
The PR-MX crew is a huge family up here. There’s probably a group of 20 to 30 of us that are all just super cool dudes and will do anything for anybody. It’s pretty cool. There’s a good group of people up here to hang out with.

Sounds like you got a pretty good deal going. You want to thank your sponsors?
First off, I can’t thank Julien with Team PR-MX enough. He’s done so much for me throughout the past three years now. I can’t thank him enough. I wouldn’t be where I am without him. Strikt gear, ODI grips, Addiction Industries, Airtime Clothing, EKS Brand goggles, Arai helmets, Atlas neck brace, and just everybody else who supports the team. We couldn’t do it without you.

Sign up for our newsletter and never miss a new product release or sale.