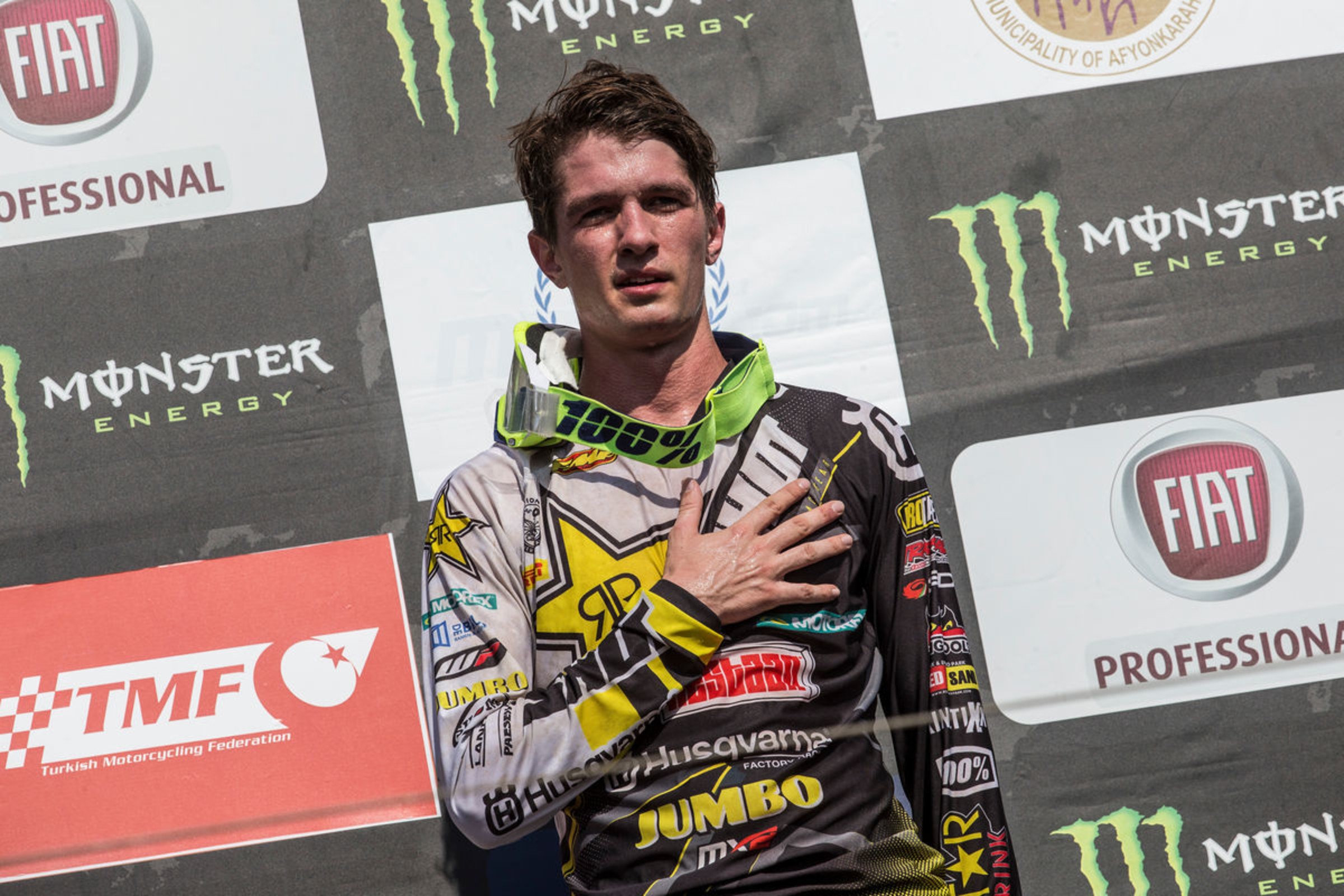 GP Report 3 Things We Learned at the MXGP of Turkey

MXGP’s last far-flung fixture of the 2018 campaign took the series to Turkey for the first time since 2009, when a certain Zach Osborne claimed his first and sole overall Grand Prix win at the short-lived Istanbul circuit. The Afyon facility was everything that modern MXGP aspires toward: wide, flowing, jumpy, easy viewing, surrounded by amenities, and with a spectacular layout for TV. The new build was hard-packed, full-gas, and fast, leading to some bustling action and close calls with emphasis on corner speed.

At last, Rockstar Energy Husqvarna’s Thomas Covington was able to grasp the farewell MX2 victory he’d long been chasing in the second half of the campaign since recovering from a knee problem that dented his title chances. Covington’s default Sunday expression had veered between a smile and a grimace lately with no less than four runner-up positions in six rounds. He hovered near, but so far from matching the kind of consistency that Red Bull KTM’s Jorge Prado had stitched together and the 22-year-old’s first success of 2018 was still no clear-cut affair. Covington profited from a bizarre collision between the Red Bull KTM protagonists (more on that later) to clinch the first moto and still managed to get the job done in the second, despite a late crash that handed the checkered flag to world champ Pauls Jonass. Covington’s third place meant the second successive U.S. winner in the MX2 class in Turkey.

“I saw the opportunity and tried to hang onto it,” he said. “I really wanted the 1-1, but I pushed too much on that roller. Luckily, I popped back up pretty quick.”

MX2 was an engaging competition with passes and tapped-out 250s attacking the Afyon course. Riders such as Honda 114 Motorsports’s Hunter Lawrence, HRC’s Calvin Vlaanderen, Kemea Yamaha’s Ben Watson (fourth yet again), and Covington’s teammate Thomas Kjer Olsen all put on a show and left the final podium positions up in the air until the final minutes.

“It was good that he crashed!” Olsen joked on Covington’s tip-off from first to third, an incident that allowed him to bump Lawrence away from what would have been his third rostrum finish in a row. “But it’s not like I smiling about that! He deserved a 1-1.

“It’s really good to be up here with my teammate; it’s the third time, actually,” the Dane added. “At the moment, I am having a lot of fun on the bike and we have figured out a few things to help me with my riding.”

The track had its part to play. Devilishly fast and inviting on Saturday—so much so that Monster Energy Yamaha’s Romain Febvre suffered a heavy crash, and a suspected concussion places his role as part of the French MXoN team into doubt—the new track churned into something rougher and more demanding on Sunday. “The track became more technical and went in a good way,” Monster Energy Kawasaki’s Clement Desalle, who posted a third podium position on the bounce in MXGP, said.

“I was really surprised with how it developed during the weekend,” Red Bull KTM’s Jeffrey Herlings said. “There were only two classes racing [no European support categories], and regarding the watering for us, I would say it was prime and perfect. A good job by the organization, and I really like the track.”

Covington, as one of the MX2 runners and thus first on the terrain in both the morning and after the interval, probably suffered more with the watering required to temper the soil in temperatures that easily topped 30 degrees Celsius (85 degrees Fahrenheit). “With the way the track was prepped, it always came down to one line, and if you came off that line, it was super muddy or you lost a lot of time,” he lamented before adding, “I enjoyed the whole weekend here; nice hotels and good food for us. In a lot of places we go, that is a bit of a struggle. It would be nice to see some more fans here in coming years, but all in all, it was a nice weekend.”

Afyon did not have the same pull on the public as Istanbul nine years previously (Osborne triumphed in front of a packed and curious site full of people), and the numbers of riders in the gates reflected the distance and end-of-season vibe pervading round 18 of 20, but the Grand Prix was well-supported, well-liked, and bound to get stronger for the coming years.

2. The bang and the blame

Jorge Prado missed the MX2 podium for only the third time in 2018, and Pauls Jonass’ 6-1 allowed the Latvian to grab a runner-up classification and shrink the championship points gap to 24 between the pair with two Grands Prix and four motos to run—100 points still to swipe. Although an orange bike did not win in Turkey (just the third time that's happened in 2018), Red Bull KTM have now mathematically confirmed a 1-2 in the standings; they just need to sort the order of the riders.

Unlike the duel in MXGP that has remained respectful but distant between Herlings and Antonio Cairoli, the MX2 battle has been run with more warmth and more of a relationship between Jonass and Prado—one a defending champion and bound for MXGP in 2019, another an MX2-second-year, fun-loving but steely 17-year-old excelling under the De Carli/Cairoli wing. Afyon provided Jonass and Prado with their “Matterley Basin Moment,” where Herlings and Cairoli clashed lines and the Sicilian hit the English soil as the MXGP clash started to simmer.

It came on the ninth lap of the first moto and in a tussle for the lead. Prado ambitiously leapt over a roller where Jonass, in front, was narrowing the line, and the duo collided in midair, with Jonass crashing and Prado running off track. “I didn't see it coming, and I was lucky just to have stretched knee ligaments; it could have been way worse because it was a really fast crash. That's racing… but it was really dangerous,” Jonass said. Prado barely mentioned the incident in public, and there was a hint of “who to blame?” about the tangle, but the Spaniard was largely off-song in Turkey and toiled to seventh in the second moto. “I just didn't find the good flow and struggled a lot,” he admitted. “A small mistake and [just] one moto from many [good ones] this year that went bad.”

The tension level crept up a notch under the orange awning, but was partly dissipated by Jonass’ positive second moto and some just desserts for his speed and form in the weekend that began with pole position on Saturday. “I was not sure how my knee was going to be until I raced the second moto, but like I said on Saturday, it is not over until it’s over. We have nothing to lose. I am already second in the championship, so things can only get better, not worse.

“We’ll see after the season if I’ll send him [Prado] a Christmas card!” he joked.

Is Prado feeling the pressure? He’s handled the weight of the red plate without qualm to date. Imola and the MX2 curtain-closer will be the second new track for the series in the final three rounds, but Assen, up first in a fortnight, is familiar to both, with the circuit hosting the Dutch GP for the fourth year in a row. The shallow sand was the scene of the Spaniard’s debut GP and podium finish in 2016 and a victory 12 months ago. Jonass was in title mode in 2017 and will still remember a costly crash in 2015 while aiming to snare the MX2 crown in the wake of Herlings’ injury misery and a late rally against Tim Gajser. This one will likely go down to the last gate drop, but Assen will be a vital chapter in the overall seven-month tussle.

3. A matter of hours and minutes

Jeffrey Herlings has almost unbuckled one boot. His “monk”-like existence this year paid-off with a 15th Grand Prix win from 18 (17 that he’s contested, and he was runner-up in the other two races) and a 13th 1-1, meaning a 95-point advantage. If a battered Cairoli wins the first moto in Assen, then Herlings only needs to finish 15th in front of his home crowd and in the sand to capture his fourth world title and first in the premier class at his second attempt. He’ll be just the fourth rider to rule both MX2 and MXGP this century.

“It was a good weekend…even if my riding was not the greatest, as I was feeling sick,” he admitted and after an interesting second moto, where HRC’s Tim Gajser (finishing as runner-up for the second weekend in a row) applied some late-race pressure with an unsuccessful outcome. “We did a great job for the championship. Until now, we can look back on a great season.”

The champion-elect now enters the weirdest and (perhaps) longest two weeks of his life. The clock will tick down to a weekend at Assen, where the spotlight will burn its brightest and where heightened fan, follower, and media interest will see the usually elusive Herlings seek even more hideaways between the race truck and Red Bull hospitality rig. He may describe the scenario of being crowned on home soil as a “dream,” but there is little doubt that this will be the biggest scrutiny he will have faced personally and professionally. The “dead time” he faces now in the run-up is even a little bewildering: Keep the same maniacal training regime or taper off? Herlings has been bitten before. If he hadn’t have broken a collarbone for the fourth time while training prior to round 11, then he would have already wrapped the contest.

“I think the next few weeks will be quite stressful, but we are so close and have worked so hard for this,” he commented. “I don't want to mess it up. The next two weeks will be tough. I won’t go out of the house! I want to ride, but don't want an injury… but I think not riding for two weeks is a bit extreme as well. We’ll sit together with the team to work out what to do to minimize the risk, but what is meant to be will be. I’ll leave it up to the man above to work that out, but normally if you win 15 out of 18 races, you deserve to win the championship.”

On paper, Herlings has made MXGP look easy. Although he is unrevealing and almost secretive about how he trains and prepares for Grands Prix, Herlings has hinted at the sacrifices he’d had to make this year and is quick to also remind people of the standards he’s been forced to set. In Turkey, he still had to deal with Cairoli in the first moto, who is limping into the final throes of the battle. The defending champion twisted his left knee on Saturday and smashed his right hand on the Monster Energy bridge support cord in the first moto. A run-in (again, echoing Bulgaria the previous weekend) with a tumbling Max Anstie early in the second moto meant Cairoli had to restart last, and he made it back to 15th to ensure Herlings’ Assen date.

“We’ll try to make it happen, but the competition next to me has been so strong, especially Tony all season,” Herlings said. “It has been a crazy year and very intense. It is impressive how fast the guys, are I think a lot of people at the Nations will be shocked. The level is very high at the moment.”