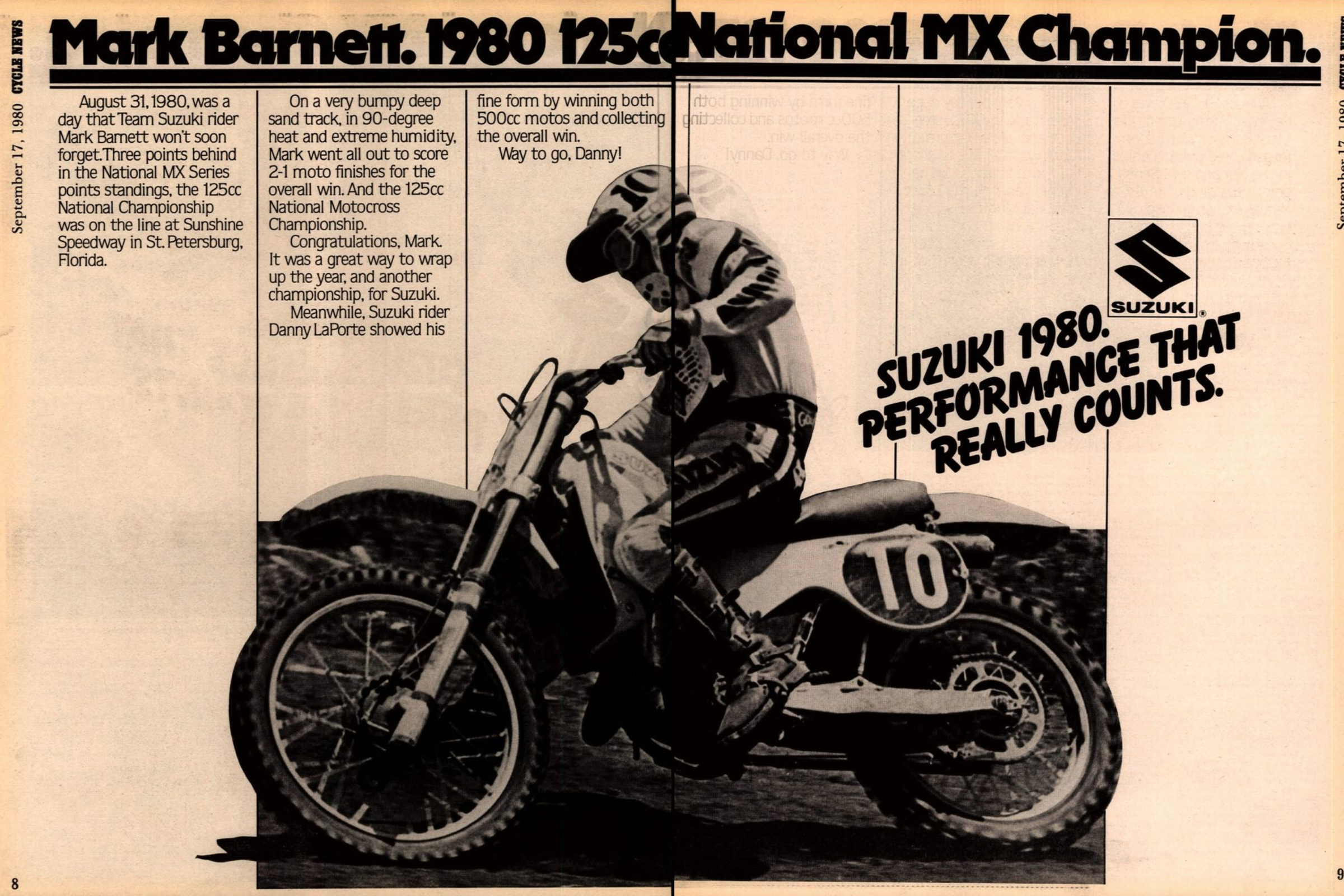 On This Day in Moto August 31

The AMA Pro Motocross Championship ended at Sunshine Speedway in St. Petersburg, Florida. The 125 Class was won by Suzuki's Mark Barnett, and the victory was enough for the first AMA 125 National Championship for both Barnett and Suzuki. The Bomber bettered Yamaha's Broc Glover, the previous champion in each of the previous three years. Glover had engine trouble the week before in New York, and at St. Pete, his shock went away in the second moto and he could only muster a sixth-place finish.

In the 500 Class, Suzuki's Danny LaPorte captured what would turn out to be his last AMA win, but his 500cc title had already been clinched by Honda's Chuck Sun. He would would miss St. Pete after breaking his hand at Broome-Tioga on the day he clinched the title.

At a rather anticlimactic final round of the 125/250 AMA National Championship at Steel City, Yamaha's Kevin Windham topped the 125 Class and Jeff Emig was the 1-1 winner in the 250 Class. Kawasaki's Emig had already clinched the 250 title, his second in a row, on the Jeremy Albrecht-tuned KX250. He was followed at Steel City by Suzuki's Greg Albertyn and Honda of Troy's Michael Craig. Windham was not the 125 champion—third-place Ricky Carmichael had already wrapped the title up in his rookie year—but he beat him straight-up at Steel City. Former two-time champion Steve Lamson of Team Honda finished second overall in his last ride with the #1 plate after two years.

In what was supposed to be the next-to-last round of the 2003 AMA/Chevy Trucks National Motocross Championship, Kawasaki's James Stewart topped Red Bull KTM rider Ryan Hughes, Yamaha of Troy's Craig Anderson, and Hughes' KTM teammate Grant Langston, the series points leader. But while the race was happening, the river had risen once again over above Dayton, Ohio, and flooded the Kenworthy's track that was set to run the following weekend. The race was originally supposed to run in July, but it was postponed due to flooding. Now, in the days ahead, the AMA would have to make the difficult decision to call off the last round and seal the standings as they were after Steel City: Grant Langston (380), Ryan Hughes (373). Langston was crowned the 2003 AMA 125cc National Motocross Champion.

The winner of Steel City was James Stewart. He won all seven rounds and 14 motos he rode in 2003, but he missed the first four rounds with a broken collarbone.

In the 250 Class, Ricky Carmichael won his ninth of 11 rounds. He had already clinched the title, his fourth in a row in the class and seventh since he started racing.

James Stewart completed his masterpiece in the 450 Class, winning both motos at Steel City, the final round of the 2008 AMA Pro Motocross Championship. He gave a perfect 24-0 in all motos and only the third perfect season in AMA Motocross history. His Kawasaki teammate Tim Ferry finished second overall, and Yamaha's Broc Hepler was third.