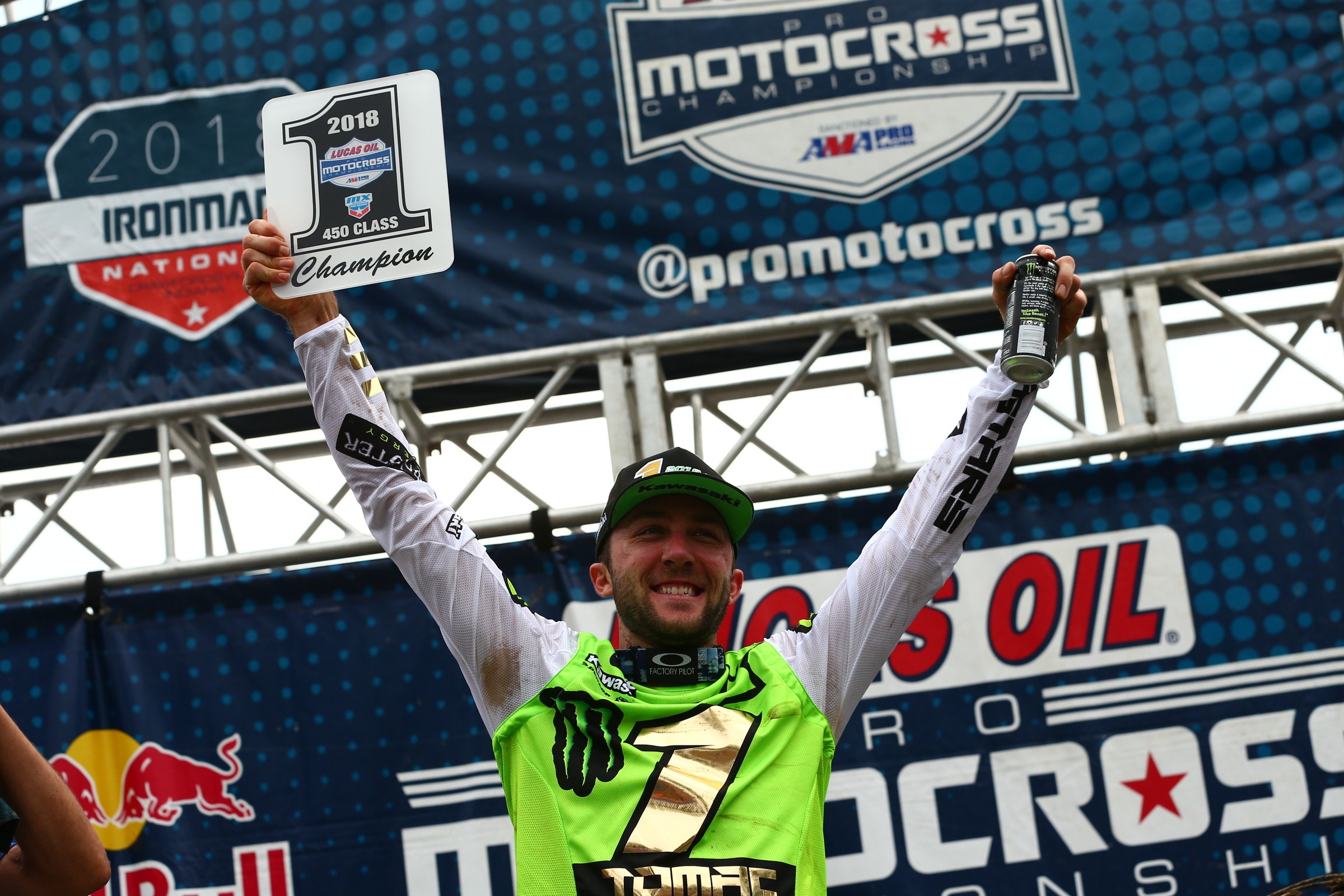 It probably shouldn’t have come down to the final moto of the year. Eli Tomac dominated the 450 Class this year. He won 15 motos (of 24), 8 overalls (of 12), led 138 laps (most in the class), and had an average qualifying position of 1.5 (best in the class). Yet, as we entered the final round of Lucas Oil Pro Motocross, there was a chance—a slight chance, but still a chance—Tomac would not clinch a second title.

If not for one race, it wouldn’t have gotten this far. Tomac reeled off nine wins in 11 motos to begin the year and held a 32-point lead entering RedBud. Then he saw 22-points go up in smoke as he suffered a mechanical while leading. He finished ninth in the following moto and left in a three-point hole. But he fought back. He won six of eight motos and didn’t finish outside the top three until the second moto this afternoon at Ironman, when he just need to walk it home to clinch a second straight title.

“My goal was to attack the first one and do everything I need to clinch, and I missed it,” said Tomac, who finished second in the first moto and missed clinching the title by one point. “That was my mindset coming in and it worked out. I rode really well in that first moto even with that little tip over. In the second one I kind of had to mail it in, but that’s how it goes.”

Today wouldn’t be easy for Tomac either. Rain pounded the Ironman circuit all morning and made for a sloppy track. Not ideal conditions if you’re looking to clinch a title. Tomac said post-race the conditions were certainly in his thought process.

“It did, I’ll be straight up with it,” Tomac said after the race regarding the weather. “I thought to myself, ‘we’re getting put to the test again. To the max.’ We were a lot better in the mud this year than last and that gave me the confidence. The way we rode Unadilla, I was pretty confident we wouldn’t have issues today.”

“Anytime you can be in the same sentence as that guy, it’s pretty cool,” Tomac said when asked how it felt to be the first since Carmichael to go back-to-back.

Unfortunately for Justin Barcia, he decided to take his first win since 2015 on a day that a champion was crowned. And while the headlines will certainly revolve around Tomac and his title, let’s leave some room for Barcia.

Nearly a year ago to this date, Barcia was starting his off-season as a full privateer. He bought a bike from Morgantown Powersports in Morgantown, W.V., a stones throw from Racer X HQ. After racing the Monster Energy Cup on his own, Barcia would eventually land a fill-in ride with Monster Energy Yamaha in place of the injured Davi Millsaps. The deal was eventually extended to the end of the year and Barcia returned to podium form. This week, Yamaha announced a multi-year extension with Barcia that will see him on the team in 2019 and beyond. And he’s back on Team USA, representing the red, white and blue again this year at the Motocross of Nations.

“Pretty crazy to think where I started the beginning of the year,” Barcia said. “It was difficult times for sure. I’ve really had to revamp my career, pretty much.”

“I knew I could win. The whole year I’ve just been wanting to get a moto win to get me back on track,” Barcia said post-race. “I got the opportunity at Yamaha and took advantage of it. They are a great team.”

While we’re saving headline space, let’s leave room for Ken Roczen. Consecutive arm injuries in 2017 and 2018 nearly cost the two-time 450 Pro Motocross Champion his career. Roczen fought back both times, doing the hard work to get back to form. He started the year slow, but eventually things turned around. He was a consistent podium performer and even captured two moto wins. For a rider that wasn’t sure if he’d race the opener to third in points at the end of the year is certainly a turn around.

“Honestly, a week or two before Hangtown I didn’t even know if I was going to race the first round because I was having problems with my hand, but it’s the best practice you can get,” Roczen said post-race. “It just seems like halfway through, it seemed like we really started picking it up. Just finishing it off here today with third in the championship—that was the goal coming in to today. It’s just good to finish this outdoor season healthy and fairly strong.”

And what a year for Marvin Musquin. Yes, he came up short of the title again, but the Frenchman pushed Tomac the entire season. He won six motos (second most in the class) and held the points lead after RedBud. Although he had a slim chance at the title today, he knew it was a long shot.

“It was kind of close, but definitely a lot of points down coming into Ironman,” Musquin said post-race. “It’s been a good season. The goal was to be consistent and be on the podium more than last year and that’s what I did, but the competition was very tough.”

There wasn’t much on the line today for the 250 Class. Well, other than pride and money. For Aaron Plessinger today would serve as his final race in the 250 Class in Lucas Oil Pro Motocross. The 2018 250SX and MX champion is moving up to the 450 Class after the Motocross of Nations. And what a way—and place—to end his 250 career in the series. Plessinger cut his teeth in GNCC and lives not far from the Ironman track, which also hosts a GNCC round. He took his first career win here in 2015 and will end his 250 career here with a win as well following his 1-1 performance today.

“This was like one of the GNCC’s I’ve race here,” Plessinger said post-race. “When it keeps raining like in practice, it’s not bad. But once the rain stopped and it started getting tacked up and started sticking to my bike—I think at the end of the first moto my bike was about 100 pound heavier than when I started.”

And what a way to end the year for GEICO Honda teammates RJ Hampshire and Chase Sexton. Hampshire captured his first career overall last weekend and Sexton took second—a career-high. The duo were great again today—well, aside from a few crashes, but everyone crashed today—with Hampshire taking second overall via 4-3 motos and Sexton finishing third overall via 2-6 motos.

“I’ve actually raced a GNCC here, twice,” Sexton said post-race. “I wished it would have helped me out there today. Falling six times in the second moto is not GNCC-worthy.”

“We’ve both been fast, but couldn’t really put it together,” Hampshire said. “Double podiums for GEICO Honda two weekends in a row is huge, especially the way we started out and then losing Jeremy [Martin].”