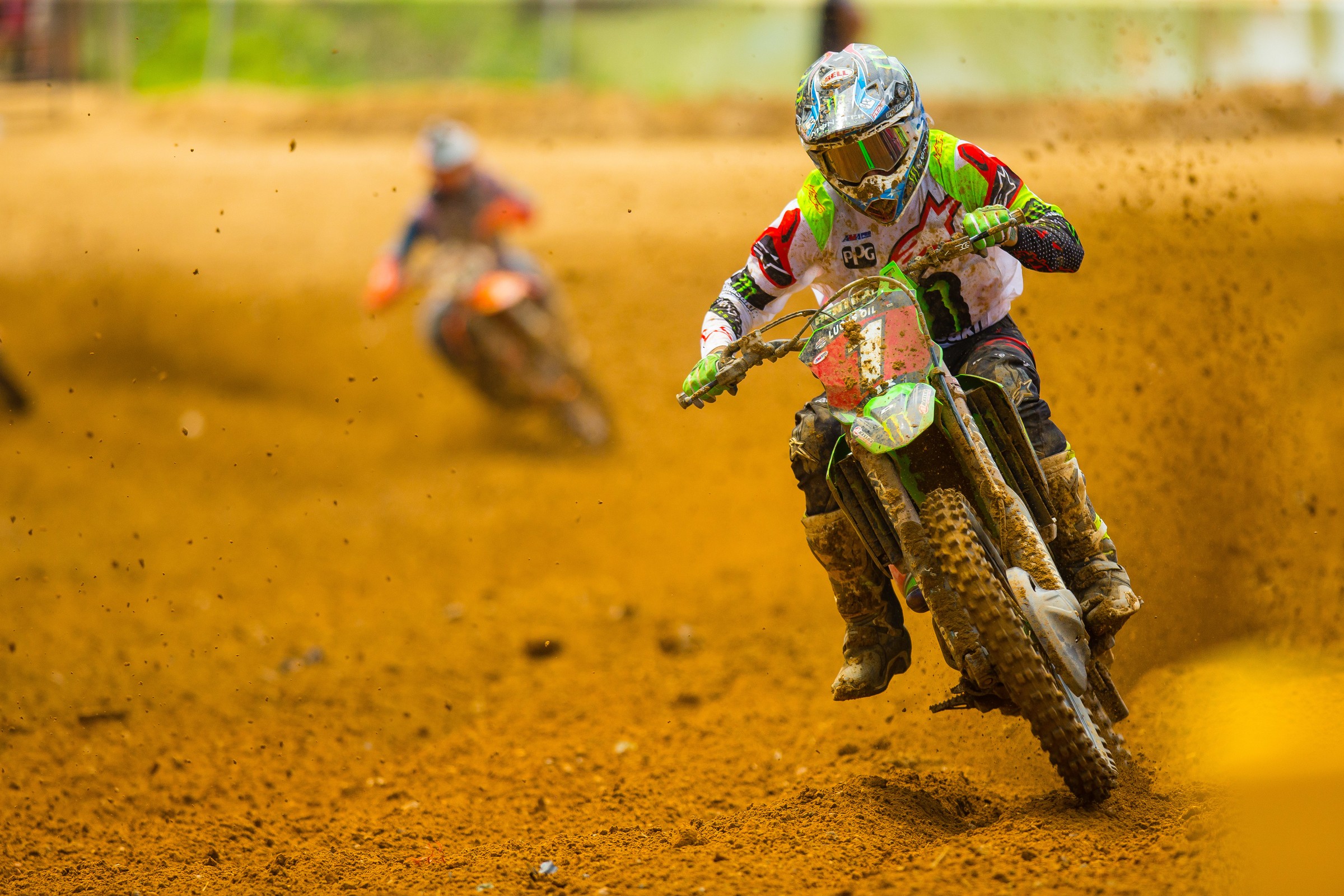 Things are looking pretty good for Eli Tomac, who has a 20-point lead over Marvin Musquin with just two motos remaining in the 2018 season of Lucas Oil Pro Motocross. In fact, just about the only question now is if he’ll clinch the title in the first or second moto. If he wins the first moto and Musquin finishes third or worse, the championship is his. Either way, look for Tomac to get it done this Saturday at Ironman. —Aaron Hansel

RJ Hampshire checked off a big box on his list of career accomplishments when he went 2-1 at Budds Creek to take the first overall win of his career. It isn’t the first time Hampshire has shown good speed this year, either, although a glance at his results on paper doesn’t accurately reflect just how fast he’s been at times this season. Now that he’s got that first win out of the way, you know he’ll be looking to stack another one this weekend. —Hansel

If you’ve been keeping an eye on the points situation underneath Tomac and Musquin, you know Ken Roczen and Justin Barcia have been going at it for third place. Barcia held the spot after Spring Creek, they were tied after Washougal, Barcia got it back after Unadilla, and now, following Budds Creek, Roczen holds the position by nine points over Barcia. Who will wind up with third in the standings when the roost settles at the finale? —Hansel

You can’t get any closer to winning the overall than Roczen did at Budds Creek. He and Tomac literally tied for the win, with Tomac getting the nod on account of his superior second-moto performance. If it wasn’t for Roczen running “out of gas there towards the end,” the top of the podium would have been red, not green. We’ll see if the two-time national champion can close out 2018 by nabbing that elusive win. —Hansel

After winning the first moto to clinch the 250 National Championship, Aaron Plessinger wasn’t able to bring that same speed to moto two. That’s understandable, too, considering everything that must have been going on in his head after wrapping up the title. In the television broadcast, 2017 National Champ Zach Osborne likened it to pulling an emotional drain plug. Now that Plessinger has had a week to process everything, will he get back up front in both motos this weekend? —Hansel

When Chad Reed lines up in the 450 Class on Saturday, it will have been 1,169 days between Lucas Oil Pro Motocross starts for the 2009 450 champion. Since shutting down his TwoTwo Motorsports team after High Point in 2015, Reed has been on a supercross-only deal (although he did race a few MXGPs in the last three years). Reed said he wasn’t planning on being in “race shape” for another six weeks, but that it was a great opportunity with Autotrader/Yoshimura Suzuki and a chance to do what he loves: race. “I haven’t raced a national in three years, but I have those nervous and excited race feelings to be getting back out there. I’m stoked to help their team and sponsors while a few of their riders are out with injuries. I feel like a kid again getting to ride a factory bike and go racing with a highly motivated crew.” How do you think Reed will do in his return? —Chase Stallo

If you’re looking for a ride, the easiest thing a rider can do for themselves is put in results that make it hard for any team to pass on you. That’s what Mitchell Harrison is doing down the stretch. His deal with Rockstar Energy Husqvarna is up at the end of the year, so these last few races have been crucial. Harrison has delivered solid results both in the mud and the dry. He captured his first career overall podium at Unadilla and followed it up with a strong fourth overall at Budds Creek—he held the final podium spot until the final lap last Saturday. Let’s see if he can continue his recent run tomorrow. —Stallo

Jason Anderson returned to racing last weekend after missing the previous eight rounds due to injury. Sources told us that Anderson was far from 100 percent, but that he wanted to race. He finished a solid fourth in the first moto but was a DNS for moto two. “Had so much fun at the races missed it so much! 8 days riding I wanted to ease into it,” he wrote on Instagram after Budds Creek. “I had a good practice with a decent moto 1! Thanks to all the fans for welcoming me back!! Hopefully have a little more in me for 2 Motos in Indiana!” Let’s see how the supercross champ does with more prep time. —Stallo

NEVER CALL FOR A MUDDER BEFORE THE EVENT. Jason Weigandt loves to yell this from the rooftops anytime someone mentions the weather prior to an event. Credit where credit is due; he’s usually right. With that said, rain is in the forecast Friday and Saturday. A mud race could certainly change the outlook on the 450 title chase. —Stallo

We witnessed an El Chupacabra sighting in the second 450 moto last Saturday as Blake Baggett charged to a second-place finish. Steve Matthes asked him about the moto after the race, and Blake gave us this gem: “I just been out in the ocean looking for that sinking ship with all the treasure on it. It’s just been sitting on the bottom of the ocean floor.” We’ll see if Baggett can find more treasure this weekend and close the season strong. —Stallo