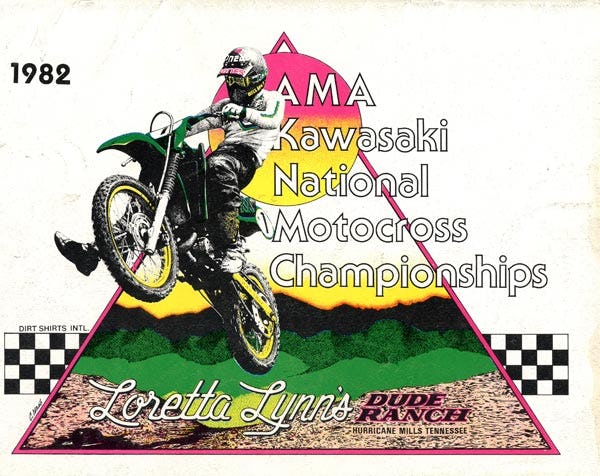 On This Day in Moto August 4

The first moto of the first AMA Amateur National Motocross Championship at Loretta Lynn's Ranch goes off in Hurricane Mills, Tennessee. The Open A moto is won by TNT Honda rider Emery Anden of Pennsylvania.

James Stewart appeared on the cover of the 1995 Loretta Lynn's program, shot the previous year when he was still on a 51cc YZinger.

At the Citadel in Namur, Belgium, Suzuki's Roger DeCoster and Husqvarna's Heikki Mikkola tied in points in the 500cc Grand Prix of Belgium. Mikkola won the first moto with DeCoster behind him; Roger won the second moto with Heikki behind him. DeCoster won the overall based on elapsed time, and the 500cc crown would have to be decided one week later in Luxembourg.

Meanwhile, in Mikkola's home country of Finland, the second-to-last 250cc Grand Prix was happening and Puch rider Harry Everts took the win with 1-4 moto scores to top defending 250cc World Champion Hakan Andersson went 3-2. The title combatants, Russia's Gennady Moiseev and Czech rider Jaroslav Falta, each had one good moto and then DNF'd the other.

Honda's Jean-Michel Bayle clinched the '91 AMA 250cc National Championship, adding it to the AMA Supercross title he had clinched earlier in the summer. Bayle went 4-2 at Southwick to secure the points he needed over his teammate, the two-time defending champ Jeff Stanton, who went 1-1 at Southwick.

In a stunning turn of events 250 class series points leader Jeremy McGrath injures his ankle at Spring Creek in Millville, MN, allowing Kawasaki's Jeff Emig to close in on him in the points. Emig goes 1-1 while McGrath, the defending series champion, can only muster 9-7 moto finishes through the pain. With his teammate Ryan Hughes finishing second and the Great Western Bank Kawasaki team's Phil Lawrence third, it's a 1-2-3 sweep for Kawasaki.