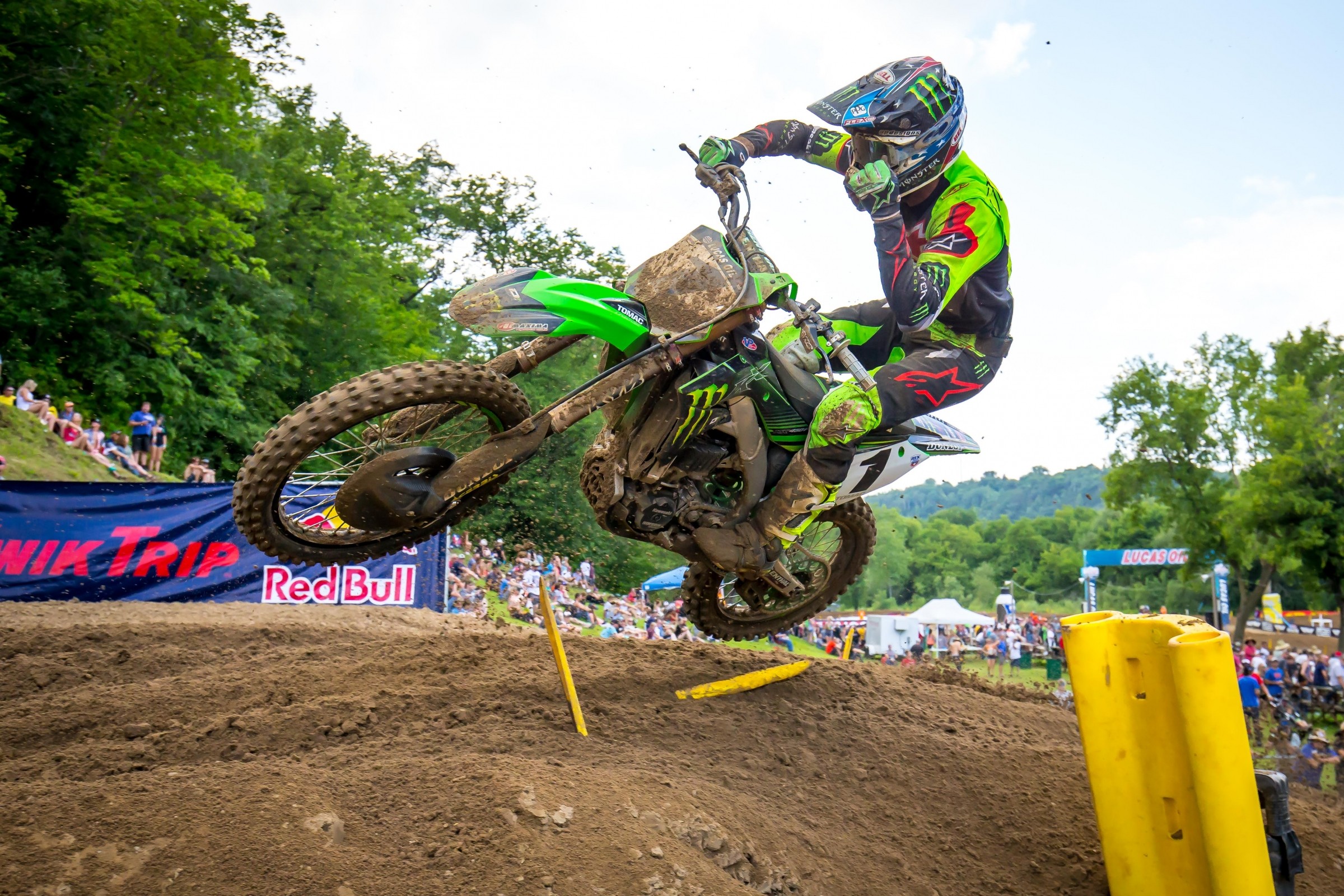 Intensity (inˈtensədē): Also referred to as fervency, violence, white heat, and fire. It’s a trait, cultivated ability, and powerful weapon that trainers will harp on relentlessly throughout the season. Most riders have a very small window of intensity above their normal race pace. For those, 100 percent effort is a finite 100 percent and there isn’t any more to give. Most riders, whether amateur or professional, know their limit and how fast they can go without the chance of a crash rising exponentially.

There are a chosen few, however, who just have a higher, almost inconceivable ceiling when push comes to shove. We have seen it over the years from riders like Bob Hannah, Ricky Carmichael, and James Stewart, just to name a few. When it’s all on the line, they have this superhuman capability to push the envelope. It doesn’t always work, and a big crash is inevitable for these talented few. But when it’s on display, like Eli Tomac’s final few laps at Spring Creek, it’s magic in motion.

Tomac’s heroic charge to the front wasn’t the first time we have seen supersonic speeds from him. His complete domination at Hangtown in 2015 and his epic come-from-behind ride in Salt Lake City back in 2017 both come to mind when he has simply been untouchable. Just a few weeks ago at Southwick, we also saw that unique ability to drop his lap time to unrealistic depths for most. The speed he can randomly muster surely has his competitors flustered at times. When riders like Marvin Musquin, Ryan Dungey, and Ken Roczen are helpless to respond, that speaks volumes. There is usually a soft limit on what the lap time floor will be in a moto. Riders have an idea of where they will probably be on a given lap, plus or minus a second or two. For Tomac to go four to five seconds quicker is just madness. Let’s take a look at a few of the races I mentioned and how the laps stacked up.

For Tomac to be able to put that much time into the field is just lunacy. The interesting thing about Spring Creek this past weekend was more about when he dropped the hammer on the field. The fastest lap data is still impressive, a 2:14.447 to Musquin’s 2:15.993. But on lap 14, when everything was on the line, that’s when Tomac made his mark. On a deteriorating track, almost every rider’s pace had dropped off significantly. On average, most riders had lost four to six seconds from their fastest lap. That drop-off is usually the result of fatigue, track deterioration, overheating, and overall lack of intensity. As Tomac was chasing Musquin, the same lap time drop-off was happening.

Musquin’s best lap was a 2:15.993, as mentioned, but lap 13 was a 2:19 and lap 14 was a 2:20. That’s normal, really, and usually not a huge problem. I say usually because Tomac was on the hunt. His ability to find that next-level speed and intensity propelled him to a mind-blowing 2:16 on lap 14. He closed a seemingly safe gap to Musquin in one lap and changed the entire outlook of the day. He went so much faster that lap that I was genuinely confused as to what I was watching. How did he just find four seconds on Musquin’s race-leading pace?

I know this column deals with analysis of technique and explaining how riders do what they do. In this case, I am not quite sure. Yes, he goes faster through the sand whoops, brakes later down the hills, and carries more speed through the turns. That’s basic analysis and could pass as an explanation. When it gets past that, though, it just doesn’t make sense how he can make those improvements turn into four seconds in one lap when Musquin is already pushing the pace. For comparison, let’s take a look at what Tomac and Musquin were doing on lap 14 compared to the rest of the field. That might better show just how incredible that increase in pace was.

Tomac has had his share of ups and downs both this season and last. He has won a lot of races, but also had weekends that had everyone scratching their heads. It seems he has figured out some of that variance in 2018, winning more often than not, and a mechanical DNF really keeping this title closer than it should be. If he can ever fully harness that ability to turn the intensity on and off as needed and drop his lap time to whatever the win calls for, the battle at the front might be an afterthought. We don’t often see a pace that can singlehandedly shatter the field. Speed like that is the stuff of legends.