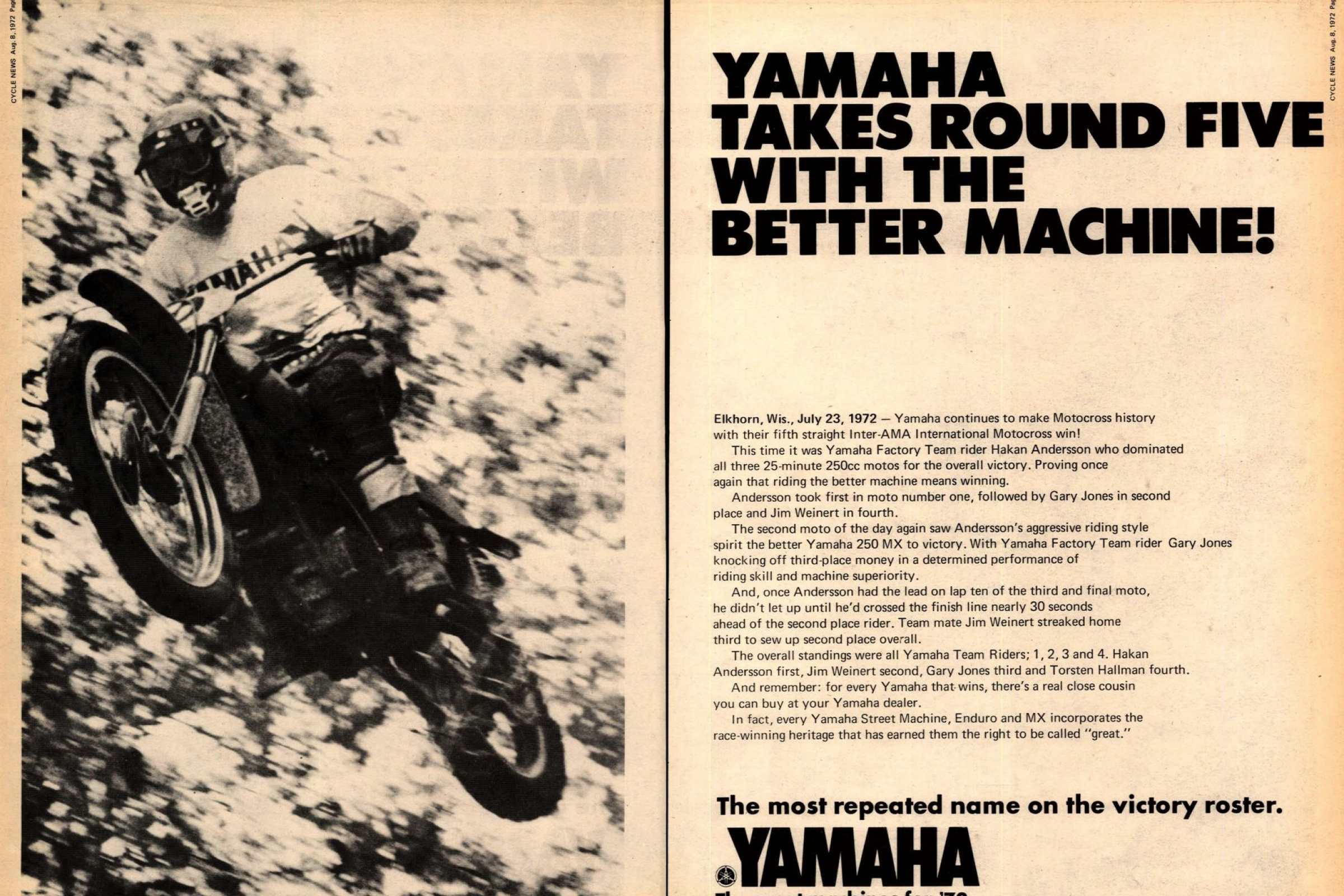 On This Day in Moto July 23

Team Yamaha's Broc Glover, the reigning AMA 125 National Champion, dominated the Valvoline 125cc U.S. Grand Prix of Motocross at Mid-Ohio. Belgium's Gerard Rond finished second overall and LOP Suzuki-mounted privateers Marty Moates and Mark Gregson were third and fourth, respectively. The race was somewhat overshadowed by the absence of the Russian and Czech riders after a dust-up between the old USSR and the U.S. government over the treatment of journalists and Russian dissidents.

Hakan Andersson won the Inter-Am in Elkhorn, Wisconsin. The top American, Jimmy Weinert, finished right behind him. And because this race overlapped with the nascent AMA 250 Pro Motocross Championship, it went down in the record books as Weinert's first win. He would go on to become a two-time AMA 500cc Motocross Champion, as well as the 1976 AMA Supercross Champion. He is in the AMA Motorcycle Hall of Fame. As for the Swedish rider Andersson, he would help reshape the motocross world one year later when he won the FIM 250cc Motocross World Championship aboard a prototype "Monoshock" Yamaha (and he's probably in the Swedish Motorcycle Hall of Fame, too).

At Cycle World USA in St. Peters, Missouri, Team Honda's Marty Smith and Tommy Croft finished first and second overall, with Smith posting a 1-2 tally. Kawasaki rider Gary Semics won the second moto, but was only 16th in the first. Smith's title rival Bob Hannah had a mixed day on his Yamaha, going 13-3.

Also in 1977, a 125cc Grand Prix was held in Canada and the winner was Andre Massant, a Belgian Yamaha rider, who went 1-2 on the day. American Honda rider Warren Reid also rode, finishing 3-1 for second overall. And Suzuki rider Gaston Rahier clinched his third straight 125cc Motocross World Championship with a runner-up finish in the first moto.

At the Washougal National, Eli Tomac and Ken Roczen swapped moto wins, with Tomac earning the overall with 2-1 scores. Marvin Musquin rounded out the top three with 3-3 finishes. This was one of only three races where Roczen did not take the overall win that year; his victory the following weekend at Unadilla would spark a five-race win streak that would continue into the 2017 supercross season until his infamous crash at Anaheim 2.

In the 250 Class, Alex Martin's 1-2 topped Austin Forkner's 10-1 and Cooper Webb's 3-6 scores. His victory on this day still stands as A-Mart's last national win to date. Webb would go on to take the title that year, and Forkner would finish fourth in championship standings in his rookie outdoor season.