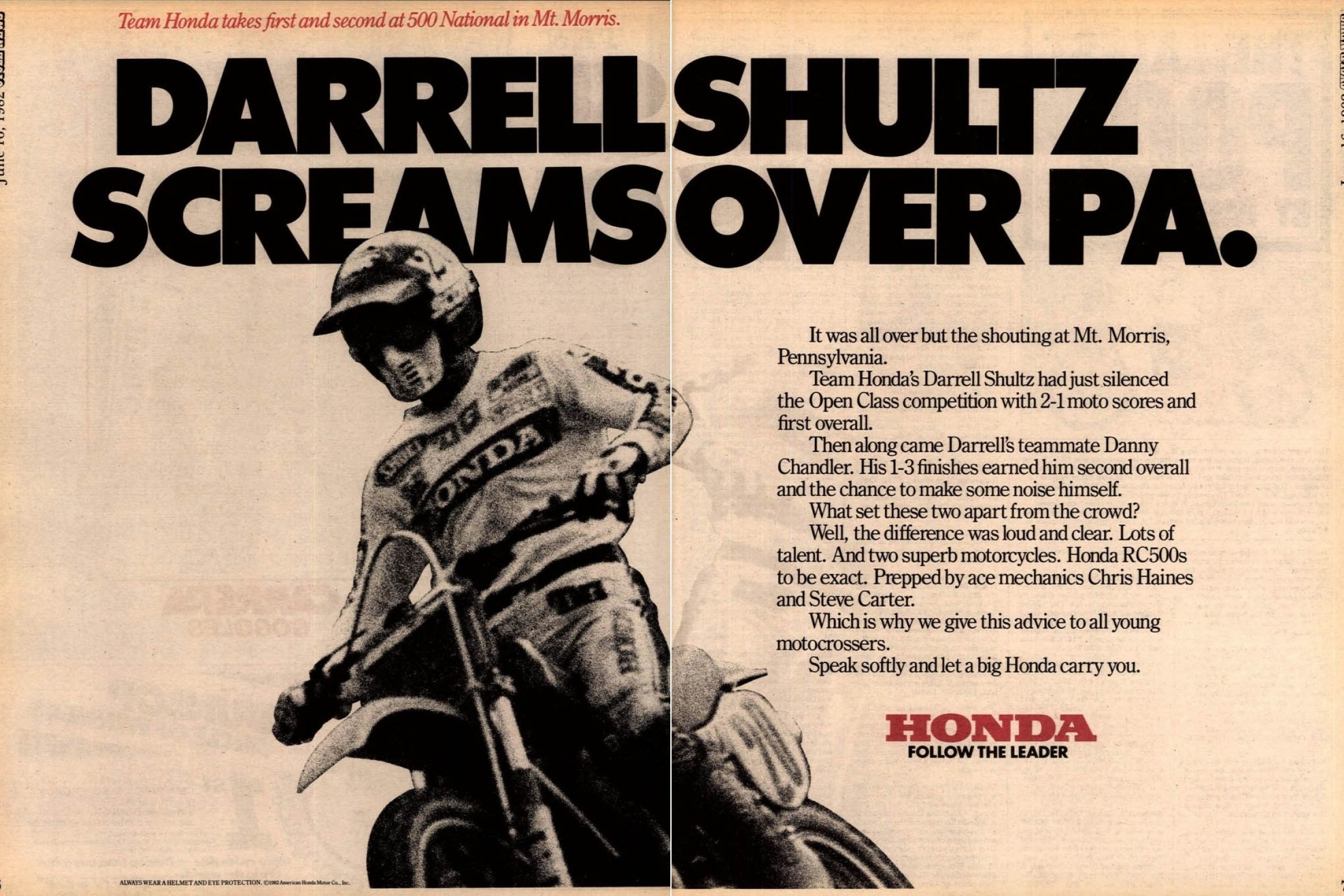 The 1976 AMA 500cc National Motocross Championship opened at Moto-Masters in Mexico, New York, and Husqvarna rider Kent Howerton grabbed the win on his Eric Crippa-tuned CR360 Husky. Yamaha's rookie Bob "Hurricane" Hannah, who was actually vying for the AMA 125cc National Championship, used an off-weekend from that series to finish second via 1-2 scores. And Tony DiStefano, Suzuki's 250cc National Champ, ended up third overall. Rounding out the top five were Kawasaki's Gary Semics and Honda's Rich Eierstedt. And since sixth-place Gaylon Mosier was on a Maico, the race featured six different brands in the top six overall.

In the 500 Class, Honda riders went 1-2 as Darrell Shultz topped Danny "Magoo" Chandler on the big bikes. Suzuki factory riders Alan King and Kent Howerton were second and third in the last year that Suzuki would officially participate in the class.

Interestingly, with the 125cc Class not in action at High Point, many of the top U.S. 125cc riders spent the weekend in Canada for the Toronto Supercross in what was then called Exhibition Stadium. The podium ended up being Mark Barnett (Suzuki), Johnny O'Mara, and Jim Gibson (Honda).

And in a battle that was brewing, Yamaha's Mike Bell told Cycle News that he was planning on skipping the upcoming Trans-USA Championship in the fall, saying he already had lucrative races lined up in Australia, Japan, and Europe, and his younger teammate Rick Johnson said there just wasn't enough money to commit to racing the fading Trans-USA Championship compared to what riders could make abroad. Also, because Yamaha was cutting budget left and right—the team was using mostly production bikes in 1982—it was announced that they would no longer be using the services of riding coach Gary Bailey, which also made sense in that it was his son David who Yamaha was trying to beat!

Here's a win ad for RJ at Hight Point, but not from Yamaha—they were severely cutting budget in 1982!

And this one is for Matthes: Ross "Rollerball" Pederson won the 1987 Montreal Supercross, the 11th running of this Canadian Classic. Check out the clever ad-speak below:

Favored son Damon Bradshaw, "the Beast from the East," won once again at High Point in Mount Morris, Pennsylvania, his last win aboard a Yamaha. Bradshaw, still bothered by the meltdown that cost him the '92 AMA Supercross Championship, would soon be on a long-term hiatus. He would come back a couple years later and win the last AMA National of his career at—you guessed it—High Point in 1997.

That same day, Yamaha's defending 125 National Champion Jeff Emig won the 125 Class over Honda's Doug Henry. It also marked the debut of the much-ballyhooed Robbie Reynard of Team Kawasaki. He had a shot to set the record for youngest winner ever, as his birthday was just three days earlier, but Robbie finished seventh behind some very, very fast guys: Emig, Henry, Jeremy McGrath, Ryan Hughes, Erik Kehoe, Ezra Lusk.... Right behind him were Larry Ward, Brian Swink, and James Dobb. That's some serious talent!

Suzuki's Greg Albertyn, the three-time FIM Motocross World Champion, was finally coming into his own on the AMA circuit, winning the High Point AMA 250 National and building a points lead in the championship. Albertyn went 1-1 to Honda rider Sebastien Tortelli's 3-2 and his teammate Ezra Lusk's 4-3. The 125 Class winner was a kid named Ricky Carmichael.