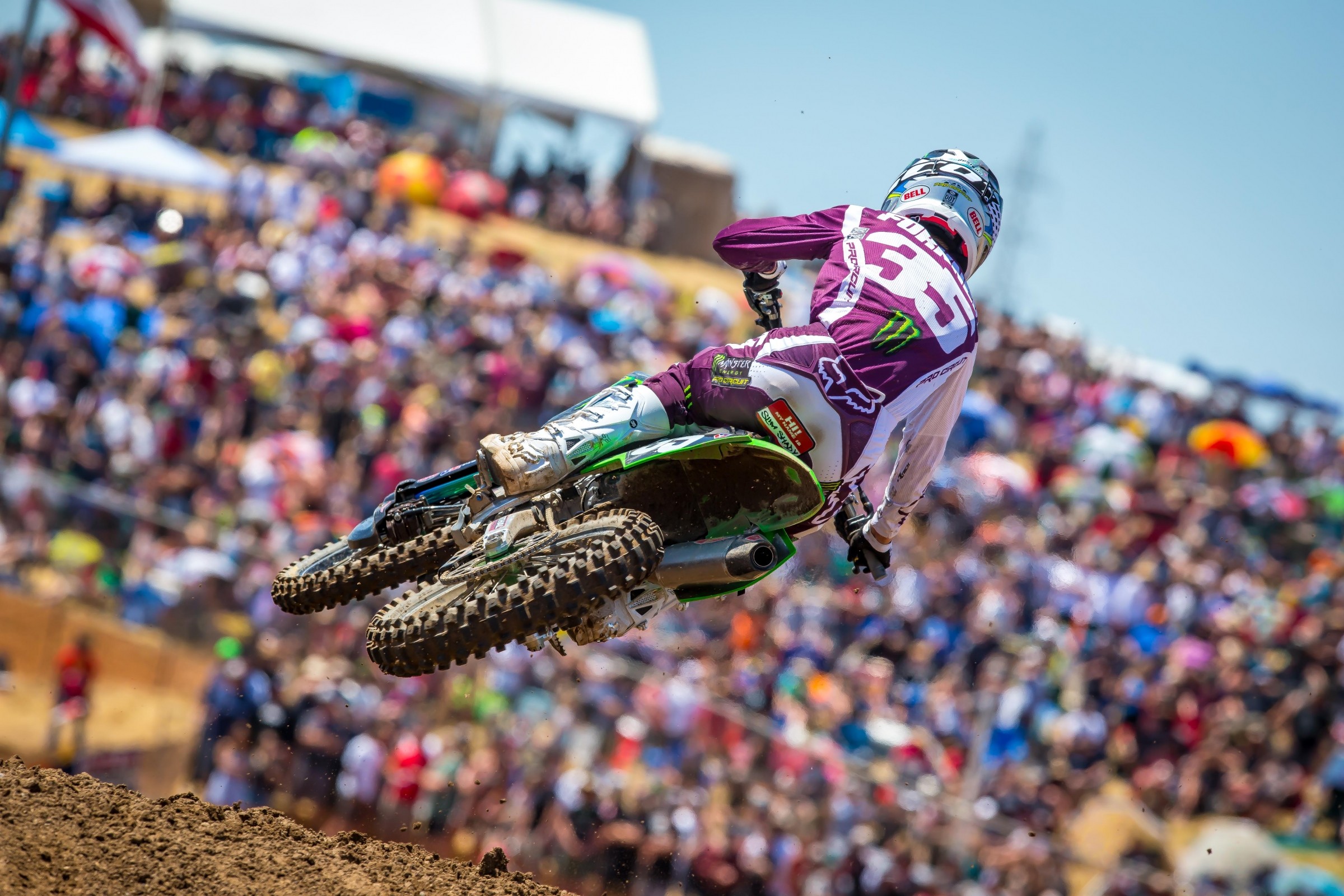 Comment: Justin Bogle is riding and is planning on coming back at some point this summer, but he’s out for Glen Helen.

Comment: Enticknap broke his collarbone in Minneapolis. He plans on being back for Washougal.

Comment: There is not an exact date set for Grant’s return. He’s not expected to miss the season, but he’s out for Glen Helen after fracturing his leg in Arlington.

Comment: There is no return date for Seely, who is out with a fractured sacrum and pelvis suffered in Tampa.

Comment: Tapia broke his pelvis, fractured his L3 and L4 vertebrae, and had internal bleeding after crashing hard in Indianapolis. To help him out, go here.

Comment: Tedder may be back toward the end of the season after undergoing surgery to repair a wrist injury suffered as an amateur that was greatly reducing his grip strength.

Comment: Webb is out with a fractured leg suffered in Minneapolis. Alex Ray will fill in starting at Glen Helen and will race through High Point. At that time, it will be on a week-by-week basis until Webb is able to return.

Comment: Wilson crashed while practicing at Glen Helen and suffered a torn ACL. He had surgery and is now recovering. He’s not expected back soon.

Comment: Davalos is out after undergoing knee surgery. He’s also recovering from a herniated disc and fractured C7 vertebrae. He is out for the season.

Comment: Decotis is slated to start riding after Glen Helen and hopes to be back for the Muddy Creek National.

Comment: Ferrandis was recently cleared to start riding again after breaking his arm and a few teeth in Atlanta. He stated on Instagram he hopes to be back for round three or four.

Unfortunately I will not ride the round 1 of @promotocross because of my arm injury, the good thing is I have the green light to restart to ride now so I hope to be back for round 3 or 4 ????.

Comment: Forkner is planning racing Glen Helen after “popping some ribs out” at Hangtown.

Comment: Harrison crashed before Hangtown while practicing and suffered a minor AC separation. He plans on getting back to racing at Thunder Valley.

Unfortunately was not able to ride at Hangtown this weekend due to a practice crash last Friday. I have a minor AC separation, and thankfully I have a great team behind me to support me until im ready to come back and give it 100% @rockstarhusky @husqvarnamotorcyclesusa @rockstarenergy ? @shepherdphotos

Comment: McAdoo is back riding after breaking his shoulder blade in a practice crash. The team hopes he’ll be back for High Point.

Comment: Mellross crashed at Hangtown and fractured his scapula. He’s out for four weeks.

Well Hangtown wasn’t the outcome I wanted. I was feeling great on the bike all morning and qualified 14th with some good times. Unfortunately when it came race time I tightened up and was making many mistakes. I ended up having a pretty big crash late in the race which ended my day. I will be seeing the doctor tomorrow to see what we are dealing with. Hopefully everything checks out good but I’ll keep you guys updated when I know more. Thank you the the entire @cycletraderrockriver team for being so supportive. ???? . . @cycletraderrockriver @enzo_racing @officialmooseracing @rockriverpowersports @roostmx @51fiftyenergy @yamahamotorusa @yoshimura_rd @ridedunlop @bikebld @skullcandyoz @hammernutrition @mxstore @ethika . . #supercross #sx #mx #motocross #motorcycle #motorbike #motorsport #moto #dirtbike #bike #bikelife #track #fit #athlete #photoshoot #photography #malemodel #fitness #fitspo

Comment: Nichols is currently out after breaking his humerus. He started riding earlier this week and is hoping to be back by round five or six.