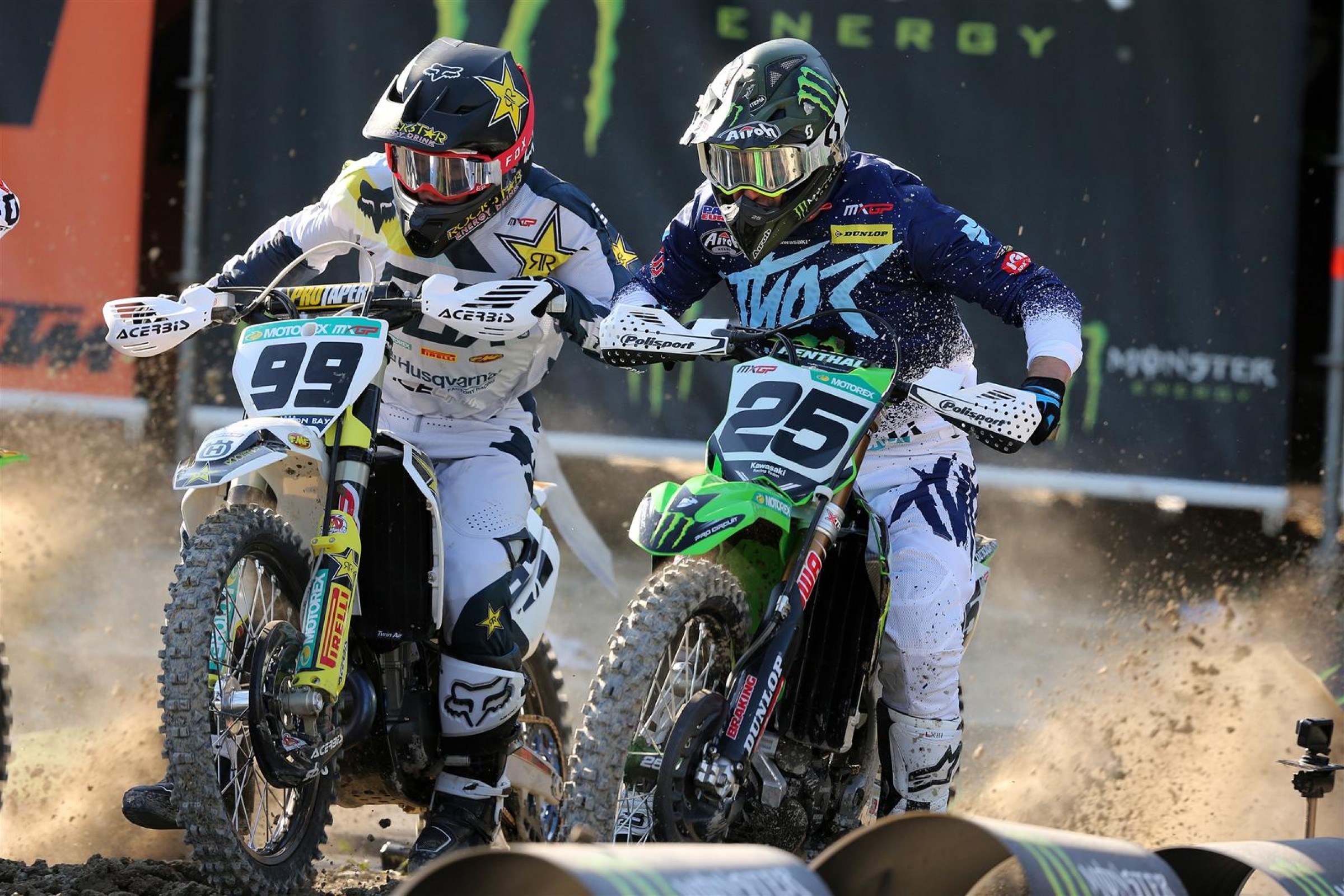 GP Report 5 Things We Learned at the MXGP of Russia

A labor day early week slot for round six of 20 in MXGP, and the incessant drops and climbs of Orlyonok was the setting for the second annual visit to Russia. With views of the expansive Black Sea in the background and a touristy vibe around the facility 130 miles south of Sochi (home of Russian F1 and 2014 Winter Olympics), the Grand Prix escaped the deluge of rain that washed out the 2017 edition and was the stage for a slight shock to the system in the premier class, with Monster Energy Kawasaki’s Clement Desalle becoming the first rider to steal a moto win and overall victory from Red Bull KTM this term. What else cropped up from the East?

“I want to congratulate Clement; the first time someone has been able to get between Tony and me for first and second this year, so he did a great job.” MXGP championship leader Jeffrey Herlings was not being disingenuous with his praise of the Belgian and the second most successful rider in the premier class this decade. Desalle had success previously at Orlyonok, having won the inauguration ten months earlier—his last GP success before the renewal of his Russian honors, and it was achieved in near-swamp conditions. Tuesday’s feat was in a markedly different and significantly better climate: Desalle was as bright as the weather in his first moto escape from the KTMs.

Although Desalle has been the closest to the Herlings-Cairoli axis this year on several occasions, what was the difference here? Herlings admitted that he struggled to find his flow in the first race, only coming strong in the final five minutes of the dash, while Cairoli confessed that he toiled all weekend on a track he almost dismissed outright and disliked from the outset. Desalle cited his good starts again on the KX450F, and although he had little to match Herlings’ holeshot and disappearance in the second moto, he was good enough for the overall and the first non-Red Bull KTM honors of the year and the six rounds so far. While the Herlings-Cairoli dice holds its own powerful narrative, the inclusion of a third member not only throws a sprinkle of spice to the title broth, but also encourages other ingredients to line up for inclusion. It means incentive for the likes of Romain Febvre, Tim Gajser, Jeremy Van Horebeek, and Gautier Paulin that KTM are actually beatable.

“Clement is coming back and getting more into the mix, which is great for the championship,” Cairoli said, who publicly sought the positives from his third-place finish (“I want to be on the podium every race and we are doing that so far”), and stopped short of confirming that this was one of his most ineffective outings of the season. The Sicilian was especially disappointed with two tumbles in the second moto that dumped him to fifth place and allowed Gajser and Febvre to squabble for third spot.

2. Herlings and Cairoli continue to tease

Herlings holds almost a moto over Cairoli in the championship (23 points), and we’re struggling to remember a time when Cairoli was staring at the same growing deficit in a season when fully fit. It is testament to Tony’s excellence that when tackling a track he rated as “strange,” he was able to obtain yet more silverware and limit the damage administered by his teammate.

“This is not my favorite [track] at all, and I struggled a lot and was quite far in timed practice from the fast guys,” he lamented. “Not easy to start the weekend when you are quite slow…but I knew the race would be different and I could keep the pace.”

The finale of the first moto saw some close and riveting action between the pair for second place as Herlings looked for lines and passing spots on a trajectory that was frugal in this respect. Cairoli prevailed.

“Jeffrey is very fast, especially at the beginning and ends of the motos,” he observed. “It was very aggressive…but this is motocross and we both ride to be in front of each other. It was okay, nobody crashed, and it is always good like this. We are looking forward to more battles.”

The cordiality within the team remains, despite some tight moments on track already. As the races click down and the points situation becomes more critical, it will become increasingly fascinating to see how each athlete and their groups within Red Bull KTM handle the scrutiny. The Grand Prix of Latvia is next; a shallow sandy scene of Herlings’ maiden MXGP victory in 2017, and it could be further hay for #84.

Sensational might be a fitting word to describe Orlyonok. First used as the FIM Junior World Championship site two years ago, the picturesque and rolling circuit almost makes the process of two flights and a long drive to the edge of the Black Sea a bearable process. Again, the Grand Prix received copious attention from an eager public and the ceremonial presentation involving a local school demonstrate just how much the community actively absorb and embrace the sport. Refreshing scenes.

The track itself is curious. TV commentator and presenter Paul Malin described it best in his intro segment when he labeled the course old-school due to the elevation changes and cambered sections. Some riders were critical of the preparation of the hard pack; the subsequent watering created a slick and perilous surface that caught out a number of experienced racers.

Shaun Simpson cross-rutted on Monday and smashed his ribs and hip, Russia’s focal point—Kemea Yamaha’s Vsevolod Brylyakov—twisted his knee in Tuesday’s second moto, and the luckless MX2 athlete could be facing another injury recovery after his shoulder problem in 2017. The speed and flow of the short track made for some spectacular imagery, and riders circulated close together or bounced off each other trying to force moves or avoid those that had fallen victim to mistakes. It was one-liney and restrictive. Some felt the need for caution, and this was the case for Rockstar Energy Husqvarna’s Thomas Covington. The American was riding for the first time since damaging the ACL and meniscus in his left knee and managed points in 16th overall. He commented on the need to avoid more risk on the slippery ground, and he will build confidence and strength in the joint in the coming weeks.

The organizers continue to learn at Orlyonok, and this was actually their first Grand Prix in dry and reasonable conditions.

4. Jonass back on the boil before Latvia fixture

MX2 World Champion Pauls Jonass wandered in from two Grands Prix, where his fans and followers must have wondered what was going on. The Latvian decimated the first three rounds and six races of the year, but then managed only one top-three moto finish in visits to Italy and Portugal. Russia saw #1 back on form with pole position and a 1-1.

“Winning from six from six was great, but maybe I got too comfortable and confident and lost some focus going to the races,” he offered by way of explanation. “In Italy and Portugal, my intensity wasn't there and I didn't feel like myself. I was really bummed about those two GPs, so we went back to hard work in Belgium.”

MX2 still belongs to KTM. Jonass and teammate Jorge Prado (the young Spaniard profiting most from Jonass’ mini-malaise) have taken all six of the Grands Prix to date and have finished 1-2 in three of them. In Orlyonok, they separated from the pack by more than 35 seconds in the second moto. Both racers are on different trajectories. Even if he fails to defend the MX2 crown, Jonass is set for the MXGP class in 2019, and Prado could make the switch to supercross and AMA competition if he bags the championship at the age of 17. Twenty points is the current difference.

Jonass, Latvia’s first World Champion, will undoubtedly be the star of the show at Kegums for round seven the weekend after next.

MX2 still misses the talent of Hunter Lawrence (due back in Latvia after recovering from a broken hand), and Rockstar Energy Husqvarna’s Thomas Kjer Olsen has wavered slightly from being the orange brigade’s nearest runner. Russia saw Kemea Yamaha’s Ben Watson become the latest podium debutant. The young Brit has been hounding the fringes of the winner’s circle in recent weeks and was less than half a second from achieving his milestone last time out in Portugal. His 3-6 at Orlyonok was enough to pop the cork in just his sixth outing as a factory-backed racer.

There was an air of concern Saturday morning in the Red Bull KTM setup, with Jeffrey Herlings yet to show his face. The Dutchman was one of several team members to have lost luggage and been stranded in Sochi due to the disruption, meaning a hurried dash to the circuit and losing out on the first free practice session. Rumors of Herlings even missing the chance to log the timed laps necessary to ensure his qualification and participation started to grow until #84 showed up and hurriedly made the session, going on to claim pole position.

“I’ll be as happy as a kid to see my bed; it was a long trip,” he said on Monday. “We had some bad luck with the baggage and had to fly somewhere else to pick it up, then drive a long way and made it here just in time. In timed practice, we were struggling a bit.”

Herlings favors a late arrival and early departure at Grands Prix and elects not to use a motorhome, preferring the refuge of the team truck, hotel, and Red Bull hospitality. It remains to be seen whether the stress in Russia will force a review of the travel system. The 23-year-old hasn't enjoyed the best of luck at this Grand Prix. Back in 2012, he won the event in Semigorje, but was lightly injured in a car crash while returning to Moscow.