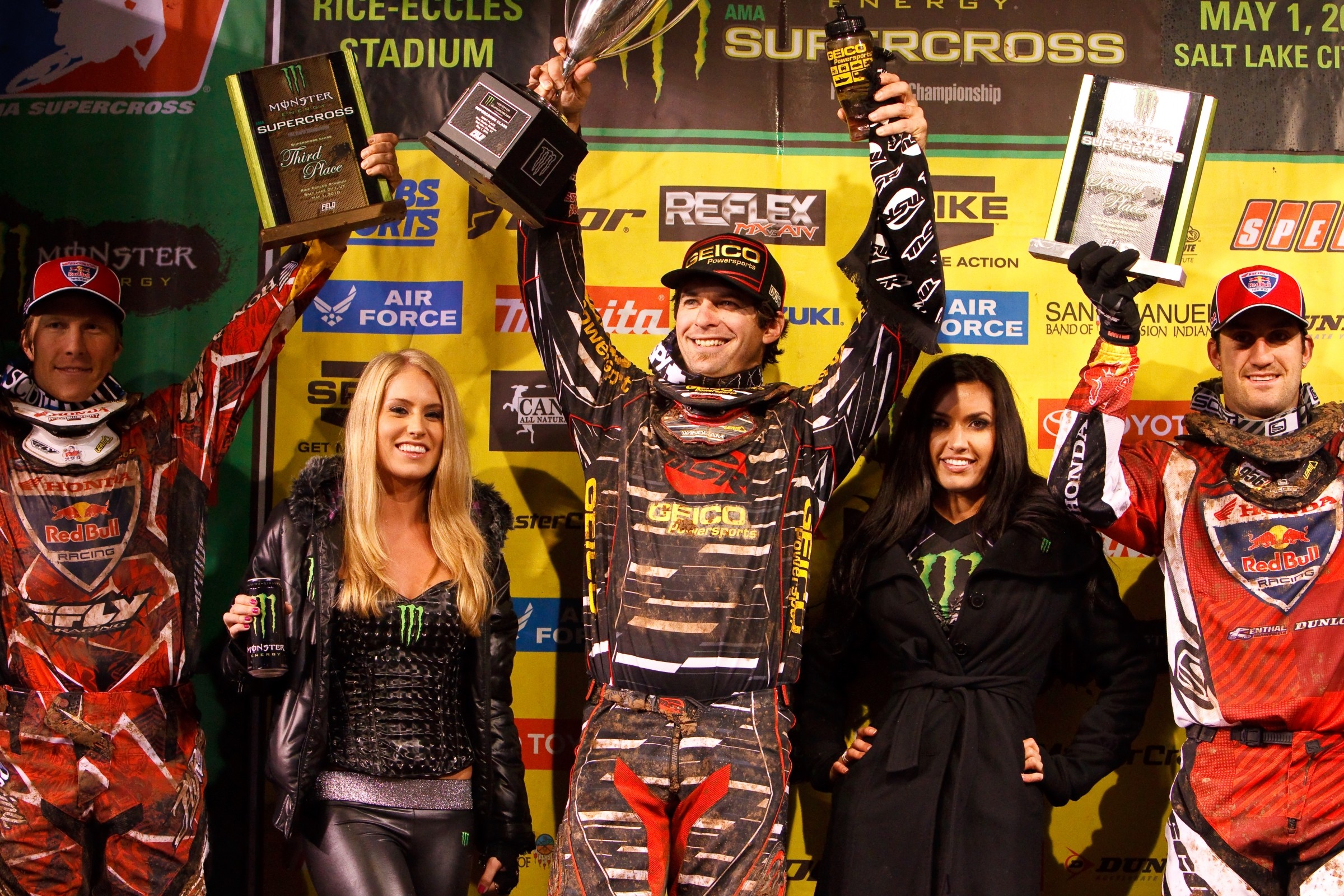 On This Day in Moto May 1

And something actually happened earlier today: Monster Energy Kawasaki's Clement Desalle finally put a stop to the KTM stranglehold at the top of MXGP by winning the Grand Prix of Russia. Desalle went 1-2 to top the 3-2 of series points leader Jeffrey Herlings. It was the first time this year that a brand other than KTM won the MXGP overall.

At David Bailey's Lake Sugar Tree MX in Axton, Virginia, the champion played the role of promoter for the AMA 125/250 National. Team Kawasaki's Jeff Ward topped the 250 Class with 1-1 score to the 3-2 of Yamaha's Broc Glover and the 4-4 of Ward's Kawasaki teammate Ron Lechien.

In a remarkable effort, Honda rider Guy Cooper showed up at Lake Sugar Tree with his leg in a fiberglass cast. Cooper has been out for three months with a broken leg. Yet, somehow, he raced with the cast under his boot and finished 1-3 in the two motos to take the overall win. His teammate George Holland finished second overall, while Suzuki factory rider Donny Schmit was third.

Meanwhile, over in Europe, one week after winning the Spanish FIM 250 Grand Prix, American ex-pat Rodney Smith struggled to 10-9 scores in Italy. Yamaha's John Van den Berk, the '87 FIM 125cc Motocross World Champion, went 1-1 in his third 250 GP. American rider Ricky Ryan finished fourth overall. And yet another U.S. citizen, Louisiana's Trampas Parker, was loaned the works KTM of the injured Heinz Kinigadner and was actually winning the first moto on it before mechanical problems knocked him out of the race. Parker would return one year in the 125 class and win the same race to start his '89 125cc World Championship season.

On the same day that Formula 1 champ Ayrton Senna died in a crash at the Italian GP, which cast a pall over all of motorsports, the second AMA 125/250 National of the season went off at Hangtown. Team Kawasaki riders Mike Kiedrowski and Mike LaRocco split moto wins, but it was the "MX Kied" who got the overall. Further back, Team Honda's Jeff Stanton, the six-time AMA Supercross and 250 Motocross Champion, crashed and suffered a serious concussion. It was the beginning of the end of Stanton's excellent career, as he would announce his retirement within a couple of months.

Over in Europe, Team Chesterfield Yamaha's Donny Schmit won the first moto of the Austrian FIM 250 Grand Prix, but ended up second overall to Kawasaki's Stefan Everts after the Belgium topped him win the second moto.

And in South America at the Argentinian 125cc Grand Prix, Americans Bob Moore and Bader Manneh were the moto winners, with Moore going 1-2 to take the overall and Manneh going 3-1 to score second overall. Italy's Alessi Chiodi ended up third. Here is some video (albeit French) of the 1994 FIM 125cc Grand Prix season:

It was the day of the annual Pontiac Silverdome doubleheader, and AMA Supercross Champion Mark Barnett took the win aboard a Suzuki. Yamaha riders Mike Bell and Broc Glover rounded out the podium, with Honda's Bob Hannah fourth and Kawasaki's Jeff Ward fifth.