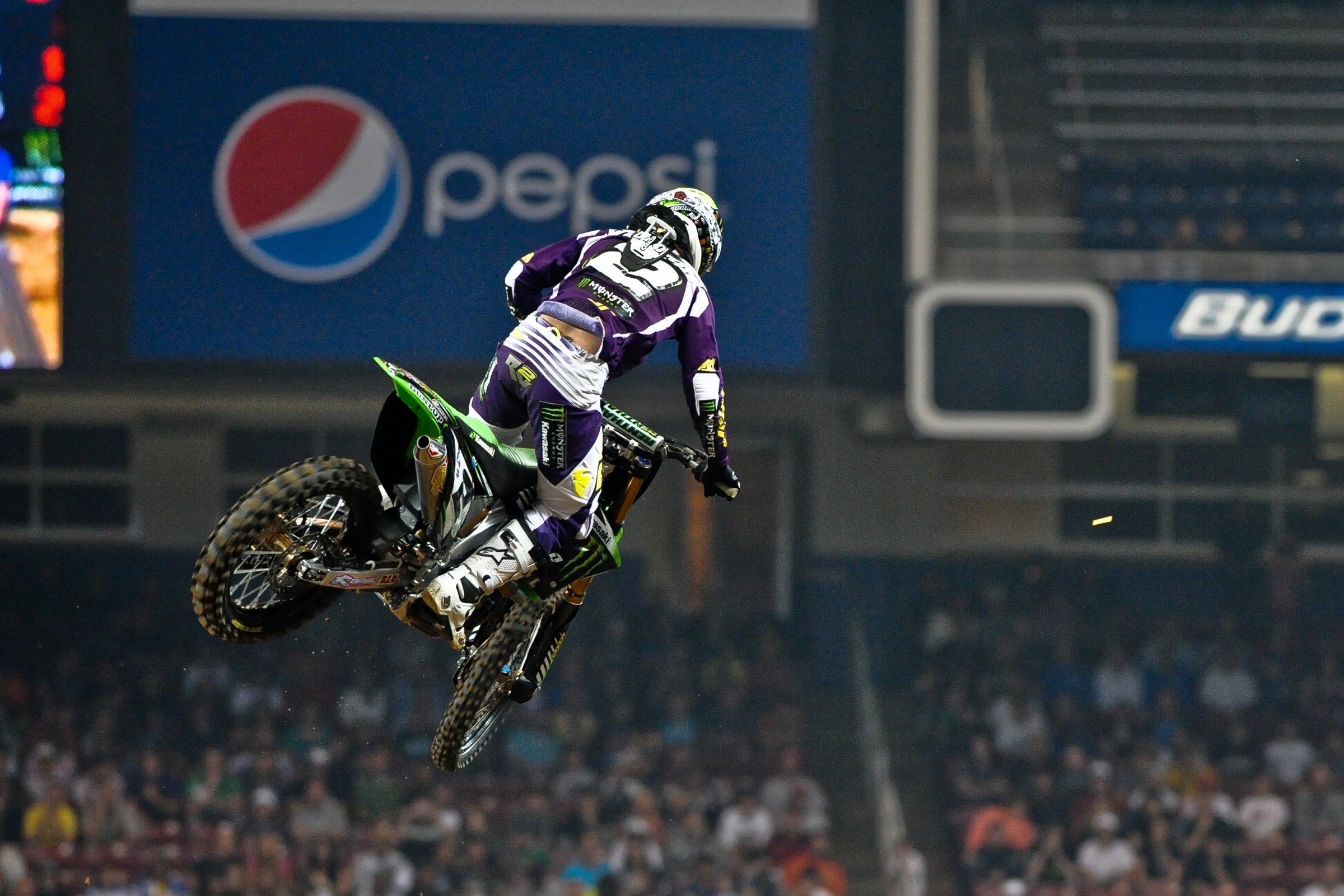 On This Day in Moto April 17

On a dramatic night in St. Louis, the battle for the 2010 Monster Energy AMA Supercross Championship would be settled, but not in the way anyone expected. Halfway through the main event, Kawasaki's Ryan Villopoto slammed into Makita Suzuki's Ryan Dungey, knocking both of the series’ leaders to the ground. Villopoto got up first and tried to get away, hoping to win a third straight main event. However, he mistimed a tricky rhythm section and had to step off his KX450F midair, breaking his tibia/fibula and ending his 2010 season on the spot. Dungey went on to take the win and would soon clinch the championship, his first of four career 450SX titles.

Go to the 28-minute mark to see where the real drama begins to play out:

A one-time only AMA Pro Motocross National was held at Hillside MX Park outside of Nashville, Tennessee, and the winner was Connecticut's Jimmy Ellis aboard a Can-Am. Suzuki's Tony DiStefano, the reigning two-time AMA 250 National Champion, was second, and Bob "Hurricane" Hannah, who was racing primarily in the 125 Class in '77, finished third. Team Honda's Jim Pomeroy and Marty Smith rounded out the top five.

At the time, no one could have known that this would be the last major AMA race win for the Can-Am brand, which was falling into financial disarray and would soon fall far behind the Japanese OEMs. Just two years earlier, Can-Am won the 1975 AMA Supercross Championship, and the year before, the brand finished 1-2-3 in the final AMA 250 National standings.

Over in Europe, Suzuki's Roger DeCoster won the opening round of the 500cc FIM Motocross World Championship in Austria while Akira Watanabe, another Suzuki rider, won the 125 Grand Prix in Italy.

How about some indoor hillclimb? That's what was taking place at the Seattle Kingdome in a 1985 motorsports thrillshow!

It was the first night of the annual doubleheader at the Pontiac Silverdome, and Team Kawasaki's Mike Kiedrowski got his first AMA Supercross win in a venue other than Daytona. The "MX Kied" bettered Team Honda's Jeremy McGrath, putting an end to a three-race win streak for the rookie who was running away with the series points lead. Finishing third was Michigan's own Jeff Stanton, followed by Suzuki rider Guy Cooper.

Team Honda's Ezra Lusk took the win under the roof of the Superdome in New Orleans, followed by Yamaha's Jeremy McGrath and Suzuki riders Robbie Reynard and Larry Ward. Yamaha rider Tim Ferry settled for fifth. The win was the tenth career AMA Supercross triumph for Lusk, but even bigger was the fact that by finishing second, McGrath won his sixth career AMA Supercross Championship.

In the 125 class, Yamaha of Troy’s Ernesto Fonseca got yet another win, followed by Georgia's Robbie Horton and Michigan's Nick Wey. The win was enough for Fonseca, a pure rookie, to clinch the 1999 AMA 125cc East Region Championship.