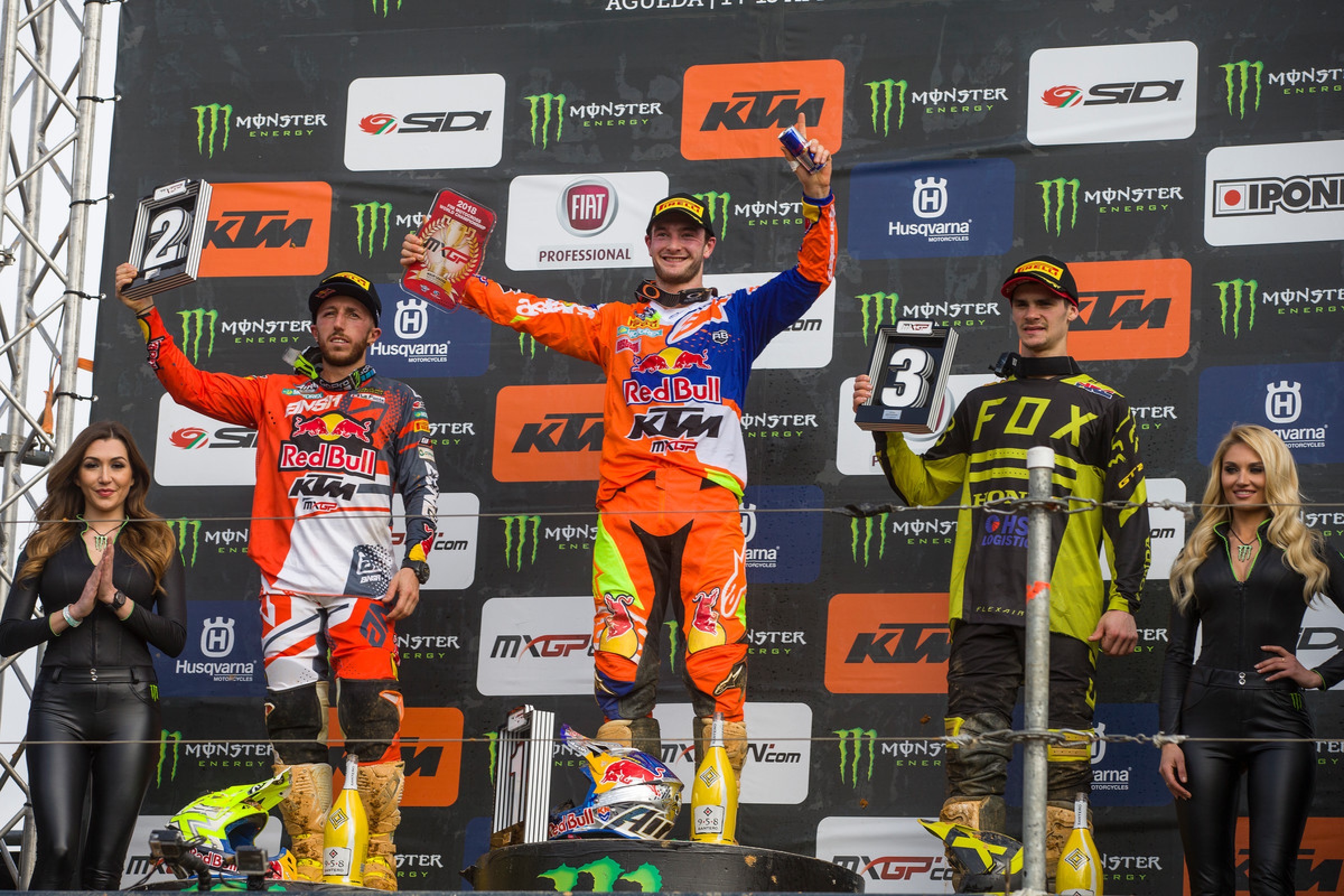 GP Report 5 Things We Learned at the MXGP of Portugal

MXGP moved from the restrictive hard-pack of Arco di Trento in Italy last weekend to a soft, rough, and line-littered course in Agueda, Portugal, for round five of 20. Here’s what went down in the latest episode of Grand Prix.

A new installment of the Herlings-Cairoli duel fell into the hands of the Dutchman, who recorded his third 1-1 of the year—second in a week—and gained six points on his teammate, who went 2-2. There were also the first flashes of rivalry in a championship contest that Antonio Cairoli is already admitting is “very difficult.” He has repeated more than once that both himself and Herlings are the only ones able to set the pace in MXGP—almost as if he is rebuking or taunting others like Tim Gajser, Romain Febvre, Clement Desalle, or Gautier Paulin to start mixing among the affair.

There is an element of Jeffrey Herlings’ game that hinges on emotion. Back in 2012 at Agueda, an on-track run-in with wild-card and soon-to-be European champion Mel Pocock saw the then-17-year-old unloading an expletive-laden rant to TV cameras immediately post-race. Six years later at Agueda, the somewhat calmer, more mature, but still irked world championship leader was also spurred to comment again in the first minutes after passing the checkered flag. His visible annoyance that Cairoli had swerved across him out of the gate prompted Herlings to say that 2018 could be “a very long year if it is like that.” By the time of the press conference nearly 30 minutes later, however, a collected #84 commented that, “I probably would have done the same…” when giving further reaction to Cairoli’s blocking tactics. Still, it was the first rumblings of how things could quickly turn ugly.

On Friday, Cairoli had entered the Red Bull KTM awning for the first time at the Grand Prix, and upon seeing Herlings—the rival who defeated him on home turf just five days earlier—gave a friendly greeting with no hint of tension. Whether that bonhomie can continue will depend on whether Cairoli pursues a strategy of pushing Herlings’ buttons; the rattling/blocking tactic out of the gate was something tried vigorously and repeatedly by Dylan Ferrandis in 2016 and earned Herlings’ (rightful) public ire over the hazards of such an approach. Dylan hardly seemed to care at some of the rebukes administered in public; in fact, the French star actually appeared to like driving Herlings to distraction. It hardly stopped Herlings’ momentum, however. Cairoli also has some form at this game as both the instigator and victim in his MX2 exchanges with Christophe Pourcel in 2007.

Cairoli is a far more experienced competitor and a class act at assessing when to make a move and when to hold back. His moves that skirted the limits of the track markers to pass Gautier Paulin and Tim Gajser in the same location in the first moto while rallying from a poor start was vintage case of inventiveness and guile from the Sicilian. Cairoli sported a badly swollen right eye between the motos, courtesy of an errant Portuguese rock, and knowing it would likely affect his second moto speed (it did) could explain some of his eagerness to close Herlings’ trajectory out of the gate.

Regardless of where this story will head (oh, please continue and evade the influence of injury!), Portugal was a little glimpse of Herlings starting to gain the upper hand after three wins from the last four—in sand, hard-pack, and rutty terrain—taking his career tally up to 71 while doing so. Red Bull KTM are also still unbeaten in both classes, as Jorge Prado sealed his double for the week in MX2 with a shutout and produced an astonishing turnaround from 2017 where he withdrew from both motos in Portugal.

Incessant rain through the week, showers on Friday, and another dowsing Saturday night (which caused the second WMX moto to become what overall winner Courtney Duncan would describe as a “mudfest”), it was startling what the club at Agueda and Youthstream staff managed to achieve with the red soil in very challenging conditions. The track was salvaged for Saturday and had a narrow escape on Sunday when the heavens opened less than an hour after the last checkered flag had fallen. The end product of all that work and some careful curating had Herlings purring that it was the best of the year. Third-place Tim Gajser, on the MXGP box for the first time this season, was also complimentary.

“Some of the track was actually underwater in the week…so I think the crew did an amazing job,” the Slovenian said. “It was still pretty soft on Saturday with many ruts, and line selection was crucial; it was important to find the smoothest and shortest line. It was tough, but I enjoyed it.”

It didn’t look too enjoyable. Many commented on how sapping the “spongy” ground actually was, and there were pockets that seemed to catch and hold the bikes, but it was a track that could be attacked, and the freedom—which was so scant at Arco di Trento—was lapped up by most. Credit where it is due. It was also encouraging to see the circuit very busy in the public enclosures; the scary forecast and dampening effect during the build-up did not deter the fans.

A Grand Prix moto win the week before? Check. A great start to sit in second place and contemplate attacking Jorge Prado in the first moto in Portugal? Check. A large dose of misfortune? Dammit. The black clouds that hovered over Agueda focussed solely on Thomas Covington for the latest slice of bad luck to strike the Rockstar Energy Husqvarna rider. The #64 caught his left leg and yanked the knee he damaged at the 2017 Motocross of Nations after just six laps. TC cut a figure that was resigned, accepting and curiously optimistic upon visiting the awning after the incident. The 22-year-old was fearful over the state of the ACL that was repaired in the off-season, but is due a scan today to learn the extent of the damage. Covington already races without a ligament in his right knee, so the optimism could come from the knowledge that being competitive in the MX2 class is still possible and the Portuguese affair might not be year-ender. Follow the Husky man on his Instagram for an update on Monday. Covington now joins countryman Darian Sanayei on the sidelines, with both Americans assessing the same type of ailment.

There were some fine sights in Portugal: Australian Jed Beaton excelling for his second career podium finish and giving the Dutch Kawasaki F&H team their first trophy (not to mention the brand’s first top three appearance since Ferrandis walked the rostrum in the Czech Republic in 2016), Jorge Prado starting and escaping without threat in MX2, and Kemea Yamaha’s Ben Watson being 0.1 seconds from passing Rockstar Energy Husqvarna’s Thomas Kjer Olsen for second place in the second moto to gain his very first overall top three. Watson is frequently thumbing the wrapped cork of the MX2 champagne—it must be only a matter of time for the fast Brit.

There were also some disappointing moments. With three MXGP wins since 2010 and another podium result, Monster Energy Kawasaki’s Clement Desalle was actually the most successful premier class rider at Agueda. The Belgian’s second moto run to third place was proof that he would have been odds-on for a fourth top-three classification of the season. Instead, his scorecard was wrecked by a first moto DNF. Desalle entered the pits after three laps while holding third and seemed to have an issue with the rear of the KX450F. An attempt to rejoin the race was stopped by his technical crew, and he eventually trudged angrily and disappointingly back to the paddock. It was a surprising hole in his points accumulation that presents an even bigger divide to the KTMs and was a blow for Desalle’s impressive consistency thus far. Rockstar Energy Husqvarna’s Gautier Paulin was an early second moto victim of the same malaise. The teams both offered descriptions of the glitches as “technical issues.”

The attrition permitted Monster Energy Yamaha’s Romain Febvre the chance to leap into the top three in championship standings. Desalle’s claim in Spain three weeks earlier that the KTMs “won’t be able to have 20 GPs at that level” was common sense talking, but there was a feeling in Portugal that Kawasaki and Husqvarna have already used one of their very few “Jokers” against the likes of Herlings and Cairoli this term.

A swift trend in MXGP has led to the majority of the gate electing for a frantic rear wheel change in the final minutes after the sighting lap and before the riders need to filter into the gate. It is part of a series of moves by teams to seek marginal gains in a competition that is already fierce and with two strands—the Red Bull KTM face-off and KTM versus all the rest. Fresh rubber for the metal gate grill, tire warmers to heat the compound a few degrees for optimum grip, and continued work with electronics to ensure as little wheelspin as possible (but still maintaining full 450 torque once over the steelwork) are the technical considerations aside from the onus on the balance, position, and reactions of the rider.

Jeffrey Herlings, a rider not renowned for his starting prowess, was the owner of another holeshot in the first MXGP moto, and the establishment of KTM’s own start device and RPM indicator seems to have helped the Dutchman with one of the very few weaknesses to his game. The fad for clean tires in MXGP could be under threat, however. Crowded start areas and frantic activity in a tight space are prompting the FIM to review the regulations for the start procedure. Discussions are taking place, and while it seems unlikely that the governing body will eliminate the possibility for teams to address technical needs after the sighting lap (and thus having time to switch wheels), there could be an adjustment to the amount of personnel available to make such changes. Keep a watch out for revised race routines in the coming Grands Prix.

From the freezing temperatures of Holland, the punishing slipperiness of Italy, to the demanding slopes of Portugal, MXGP now exhales and parks the race trucks. Most crews will again revert to overseas freight for the second Grand Prix of Russia at Orlyonok and on the slightly unusual slot of Tuesday, May 1, a major holiday date in the country.