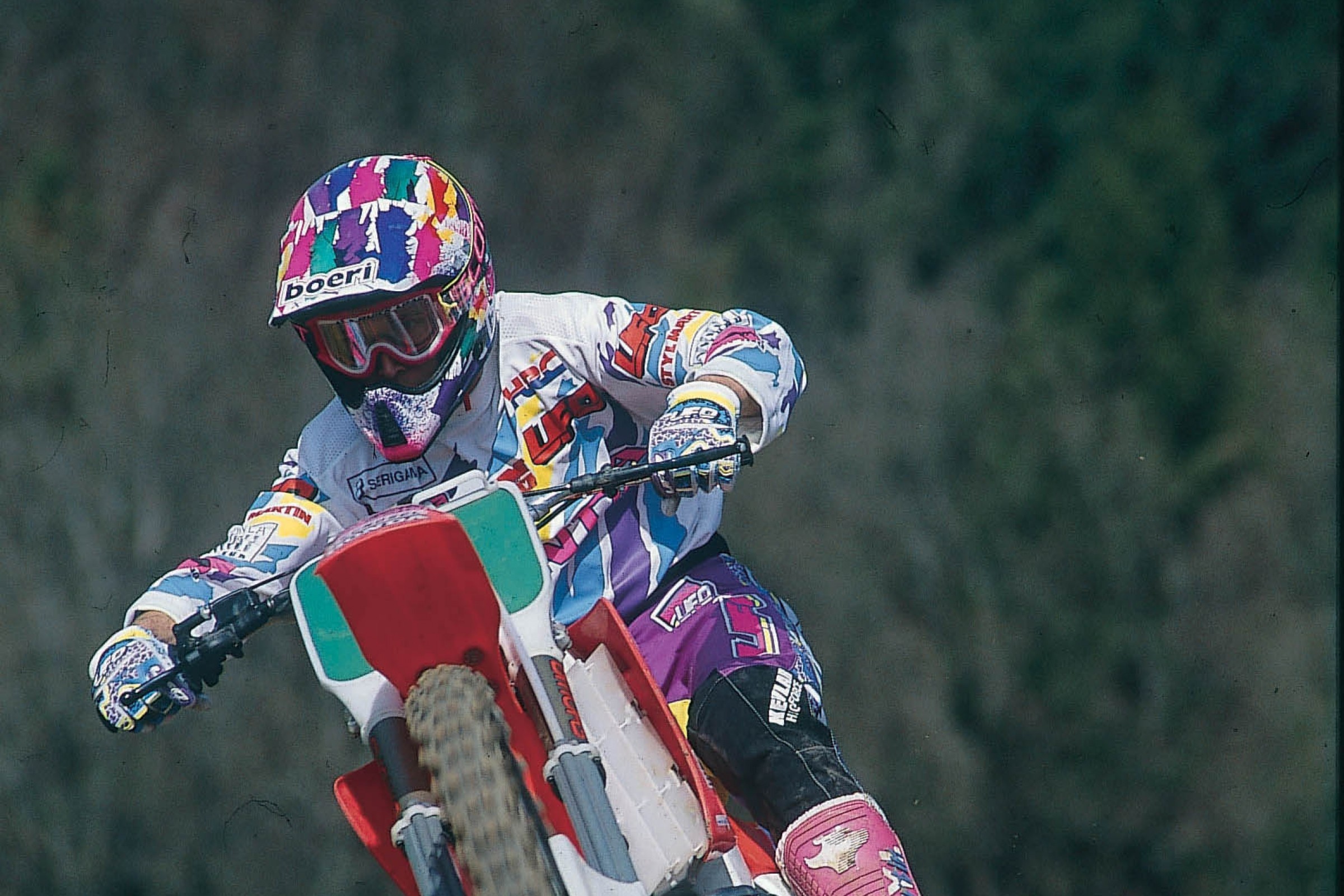 On This Day in Moto April 12

American rider Zach Osborne won the Grand Prix of Turkey during the FIM MX2 Motocross World Championship for Steve Dixon's Yamaha team aboard a YZ250F. It was the first American win in the small-bore division of Grand Prix MX since Mike Brown in 2000, not to mention the first professional win of Osborne's career.

In the premiere MX1 class, another Yamaha rider, Antonio Cairoli, got the win.

A strange new event called the Navy Moto X World Championship was held in Qualcomm Stadium in San Diego, produced by and aired on ESPN. Makita Suzuki rider Ricky Carmichael came out of retirement to participate, but only in the Step-Up competition. RC cleared a remarkable 35 feet, the only rider to get that high in qualifying, but he bounced the landing, crashed, and pulled out of the competition. In the finals of that competition, Matt Buyten topped Ronnie Renner with his own 35-foot high jump, but that was after the organizers made a longer runway for everyone.

In the Moto X race, factory Yamaha rider Broc Hepler, riding a YZ250F (one of the few 250s in the field), took the main event win and the gold helmet that came with it. KTM riders Justin Brayton and Nick Wey were second and third.

The Supermoto winner was Ohio's Mark Burkhart, the former SX racer. The event played in a mostly empty stadium and did not return to the calendar.

Lake Whitney Cycle Park in Texas was the site of a combined 125/250 National, and Texas' own Kent Howerton was the overall winner in the 250 Class aboard his factory Suzuki, avenging his defeat the previous weekend to Bob Hannah at Saddleback. Finishing third was Honda rider Donnie "Holeshot" Hansen.

in the 125 Class, eight out of the first nine finishers hailed from California. The only one who didn't was the winner. Illinois' Mark "Bomber" Barnett kept his dominance going with a third straight win to start his first title defense. Sixteen-year-old Rick Johnson was second, and Team Honda's Johnny O'Mara was third.

How many minicycle racers can you remember popping up on the front page of Cycle News? Jeff Emig was one of the first after winning the 1987 Kawasaki Race of Champions at the NMA World Mini Grand Prix in Las Vegas. Emig swept all three motos against a field that included Buddy Antunez, John Kitsch, Jimmy Gaddis, Junior Jackson, and Brian Swink.

Over in Switzerland, a handful of Americans were chasing after the FIM 250cc Motocross World Championship title, including defending series champion Trampas Parker, now on a Honda, and 125cc World Champion Donny Schmit, who moved up and over from a Suzuki to Michele Rinaldi's Chesterfield Yamaha 250cc juggernaut. Also abroad were Bob Moore, Mike Healey, Micky Dymond, and Bader Manneh. This was the year of the FIM's three-moto format, and three different moto winners emerged: Stefan Everts, Moore, and Parker. But Parker's 2-3-1 were good enough for the overall. His day was highlighted by a third moto one-two by Parker and his Honda teammate Dymond.

At the second night of the Pontiac doubleheader both Kawasaki and Suzuki made it clean weekend sweeps in the 250 and 125 classes, respectively, and with two different riders. After Jeff Ward and Keith Turpin won the previous night's main events, Ron Lechien and Ron Tichenor came out in the Sunday matinee and did the trick again. Kawasaki's Lechien was trailed by factory Suzuki rider George Holland (a career-best second in AMA Supercross) and his older teammate Johnny O'Mara. Wardy finished fourth, but he now had control of the series after Rick Johnson's injury the night before.

In the 125 class Florida's Tichenor was the winner while his teammate Keith Turpin, the previous night's winner, scored second-place. Third went to Michigan's own Todd DeHoop on a Yamaha YZ125.