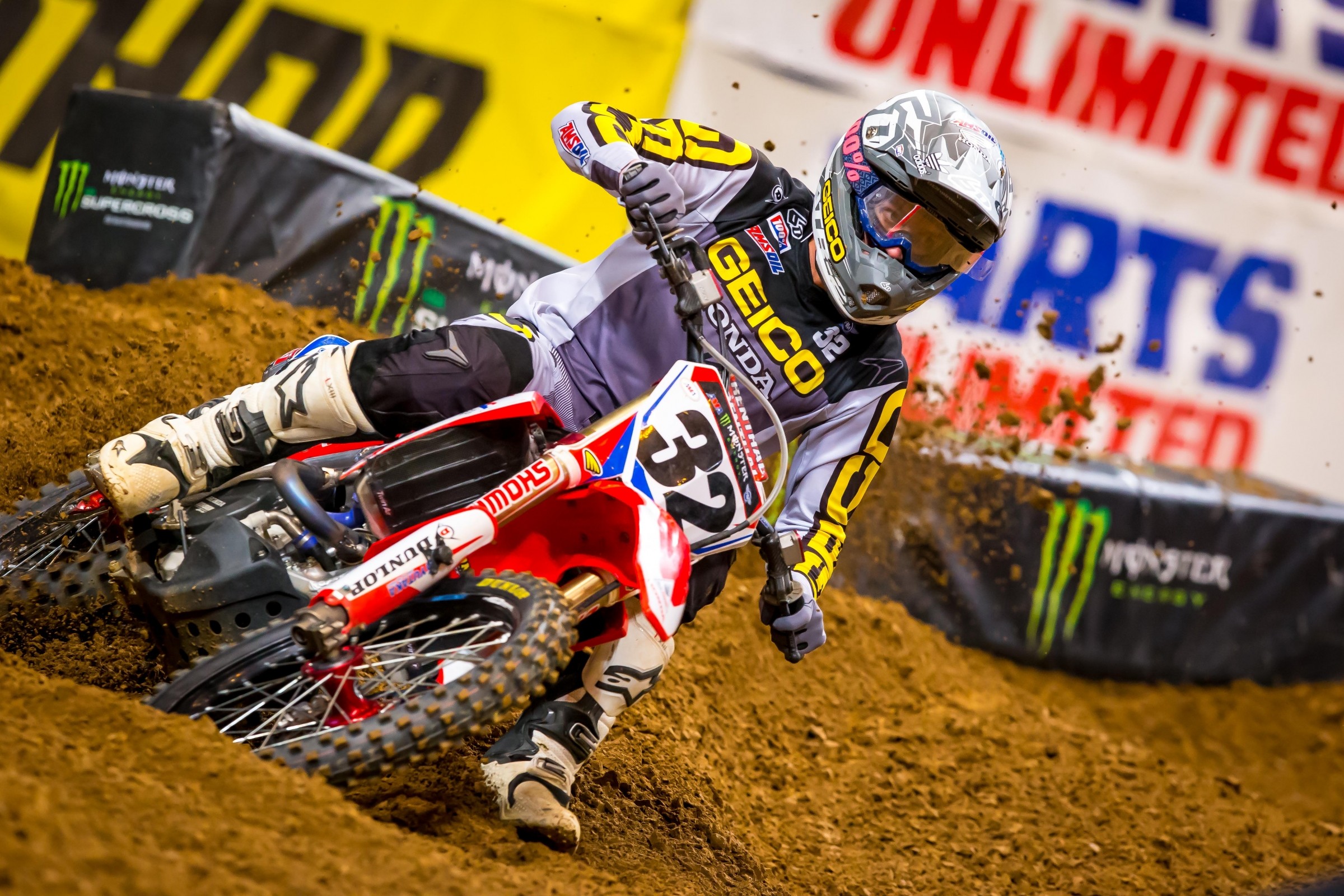 The photo of Justin Brayton below is in the long rhythm section after the start. The main line here was double-double-triple-quad. The first two doubles were very slow and riders had to be patient through them. The next triple was also very important to time exactly right so all of the possible drive could be attained for the big quad into the turn. If you missed the triple short or long by even a few feet, the quad was impossible.

In this photo, Justin is in the air over the triple before the quad. He seat-bounced the triple and looks like he is coming up a little shorter than he wanted. This forward lean and pulling of the handlebars will give him a tiny bit more distance and hopefully still allow him to quad out. Similar to BMX, picking up on the bike can make small differences that make or break the timing in a section. He is gripping with his knees as he pulls up and forward, doing everything he can to get another foot or two. Notice how his feet are also off the pegs. That’s because of his pull upward and also in hopes of the bike flying further. He isn’t in danger of a crash here, more just trying to make sure he is in the exact spot he wants for the upcoming quad.

This photo below of Christian Craig is typical Christian Craig—in that he is doing everything perfectly. He might be the only rider where I can’t seem to find a photo of him in a bad position or using bad technique. He is entering the first rhythm section after the start (same rhythm as Brayton above). There was a small double right out of the corner that riders really didn’t have to respect very much. He is on the inside and might not even make the downside based off of his body language but with a tiny landing, it didn’t matter. The important part was carrying speed through the corner, which is what he’s doing. The reason I chose this photo was to show him standing through the corner and with both feet on the pegs. The key here is that he doesn’t sit down and waste energy, and he also doesn’t want to compress the suspension. By standing, he allows the bike to float more freely through the turn and soak up the jumps. Had he sat through the apex, he would load the suspension, and the subsequent unloading would send him upward. By keeping the suspension free, he can continue forward momentum. Lastly, notice his head is leaning inside toward the direction he wants to go. Lean angle is important without a berm, and with the positive traction St. Louis offered, he knows he can lean hard without fear of the front tire pushing.

Kyle Peters and Zach Osborne are shown below in their heat race battle. Osborne would eventually get by Peters for the win, but as you can see here, he had to work for it. This turn is right after the whoops and followed by an easy double-double. The jumps after the turn are important because that dictates how riders need to approach the turn. If there was a tough triple out of the turn, riders would enter the turn at the beginning of the berm and build speed as they railed around it. That early entry point also adds a lot more distance to cover, though, so it’s not an ideal line in this particular scenario. With the easy jumps to follow, riders were able to shorten up the turn and not concern themselves as much with “setting up” for the next section. They could also pivot lower in the berm knowing they wouldn’t need a lot of speed to clear the next double. Zach is demonstrating that here by entering the turn later in the berm and also pivoting lower. He is “shortening” the track by lessening the distance he has to travel. That shortening is also impeding his momentum, but in this case, he didn’t need much for the double.

This photo of Jordon Smith below shows the commitment that blitzing whoops requires. Jordon is pretty far back on the bike, maybe even a touch further back than many would recommend. His arms are almost at full extension because of that positioning. He is gripping hard with his thighs to keep the bike straight in the edgy St. Louis whoops. Most of the manipulation and input through the whoops is done via the legs. Also, notice his foot position on the pegs. He is able to push against the pegs and gain leverage if the bike does anything unexpected. In short, he is doing everything he can to control the bike and avoid becoming a passenger.

Tyler Bowers is shown below mid-air over the triple. This triple had a left-hand turn immediately following the landing. He is setting up for the turn while still in the air so he can maximize his efficiency. His left leg is already out to help him turn sooner, his finger is on the clutch, and he is in the process of sliding forward to gain leverage on the front end. If he had jumped a tiny bit short or long, he wouldn’t be in this position. He can only set up like this if he nails the jump perfectly, so this is all mid-air decision.