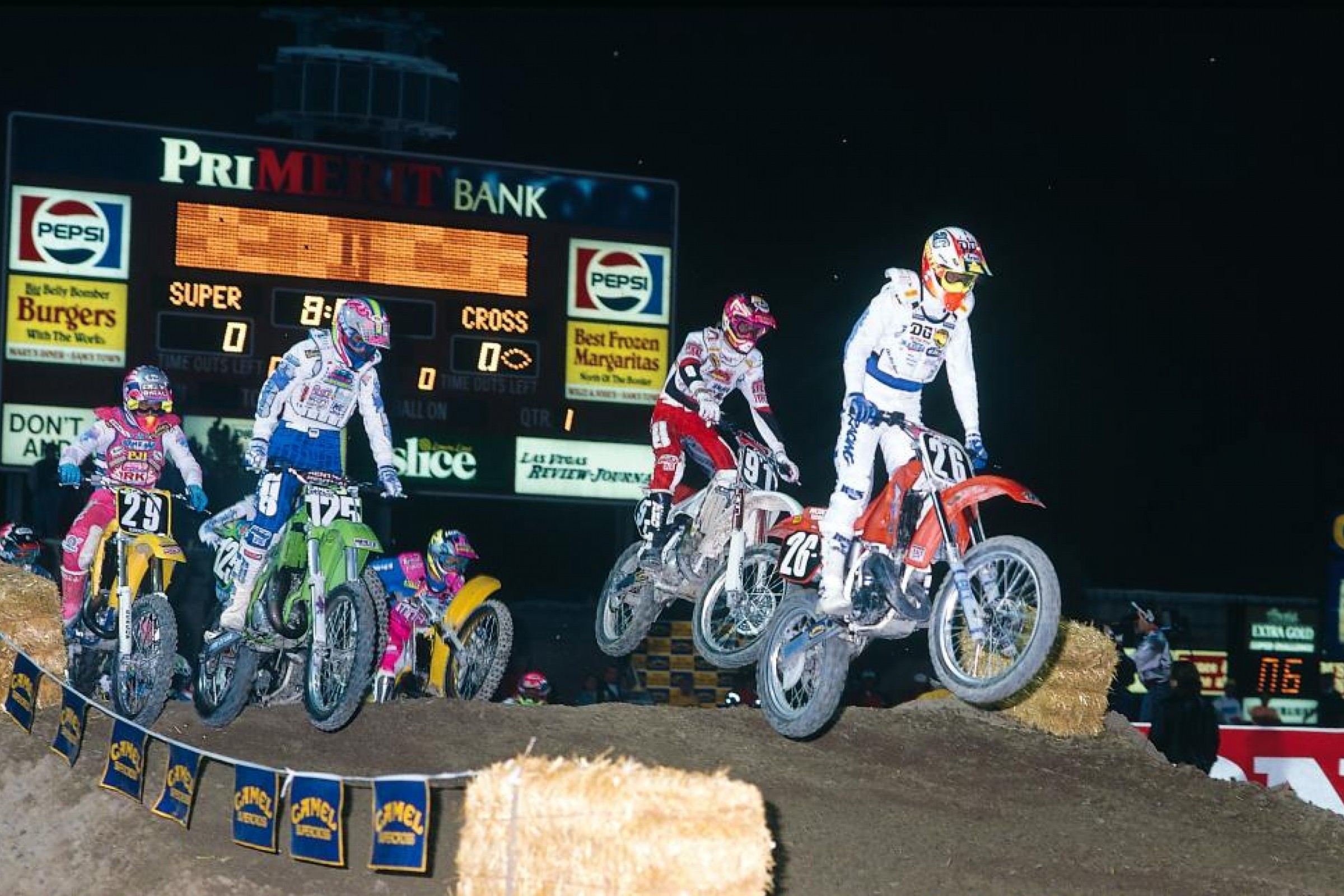 On This Day in Moto March 17

In the first night of the annual Houston Astrodome doubleheader, Bob "Hurricane" Hannah took charge with another win aboard his Keith McCarty-tuned Yamaha. It's his first of four straight wins in the "Eighth Wonder of the World" as the Astrodome proclaims itself. Honda's Marty Tripes was second and Suzuki-mounted Tony DiStefano third.

Monster Energy Kawasaki's Ryan Villopoto started heating up aboard his Mike Williamson-tuned KXF450 with a win at Lucas Oil Stadium. It's his first of four straight wins on the way to a successful title defense of his first AMA Supercross Championship. Finishing what was a career-best second at the time is Honda-mounted Justin Brayton, with JGR Yamaha rider Davi Millsaps third.

In their last-ever epic duel in Monster Energy AMA Supercross, James Stewart holds back Ricky Carmichael in the Orlando Citrus Bowl after 20 close laps. The race marks Carmichael's last-ever AMA Supercross, as he was in "farewell tour" mode and rode six of the early rounds, winning two. Carmichael would return for six rounds of AMA Motocross and win every one of them, then call it a career as the captain of the winning Team USA at the Motocross of Nations at Budds Creek, Maryland.

The Lites class was a crazy night. First, rookie Ryan Dungey got taken out on the first lap by a bike coming the other direction, slamming head on into him and causing a red flag. But Dungey's bike was broken and there's wasn’t enough time to fix it before the restart. The race began without him. Branden Jesseman, riding a Motoworld Yamaha, was also in the crash but did get back up in time for the restart. After a decent start the 2003 East Region Champion worked his way into the lead and got the last win of his career. Yamaha of Troy's Ryan Morais was second and Monster Energy/Pro Circuit Kawasaki's Darcy Lange third after KTM's Mike Alessi crashed out of second in the last turn.

In the midst of his epic 13-race winning streak to close out the 2001 AMA Supercross Championship, Ricky Carmichael won his seventh main event on the trot at the Metrodome in Minneapolis. Defending champion Jeremy McGrath places second with Mike LaRocco third.

In the 125 Class Suzuki's Travis Pastrana wins his third in a row to extend his points lead. Yamaha of Troy's Nick Wey was second, Pro Circuit Kawasaki's Mike Brown third.