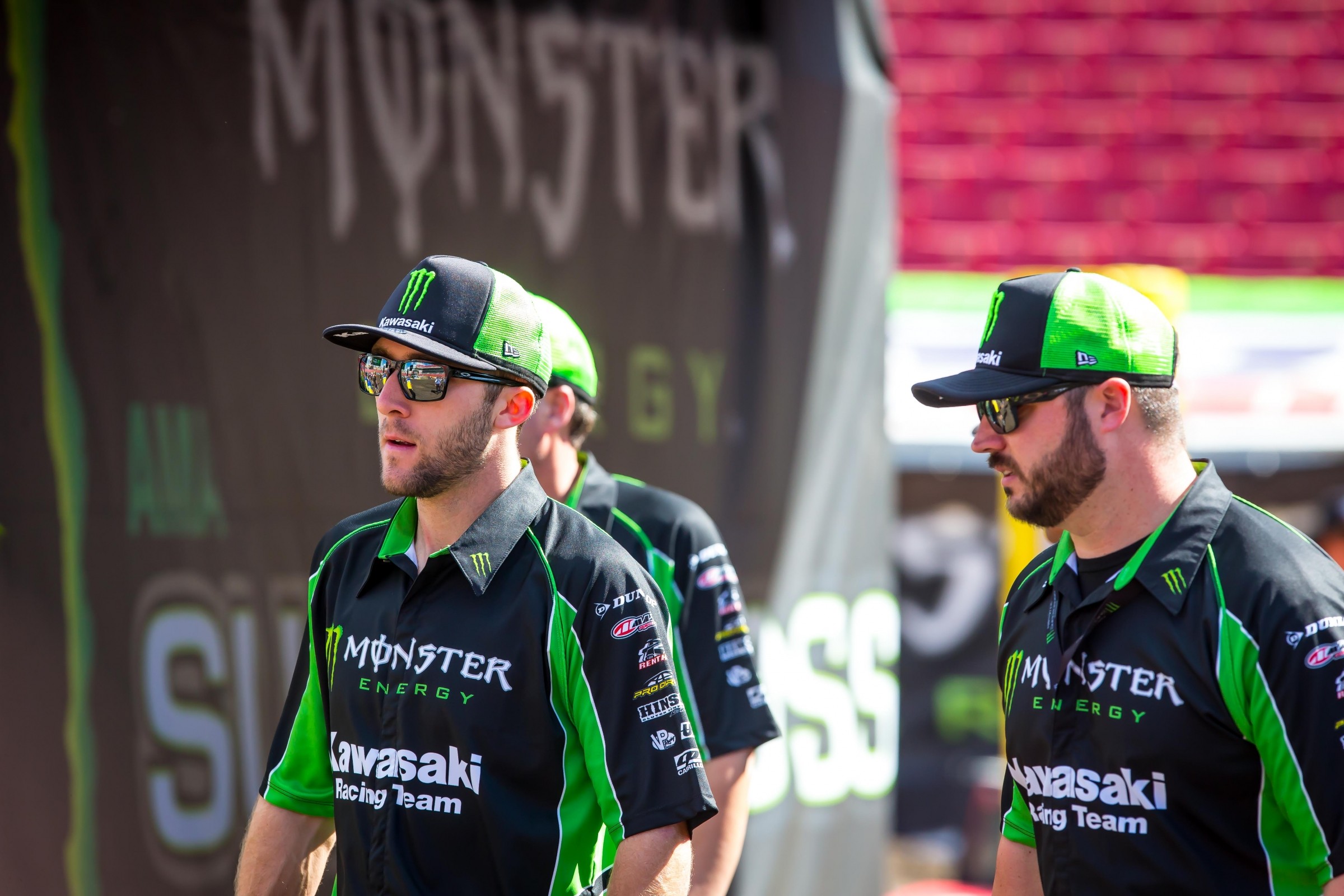 Eli Tomac and Jason Anderson both have a couple of mini-streaks going, and depending on how things shake out, they could both continue or both end in Atlanta. So far this season Anderson hasn’t gone more than two races without winning, while Tomac hasn’t won more than twice in a row. Tomac would surely like to break his own streak by making it three in a row this Saturday, and Anderson would like to keep his going by getting on top of the box. If he does, he’ll also tie Tomac in the most wins category with four. —Aaron Hansel

Austin Forkner’s supercross win column is no longer empty after his brilliant performance last week in Tampa. The Monster Energy/Pro Circuit Kawasaki rider was fantastic in the 250SX main event, leading 19 of 20 laps and showing great poise late in the race when under heavy pressure from Dylan Ferrandis. It’s been said that you have to learn how to win races before you can win a championship, and if that’s the case, Forkner is in a great position—he’s only five points back of Zach Osborne now. We’ll see if he can keep his title hopes healthy in Atlanta. —Hansel

We haven’t seen Justin Hill ride a 450 very many times, but when we have, he’s been fantastic. The first was at the Monster Energy Cup in 2014, when he took second in both of the first two races, shadowing Trey Canard most of the way. The second was last week in Tampa, where he beat Marvin Musquin straight up in his heat race, made quick work of Tomac in the main, and went down while trying to make a move on Musquin for the lead. It’s unfortunate that he crashed, but even so, the fact that he even had a very real shot at winning his first ever 450SX race is astounding. Will the magic continue in Atlanta? —Hansel

Justin Brayton found himself tied in the points before this season (he was tied for fifth with Blake Baggett after San Diego), and coming into Atlanta, he’s tied up yet again. This time it’s with Weston Peick for fourth. Both riders have been really solid this year, and judging by past races, it wouldn’t be very surprising to see them battling inside the top five. If that happens, things could get good! —Hansel

It almost seems unfair to describe Zach Osborne’s ride in Atlanta as unimpressive. After all, the dude was on the podium and retained the points lead—that’s the kind of stuff most guys dream about. But Osborne has been so darn good lately that it was little surprising to see him let a legitimate shot at the win slip away and later drop a spot to Ferrandis. Strangely enough, afterward Osborne said he actually felt better in Tampa than in Arlington, where he took the win. It’ll be interesting to see how he feels—and what happens—this weekend. —Hansel

Depending on the rider, qualifying can hold little relevance. Some riders are just “racers” and couldn’t care less where they sit entering the night show. That obviously changes with the Triple Crown format, as the top 18 from each class transfer directly to the night show, with the last four coming from the LCQs, which are held during the day. We’ll see who can capitalize on this. —Stallo

GEICO Honda’s Christian Craig is no stranger to filling in for Honda HRC. This weekend will mark the fourth time he’s done it—including two 450SX races and the entire Lucas Oil Pro Motocross Championship in 2017. He’s familiar with the team and the bike, but going from the 250 to the 450 on short notice is no easy task—unless your name is Justin Hill, apparently. We’ll see how Craig does this weekend on the big bike. —Stallo

After missing the opening two rounds due to a concussion, Rockstar Energy Husqvarna rookie Michael Mosiman will make his Monster Energy AMA Supercross debut this Saturday. Mosiman raced Lucas Oil Pro Motocross last year but missed much of the season due to a shoulder injury, so there isn’t a large sample size to judge from. He’s already spotted the field two races, which can be tough, but the good news is if he can set a fast lap, he’s in. The bad news: his first race will count for points. That’s a tough situation. —Stallo

The Georgia Dome had a rich history in supercross. It witnessed some of the greatest races in the history of the sport. We actually listed some of them last year, so check it out. Anyway, the Mercedes Benz Dome looks amazing and hopefully will pick up where the Georgia Dome left off. —Stallo