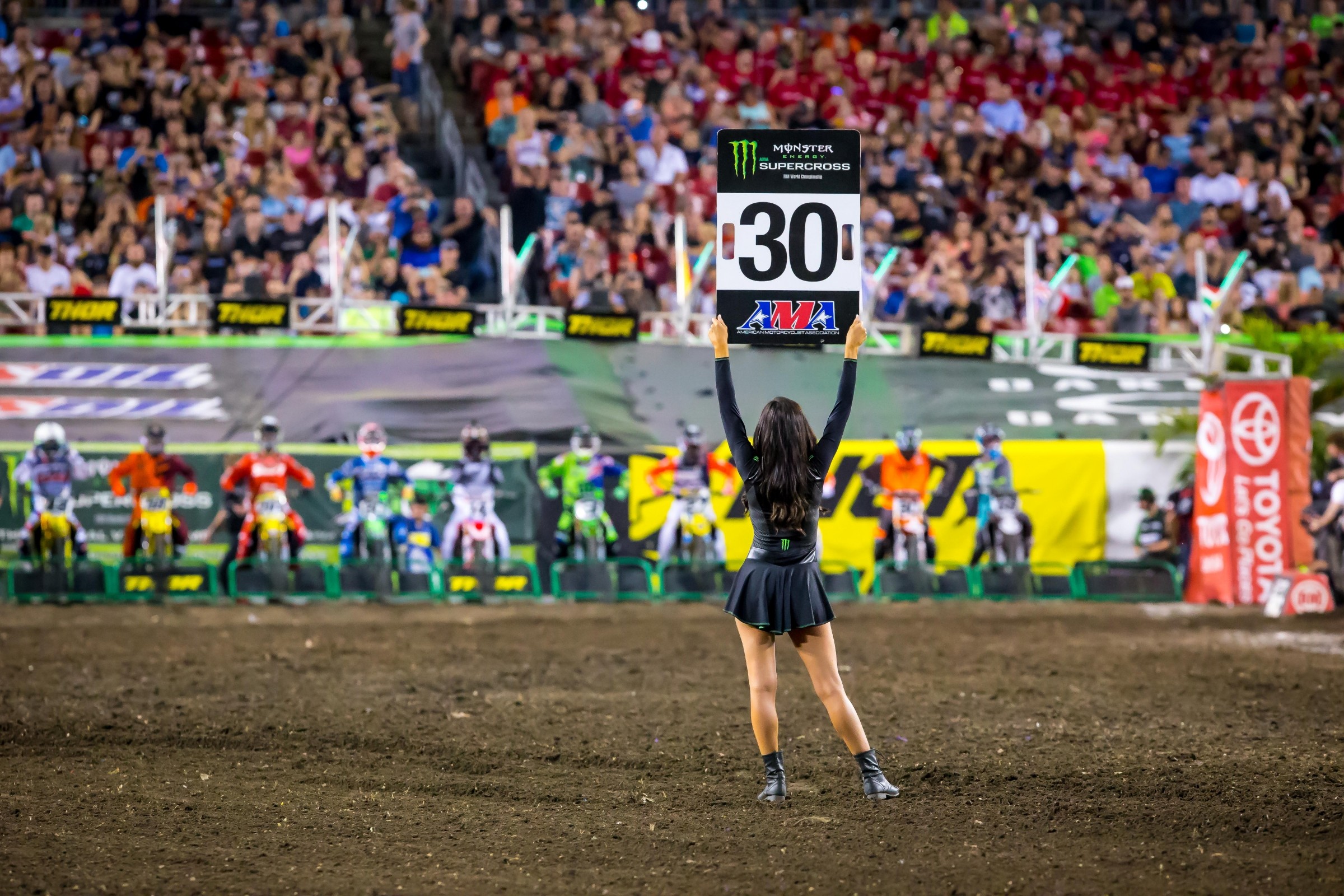 Supercross' return to Tampa after almost 20 years gave us one of the most exciting tracks of the year. There was a lengthy sand section that gave riders trouble all day, a long rhythm section that riders all attacked differently, and Feld Motorsports even dressed up the track with some small palm tress. Tampa had it all.

The great track gave us some great racing as Austin Forkner and Dylan Ferrandis battled down to the wire to get their first 250SX win. Forkner came out on top and now sits second in the points standings, five behind Zach Osborne.

In 450SX, Marvin Musquin and Eli Tomac were up front again and had a yo-yo style battle to start the race. Eventually Tomac found his groove and pulled away, but Musquin did put up a fight.

The first half of the 450 main event was one of the most exciting so far this year. Cooper Webb, Marvin Musquin, Eli Tomac and Justin Hill traded spots up front. Tomac made mistakes early which allowed Musquin and Hill to put a small gap on him. Eventually Tomac settled in and worked his way back up front.

After the race Tomac said, "I just wasn’t riding the way I was riding later in the main there and got shuffled back. I got passed once and then twice. Then I was like, holy crap, what are you doing now? So, once Hill got by me, that’s when I really got my groove. Once he was able to get past me, then I got my flow there. Then after that we just slowly started chipping away, getting close to the lead there. I had that inside line in my bag from the heat race. That’s where I was able to get Marv the first time. The second time I was able to make it stick"

Below you can see Tomac's worst two laps came on laps four and five where he lost about a second to Musquin each lap. They both struggled to maintain super consistent lap times, which was most likely due to the tricky sand section and various slick spots such as the section that crossed back across the start straight.

Tomac's big advantage started on lap 14, as from there he outpaced Musquin all the way to the finish.

Check out their lap times below.

Forkner vs Ferrandis vs Osborne

The 250 class gave us another awesome race as Austin Forkner and Dylan Ferrandis finished within a second of each other. Zach Osborne had the leaders in sight for a large part of the race as well.

I plotted out all three riders' lap times below. Ferrandis put in the most consistent fast times, but got a slower start than Forkner and Osborne. Forkner was able to get into the lead early and turned in several laps in the 49 second range, but also flirted with the 51 second line a few times which allowed Ferrandis to close in. Osborne lost precious time on laps 12 and 13, and then again at the end of the race on laps 19 and 20.

At the post-race press conference Osborne attributed his struggles to the slick nature of the track. "In the beginning I felt pretty solid, and then maybe like halfway through I had a few mistakes and then Dylan got me and I did struggle a little bit. It’s just not quite my cup of tea when it’s a little bit slicker. "

Ferrandis, who never really got up to race pace last weekend following that wild first-turn crash, admitted he was "running out of oxygen" at times while chasing Forkner. He was very fast at mid race, but laps 14, 15 and 18 were costly (lappers could have been a factor, too). Credit to him for digging in for one last heater on lap 19, which got him back to Forkner's rear wheel. Austin held him off for the win--both riders admitted they were pretty tired. That's good racing!

The sand section was probably the most talked about section of the Tampa track before the race weekend, but the long rhythm section after the start straight brought just as much excitement because the three fastest 450 riders (Musquin, Tomac, and Hill) all had different ways of attacking the section.

I decided to time the footage from the main event to see which line was the fastest. Since going wide or staying tight in the corner before the rhythm was a huge part of the section I decided to start the timer at a red and black tough block at the entrance to the corner, and then stopped the timer once the rider's back wheel cleared the final jump.

Hill's big quad-quad line was the fastest, but it wasn't that much faster than Tomac's line of staying tight through the corner and tripling onto the tabletop in the middle of the section. Musquin's line was by far the slowest, and it was also the most used line by the 450 class. Take a look at each rider's time below.

Finally, Chad Reed made history in Tampa. He became the rider with the most premier class main event starts in history, clearing Mike LaRocco's record of 227 starts. Although he wasn't able to finish his record main event due to a bike problem, he was on pace to put in his best main event finish of the year.

I'm only 24 years old and didn't start really watching supercross until 2004, so Reed has been a major player pretty much every single year since I started watching the races. Having watched most of his races I was curious to see the breakdown of each season to see how he got this record.

Once he jumped up to the 450 class full-time in 2003 he put in seven straight seasons of lining up for each main event (Feld switched to a 17 race format in 2008) even after crashes like this one. Seasons like these are why Ralph Shaheen so often used the word "Gritty" when describing Chad.

We talked to Reed last week and he was clear that he didn't line up this year just to break the record as he feels he can still be competitive when healthy. Let's see if he can get the next "old guy" record for oldest supercross win later this year.