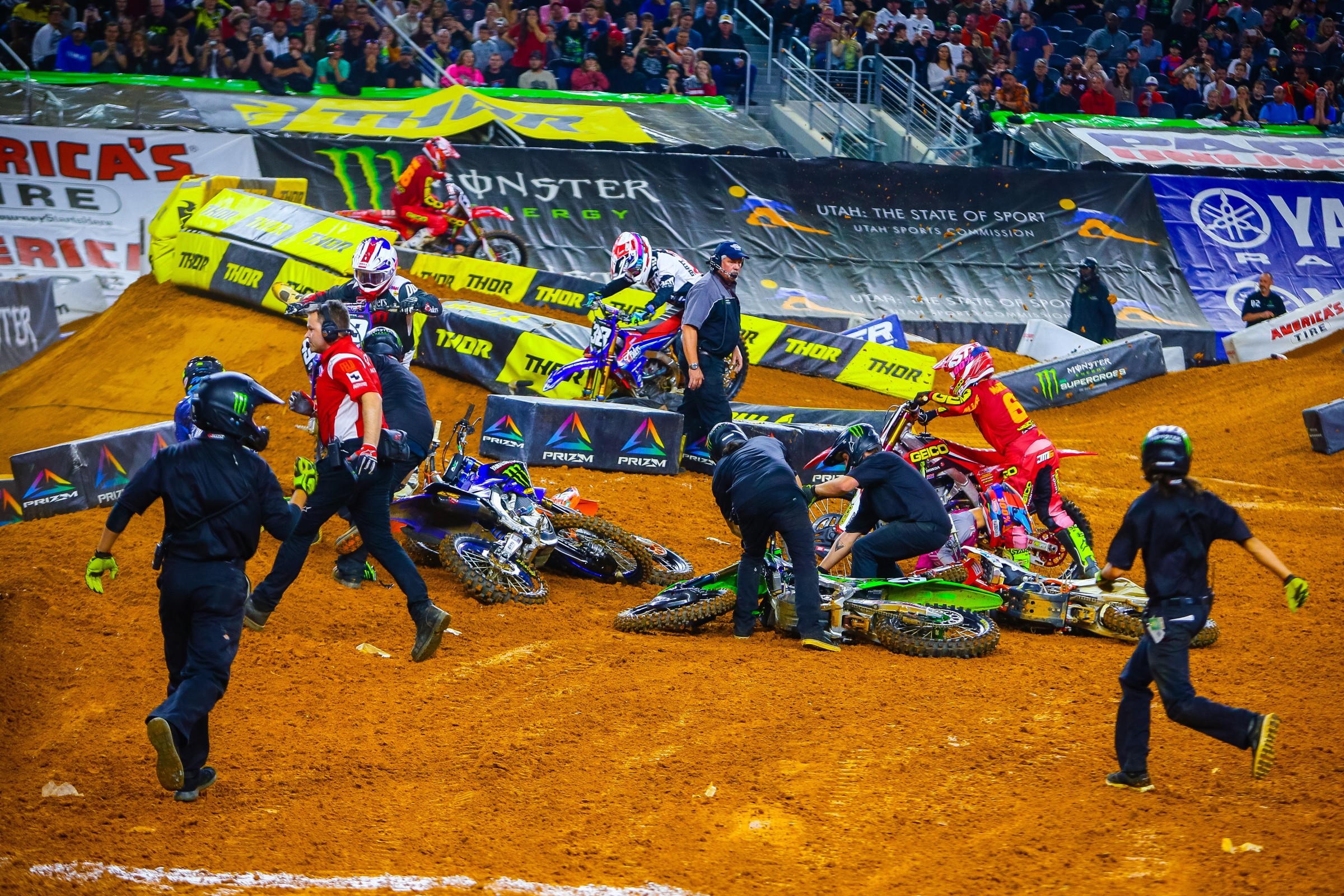 250 Supercross racing is all kinds of crazy. I don’t know if it’s the lack of experience, their youthful exuberance, or just the aggressiveness that smaller engines entice, but that class is a madhouse. Seemingly every time the gate dropped for a 250 race, there was some sort of chaotic situation unfolding. Let’s take a look at a few of these.

In the first 250 heat race, Jon Ames and Chaz Braden basically collided head-on during the final lap. They weren’t even racing near each other, and that’s what made the situation even worse. Ames was in a desperate battle with Anthony Rodriguez for the final transfer spot. In the final turn, Rodriguez pushed Ames wide and sent him through the berm and onto the next lane, which happened to be the start straight. During racing laps, riders rode down the start straight backwards, so as Ames careened into that lane, he was facing oncoming traffic. Chaz Braden was racing along further in the pack, and on the fastest section of the track, he had to feel sheer panic as he saw Ames headed right for him. Both of these riders tried avoid impact, but it was one of those weird “I’m going right and you go right, wait, now you’re going left so I will go left, NOOOO don’t go right!!!” and WHAMMY, they are smashed into a heap. It was one of the hardest impacts I have ever seen at a supercross race, and even with the injuries sustained, an incident that could have been catastrophic.

Most of this was just an unfortunate series of events that turned ugly in a big hurry. With the contact in the corner, Ames was destined to be over the berm and into uncharted territory. The only avoidable aspect of this I could really deduce was as Ames went into the next lane, I think there was an opportunity to slow down or evade traffic. It appeared that in the frantic intensity of the last turn pass, he was still in “race” mode and not in “avoiding disaster” mode. Had he immediately slowed or gotten out of the race line, this might have had a much better ending. Instead, that extra momentum added a lot more energy to the crash and shortened the time both riders had to react. It was a bum deal for both sides and not something I care to see happen again.

Another wild scene was the first turn of the main event. Martin Davalos was rear-ended by Jordon Smith and Josh Osby, and that trio sent the rest of the field tumbling. Many of the title contenders found themselves on the ground, and for Davalos, things could have been much worse. As Osby and Smith entered the first turn, they came in way too hot. I think they were a bit tangled, which, if so, would help explain why they pushed so deep into the apex of the turn. It looked to me as if Osby pushed too long and bumped Jordon as he was trying to brake. That unsettled both of them and kept their momentum flowing forward. Just to their right, Zach Osborne had already conceded that he was beat to the turn and was hard on the brakes. As they ran up into the rear of Davalos, the metaphorical snowball began to roll downhill. When on the inside like this, riders need situational awareness of their speed in comparison with those directly in front of them. They have to be able to respond to those with a wheel ahead of them when it bends left. As Davalos pivoted and wanted to accelerate back to the left, Osby and Smith were both completely unprepared to turn. When everyone around them was braking and preparing to file left, they simply weren’t.

Osby and Smith were in a position where they could solely dictate the outward flow, so they have to respect the situation around them. Being on the inside carries a bit of responsibility here. If someone on the inside wanted to leave the throttle on as everyone turns and annihilate half of the field, they could do so. They have the direct line to take everyone down. That’s why the inside rider usually brakes early and dives inside. They have the benefit of controlling their own braking point and can utilize the inside space created as everyone drifts wide. If things go haywire and riders tangle or miscalculate that inside angle, though, the ripple effect of all that momentum can send riders flying.

That’s exactly what we saw in Arlington. Osby and Smith should have been much more aware of their speed and their inability to turn at the apex point. They were too concerned with each other and not concerned enough with the rest of the pack around them. Osborne had to be thinking, “Where are you guys going?!” as they continued to barrel past him into the ensuing war zone. It was a huge crash with huge title implications and completely avoidable. Everyone will have their own opinion as to whether this was simply youthful exuberance, situational inexperience, or just racing. I doubt that Dylan Ferrandis, Anthony Rodriguez, Davalos, Luke Renzland, or anyone else in that first turn cares, though.

This type of stuff seems to be the norm in the 250 class. I was barely back into my seat when a crash or takeout would have me jumping out of it again. Wildly entertaining? Yes. Anything I would ever want to involve myself in?  No. The kids might indeed be alright, but I could settle for one degree less on the death-defying incidents.