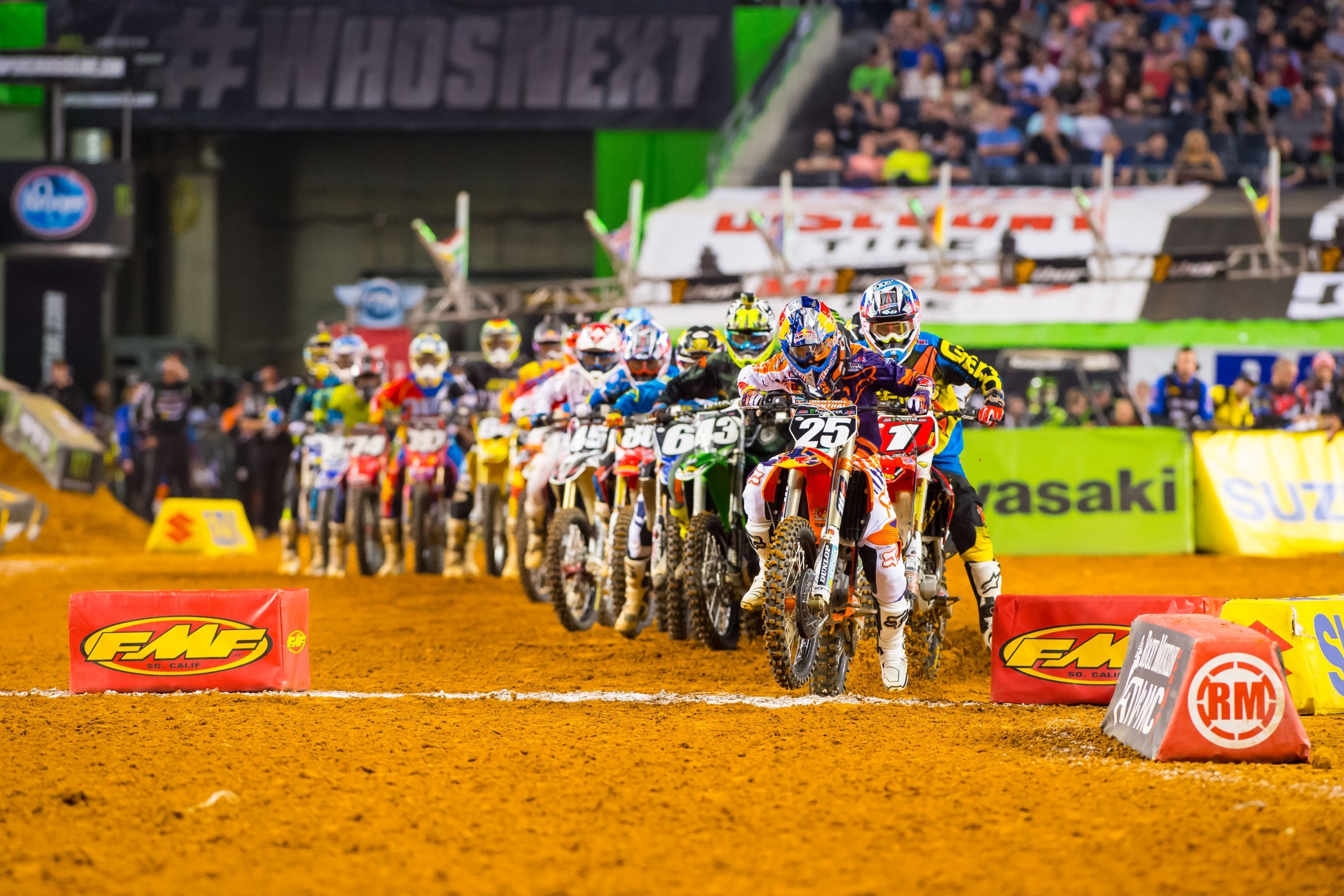 On This Day in Moto February 14

Kawasaki's Ron Lechien won the second night of the Seattle Kingdome doubleheader while wearing a one-way radio system that allowed his team manager Roy Turner to talk to him. His teammate Jeff Ward also used a radio and finished second. The React Racing Radios immediately caught the ire of others, with Honda’s Rick Johnson saying of his title rival Ward, “When he’s got that radio in his helmet, he’s kind of got eyes in the back of his head. He wasn’t cutting me off or anything, but he kind of just knew if I took different lines.”

Ward said, “Roy doesn’t even talk to me unless there’s a rider that goes down. He can’t tell me where (Johnson) is going or anything like that, it’s just too much to think about. I can hear him (RJ) better than he (Roy) can tell me. It’s more for safety reasons, and before the race he was talking to me, telling me the lines (125cc winner Jeff) Matiasevich was using, and that helped out a lot.”

Regardless, radio communications were soon banned, though at the '88 Motocross des Nations Team USA (which included Lechien and Ward) caused an uproar when they went out with radios on their helmets. That led the "second" French team from the Principality of Andorra to duct-tape Gauloises cigarettes boxes, wrapped in electrical tape to look like radios, onto their helmets as a way to make fun of the Americans' radios. Team USA won; Andorra failed to qualify.

And that same night it was announced that Roy Janson was named motocross manager for the AMA’s professional racing department. Janson, then 37 years old, had served as a land use coordinator for the AMA’s government relations department since 1981, while also serving as president of the All-Terrain Vehicle Association (AATVA).

At the GFI Winter Series in Perris, California, a bunch of fast guys showed up to compete, and the overall winner in the 250 Pro class was two-time FIM World Champion Donny Schmit on his Chesterfield Yamaha. Schmit topped Craig Decker and Mike Chamberlain in the three-moto format. Fellow GP riders Bobby Moore and Mike Healey were also there, with Healey finishing fourth.

And the Pee Wee First Timer class was won by a very young Mike Alessi.

And here are some 250SX highlights:

San Manuel Yamaha’s James Stewart won his sixth AMA Supercross in a row, this one coming in San Diego. And for the sixth race in a row, Suzuki’s Chad Reed finished second. Because of Stewart’s disastrous first race in Anaheim, Stewart had only just reached Reed on the points table, tying him for the lead. Honda-mounted Andrew Short ended up third.

At Houston’s Reliant Stadium, Chad Reed raced his Yamaha YZ250 to the win in the premier class while Kawasaki’s James Stewart topped the 125 class.

Michael Goodwin, charged in the 1988 shooting deaths of his former business partner Mickey Thompson and his wife, Trudie, was denied bail by a judge in Pasadena. Goodwin had been in jail since October 2004 and charged with two counts of murder and the special circumstance allegations of lying in wait and multiple murder.