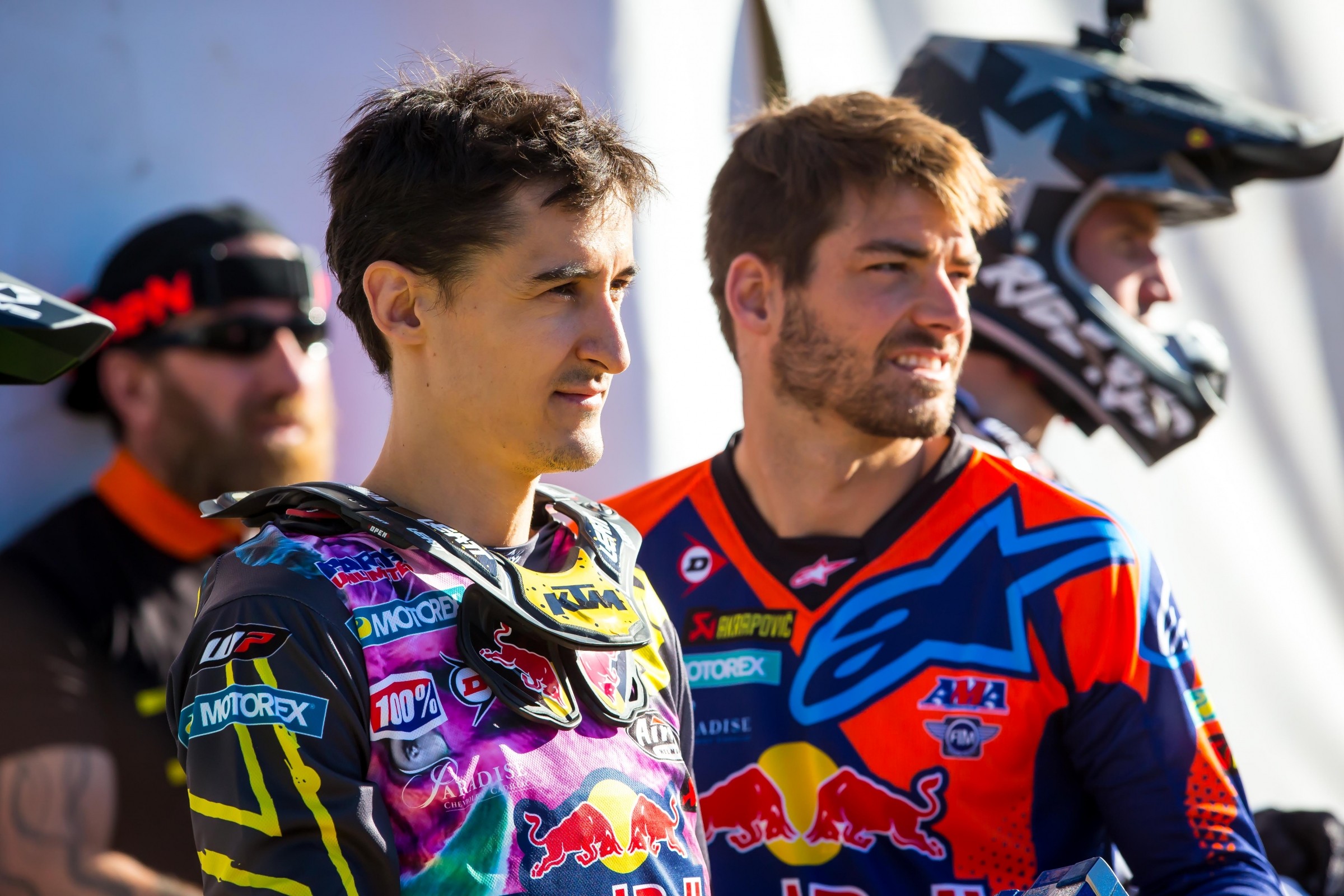 3 on 3 Questions from Oakland

Great racing in Oakland! Our regular analysts David Pingree and Ryan Sipes were busy this week (Ping on the fireman front and Sipes has a brand-new baby!) so we grabbed two favorites to help this week. Justin Brayton was actually in the race in Oakland, so he knows what’s going on. Denny Stephenson is the 1990 125 East Region Supercross Champion-turned-current SX superfan. We also used our man Jason Thomas, who has been more supercross main events than most people.

1. On a demanding track like Oakland, how can you think about planning moves and making line changes while also negotiating the rest of the track? Are these guys going through the whoops while also thinking about the line they’re going to use in the corner and the rhythm that comes next?

Jason Thomas: A lot of this is planned on the hot lap before the race, but, of course, some mid-race changes have to be sorted on the fly. Tracks like this can show who is staying mentally sharp during the main event and who isn't. It can be very difficult to not lock into a line and continue to go there even after that line has lost its effectiveness. Ricky Carmichael was really great about changing lines throughout the race. Riders think about all kinds of things during the main event, so they should be continually evaluating their lines.

Justin Brayton: On a track like Oakland, you have to plan your move two or three sections ahead of time, sometimes even a lap ahead. Barring a big mistake from the rider in front of you (which happened a lot) the track was fairly tough to pass on. So, you had to pick a spot on the track you felt you were better and try to make it happen.

Denny Stephenson: Man, that Oakland track looked gnarly! The most difficult parts, it appeared, weren’t necessarily the rutted jump faces, but actually the rut down in the transitions. It's much easier to plan your lines when you get ample time to see the ruts. When you're in the air and trying to pin point what rut to land in, for me, that just amplifies the difficulty and mental wear throughout the main.

As for the whoops, most of the time you're searching for the least hammered and freshest path you can find with no real regards as to where it leads into the next corner, especially if they're a considerably long set. The time you can make up in whoop has the most value, so worrying about getting into and through the corner after them is kind of an afterthought.

2. The riders never say they get tired, But do you think Ken Roczen and Jason Anderson were gassed at the end of that one? When you case a jump or make a mistake, what kind of physical toll does it take?

JT: There is a huge difference between being tired and being too tired to keep the pace. Everyone is some variation of tired after every race. Even in timed qualifying, riders are winded after their sprint lap. Look at how hard riders are breathing even after their heat races. For the main events, they are definitely tired, but maybe more from overall physical exertion than just the heart rate/breathing from a shorter race. Finding a rhythm in the longer races is critical. That's what makes races like Oakland so tough. The track changes, so it’s difficult to execute clean, consistent laps like riders do all week long. Every time a rider cases a jump or gets out of that rhythm, it definitely upsets their plan. This track requires more energy, strength, and mental acuity. Roczen, Blake Baggett and Anderson were still all able to push at the end of the race so they wouldn't claim to be "tired," but they were definitely all feeling fatigue on some level. They are just fit enough to maintain their pace even when feeling that fatigue.

Brayton: I think those guys were so focused on winning the race that in the heat of battle, they weren't thinking about being tired physically. It was more mentally taxing to hit your lines correctly and try to minimize your mistakes. Actually, this was more of a precision track being that the track, it wasn’t as intense as, say, the Glendale track from last week. I bet their heart rates weren't as high as, say, they were there. But in saying that, it's still supercross, and it's gnarly! I'm sure they were both feeling it at the end. They went all-in to win that race, and a battle like that always spikes your heart rate.

Stephenson: I don't know about those guys, but I was furiously texting, yelling at the TV and jumping and running around through most of that 450 main and I, personally, was exhausted! Seriously though, Ken hasn't had a heart rate spike like that in over a year. You can't replicate that kind of experience and pressure at home on the practice track. It's impossible. We just know how badly the #94 wanted that win. I was going to say "needed" as well, but I think his confidence is still high and he continues to learn with each week. Either way, he was no doubt gassed with a side of arm pump. Hombre [Anderson], on the other hand, I think, would have been good for another five laps. He was winded, no doubt, but he knew all the pressure was on Roczen. And that just comes from the completely different sets of circumstances between the two entering this season.

3. What’s your take on the Justin Barcia/Eli Tomac and Anderson/Marvin Musquin passes?

JT: For Barcia and Tomac, this could have been avoided, I think. It wasn't the most egregious pass I have ever seen, but there was contact and Tomac was left lying in the dirt. Barcia's reputation doesn't help him in these situations. He has had so many incidents over the years that I immediately want to accuse him of another dirty move, even though this one was borderline in my book. I don't think it was worthy of anything more than a raised eyebrow, but I am sure if you’re a Tomac fan or in his camp, you would feel differently.

Anderson and Marvin is a much more complex situation. They are both trained by the same man, Aldon Baker, and are supposed to be working together in some sort of capacity. They race for the same umbrella organization with KTM and Husky, so they certainly want to keep some synergy working in a positive direction. For Anderson to cross the line and put Marvin down will most likely result in some uncomfortable conversation and a bit of tension this week. Marvin even made mention that he will have to even the score next time around. For the points leader, it's normal to have a target on your back. When it's your training buddy who is leveling the aim, though, that's bad juju. I'm ALL IN on championship drama, especially when it's playing out on live television. Bring on the take-outs!

Brayton: No comment. I'm racing all of those guys this weekend!

Stephenson: You know I love this kind of shit! I read earlier this week how JT described Barcia’s move on the #3 [Tomac] as a "torpedo." So, I went and googled the definition of such. Webster's defines a torpedo as a cigar-shaped self-propelled underwater missile designed to be fired from a ship or submarine or dropped into the water from an aircraft and to explode on reaching a target. Man, there was no explosion upon impact, and that sure as hell was no torpedo move! Bam Bam basically just startled the beejeezus out of Eli. I watched it a dozen times, and when Eli all of a sudden notices Justin coming up the inside, he flinches, his feet come the pegs, he loses his balance and falls down across the rear of the #51. Not torpedoed. Startled like someone who's about to get carjacked at 21st & Ames? Yes.

Now, Jason was a little more aggressive. He knows Musquin goes through whoops like he's picking out fresh produce at the grocery store, so he knew a half a lap earlier where he was gonna pass him. He chopped the inside right by the Tuff Block, took aim at a point in the bowl, and made this decision: "I'm getting there first, and if ol’ Marv doesn't realize I'm coming, that's not my problem." There wasn't violent contact and was pretty much a textbook block pass. Error on the #25, I say. He had to know what was coming after going through those whoops at KTM Jr. Challenge speed. My opinion is that Anderson knows he's in Musquin’s head, so why not put a stamp on that letter? Speaking of mail, I sent over a couple nineties arenacross Dash 4 Cash plaques to Bam and Hombre in appreciation of their aggressive moves. Somewhere in Pennsylvania, Mike Jones just smiled and chuckled!