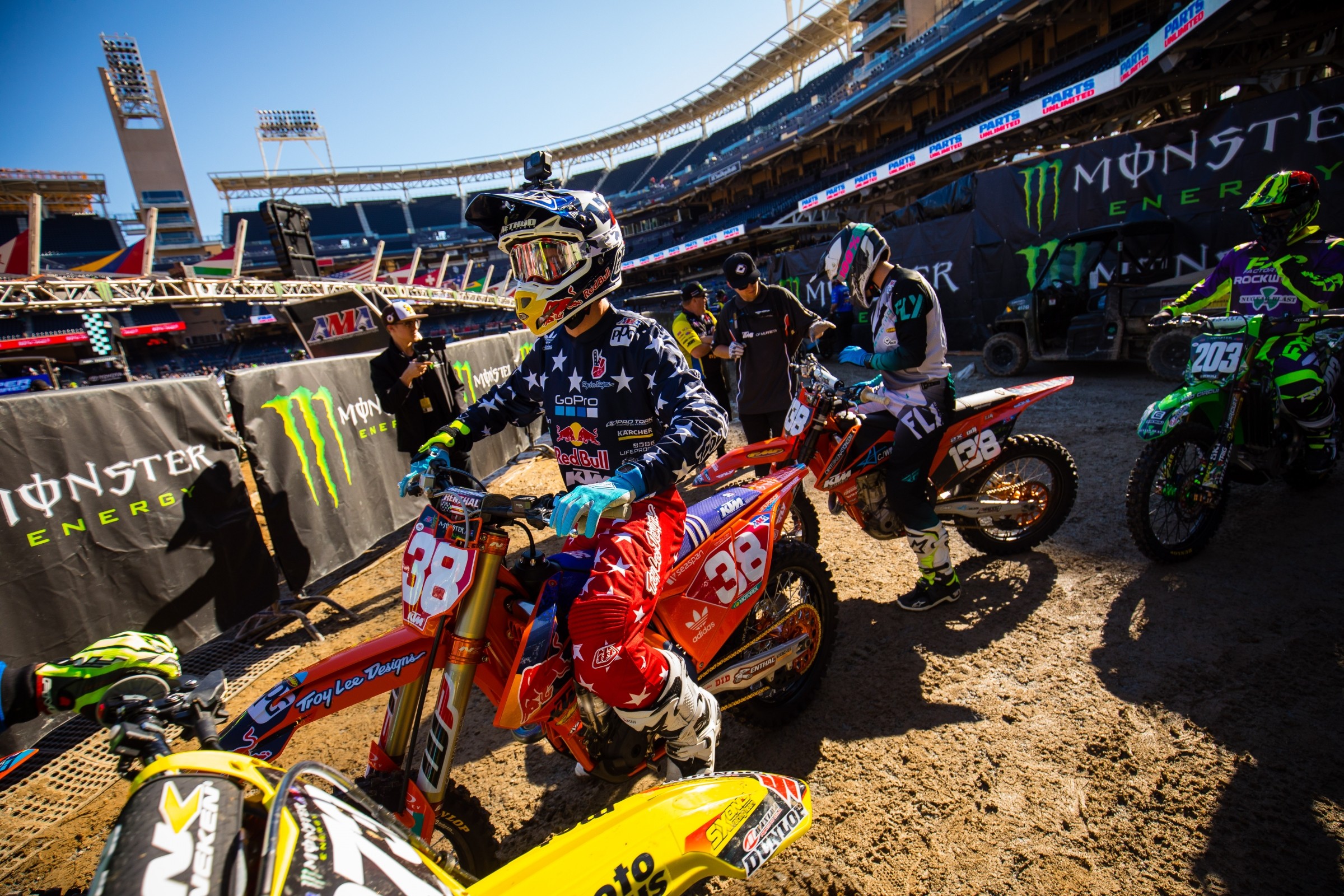 Following San Diego, the 250SX West Region will go on break for more than a month before the series resumes in Indianapolis for an East/West Showdown round on March 24. As if going on a month-long break wasn’t hard enough, picking back up in an East/West round, in which East riders will be coming off five consecutive races, will certainly be challenging. This weekend will be vital for riders to get as many points as possible before heading into a long layoff. —Chase Stallo

Ken Roczen has been thisclose twice this season to picking up his first win in over a year. Roczen led 13 of 23 laps in Houston before giving up the lead late to Jason Anderson. Last weekend he led 12 of 24 laps before giving up the lead on the final lap, once again to Anderson. “I was really bummed because we worked so hard just to pretty much give away the win on the last half of a lap,” Roczen said after Oakland. Roczen is primed to seal the deal soon; we’ll see if he can do it this weekend. —Stallo

Shane McElrath’s championship hopes took a huge hit last weekend in Oakland, as a mistake-filled 15th-place finish left him 19 points behind leader Aaron Plessinger. “I’m not real sure how everything is, but even afterwards, I felt good on the bike. Just one of those nights where you get as much as you can and you move on,” he told Racer X following the race. He’ll need some help in the championship chase, but a win would go a long way this weekend. —Stallo

Like Oakland, San Diego will take place in a baseball stadium. Feld moved the event downtown a few years ago to Petco Park, home of the San Diego Padres. Last year, Jason Anderson averaged a 54.674 time en route to the win. At the first San Diego in 2016, Ryan Dungey averaged a 49.797 on his way to the victory. A tough track in Oakland made the short lap irrelevant; hopefully we’ll see the same this weekend. —Stallo

The last two weekends have seen a much-improved Cooper Webb. Sure, 8-7 finishes are not the ultimate goal, but he’s been riding much, much better. “I felt like I showed that I had confidence. I was riding like myself and was comfortable and had a great day,” he told Racer X after Oakland. “Like I said, it’s a process. I was pumped. I think going on to the next, however many we have, I think this is only the fifth one, so it’s good that I’m getting the momentum building now.” Will his move up the ladder continue this weekend? —Stallo

Last week Jason Anderson put a move on Marvin Musquin that left him on the ground, which you can see in the video below. You could make as many arguments as you like that Anderson’s move was or wasn’t dirty, and most of them probably wouldn’t be entirely right or wrong. But one thing’s certain—Musquin didn’t like it much and said so afterward, casually saying, “Next time it’ll be my turn.” It’s unlikely something that was said shortly after the race will continue an entire week later, but even so, it’s going to be interesting to see what happens in San Diego if Anderson and Musquin find each other on the track. —Aaron Hansel

Well, it ain’t over, but it ain’t looking good for Eli Tomac and his title hopes, either. At fifty-two points behind Anderson, who’s riding crazy good right now, things appear downright bleak. Even winning every single race from here on out wouldn’t guarantee a title for Tomac, and that’s saying something because there are twelve races left! But just because things are looking drearier than a rainy February doesn’t Tomac, or anyone at Monster Energy Kawasaki, is thinking of throwing in the championship towel. Look for Tomac to come out swinging in San Diego after his disastrous thirteenth in Oakland. —Hansel

Return of the Champ?

Defending 250SX West Champ Justin Hill hasn’t been the same so far this year, but he sure looked like he was back on point last week in Oakland. The Autotrader/Yoshimura Suzuki rider rode the best he’s ridden this season by far, coming from about eighth to nearly challenging for the lead late in the race. Afterward, Hill didn’t seem to be able to point to any bike changes or any gains made during the week to could explain his turnaround, simply saying finally getting a better start was what made all the difference. Can he get his first win of the season if he gets a good start in San Diego? —Hansel

Blake Baggett had a great night in Oakland, ending up on the podium and running extremely close to first place at times. That’s a pretty big step, considering he’d gone 12, 7, 7, and 9 at the first four rounds. The positive steps likely gave the always-determined Baggett an additional shot of confidence, something he’s pretty dangerous with when he’s got a full tank of it. Keep an eye on Baggett in San Diego—if he has another outstanding ride, this could mark the beginning of a string of excellent results. —Hansel

The racing was superb last week in Oakland, but the action in the 250SX Class could have been even better if Christian Craig hadn’t gone down all by himself while leading. Who wouldn’t have wanted to see a potential four-way battle for the win involving Craig, Aaron Plessinger, Hill, and Joey Savatgy?! And who knows, maybe Craig would have raced to an uncontested win, but there’s no arguing he had a potential win get taken away when he launched off the track in Oakland. We’ll see if he takes it back in San Diego. —Hansel