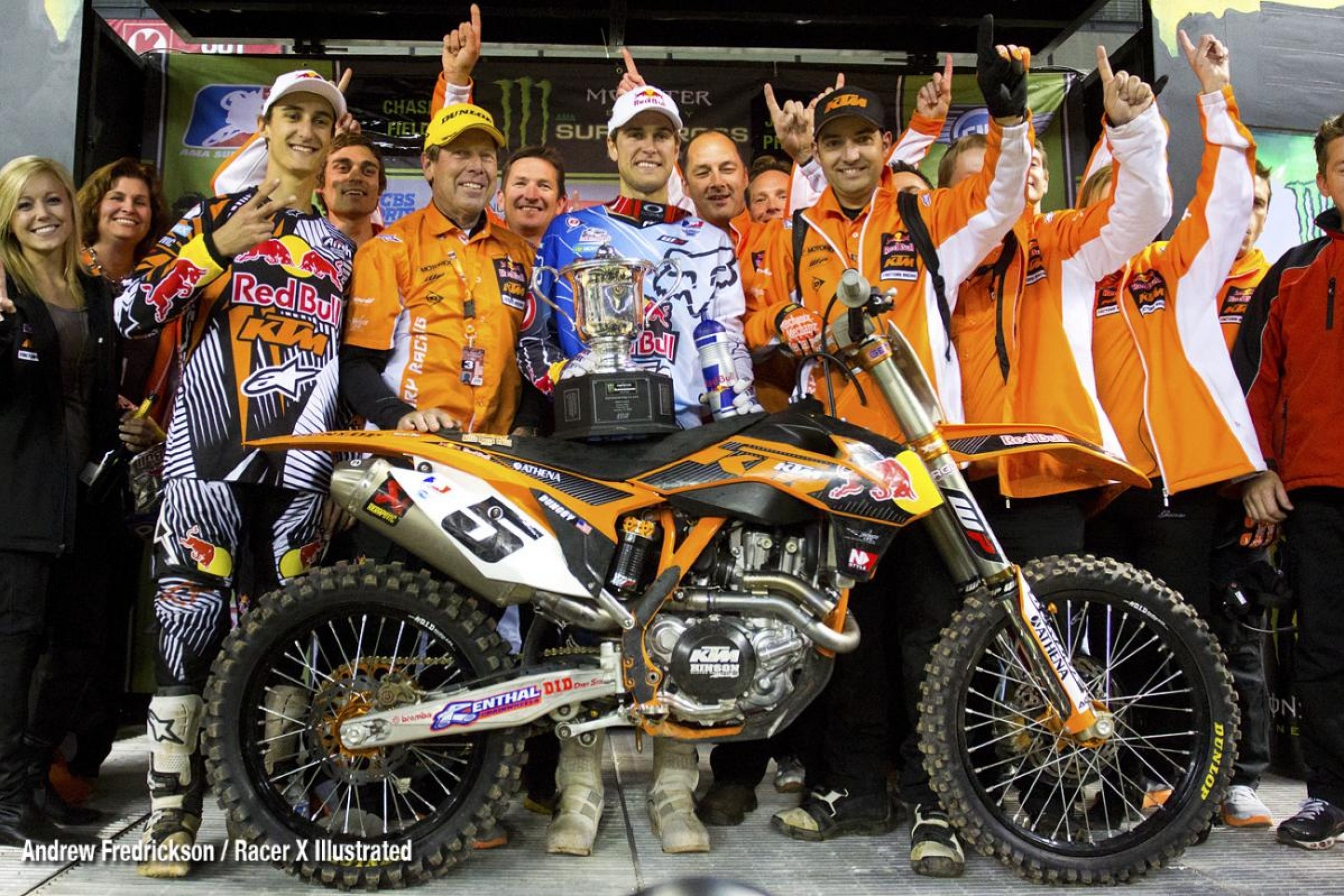 On This Day in Moto January 14

In the 125cc Class, Florida’s own, Tim Ferry, gets his first professional win in what happens to be his first race as a true factory rider, as Ferry was debuting for Team Suzuki. As a matter of fact, French import Mickael Pichon and rookie Kevin Windham, who finished second and third, were also debuting for new teams. Pichon had moved from Europe to the U.S. and signed with Splitfire/Pro Circuit Kawasaki while Windham had passed on a similar deal to sign with Team Yamaha.

And Oklahoma's own Guy Cooper was the big winner at the weekend's AMA Arenacross in Guthrie, Oklahoma. Cooper, a former 125cc National Motocross Champion, took three of the weekend's four wins in 125 and 250 Pro class racing. The other winner was Honda-mounted Chad Pederson, winning the last 250 Pro race.

Riding in a cameo appearance for Team Honda aboard a CR250, Jeremy McGrath stuns a packed stadium with a holeshot in the main event against a field made up almost entirely of 450s and then throws his signature nac-nac off the first triple jump. The seven-time champion and all-time King of Supercross will end up finishing fourth overall behind the three men who will battle all season long for the championship—Suzuki’s Ricky Carmichael, Yamaha’s Chad Reed, and Kawasaki’s James Stewart. McGrath’s holeshot also marks the last time a two-stroke has led an AMA Supercross or Pro Motocross race in either class.

In a watershed moment for the brand, Ryan Dungey wins the Phoenix Supercross aboard a KTM 450, giving the Austrians their first-ever win in the premier class of AMA Supercross. Dungey, who had switched over from Suzuki during the off-season, following longtime crew members Roger DeCoster and Ian Harrison. Over the course of the next half-dozen years they will work together to take KTM to the top of the sport.

Honda’s Ken Roczen and Troy Lee Designs/Red Bull KTM’s Shane McElrath win their respective classes at the San Diego Supercross at Petco Park, marking a second straight win to start the season for both. But one week later Roczen’s season will end with an arm injury at Anaheim 2, and McElrath will slip back third in the 250 class.