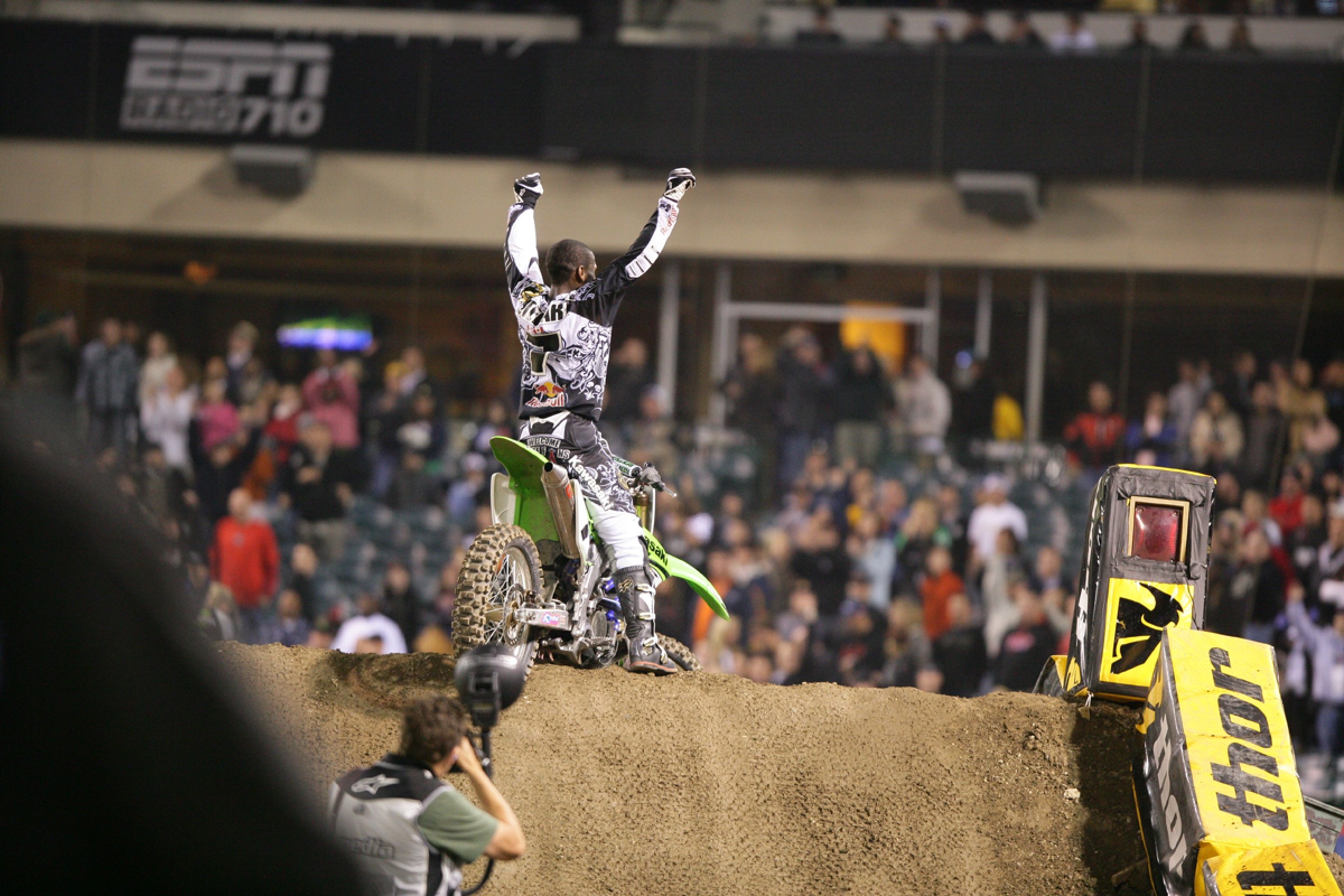 On This Day in Moto January 7

The thriving CMC Golden State Series—a seven-race, $24,000 series—opened at Saddleback Park with plenty of factory stars there to make it more of a National than just a SoCal gathering. All of the major factory teams were represented, but none better than Team Kawasaki. "Jammin'" Jimmy Weinert and newcomer Jeff Ward topped the 250 and 125 classes, respectively, while Yamaha's "Rocket" Rex Staten took the 500cc win over Kawasaki's newly-signed Tommy Croft. Among other well-known riders on hand were Yamaha’s Broc Glover, Honda's Gary Semics, Maico's Danny "Magoo" Chandler, Suzuki's Brian Myerscough, and my old friend and the ever-fast Steve Bauer, who finished seventh in the star-packed 250 class.

In a one-off preseason supercross event in Scottsdale, Arizona, newly arrived French visitor Jean-Michel Bayle topped future Honda teammate Jeff Stanton (in his first ride on red in the USA) and defending 125cc AMA National Champion George Holland, also on a Honda. At the time Bayle was the FIM 125cc Motocross World Champion but relatively unknown here in the States.

The 125cc class was also won by a Honda rider, Minnesota's Donny Schmit, who had recently parted ways with Suzuki. Schmit was trying to figure out what his plans for 1989 were, but when no factory support developed for which he had a comfort level, the 1986 125cc West Region SX Champion decided to sit out the '89 AMA Supercross Championship all together and just ride a privateer Honda CR 125 outdoors. Schmit, who would move to Europe the following year, never raced another AMA Supercross again, but he did win two FIM Motocross World Championships while abroad.

James Stewart-vs.-Ricky Carmichael-vs.-Chad Reed. In what may have been the single greatest season-long battle in series history, the 2006 Amp'd Mobile AMA Supercross Championship actually started in Canada back in December, though the first showdown on home soil came at Angel Stadium in Anaheim. For the first time all of the major players had switched up from two-stroke 250s to four-stroke 450s, including Stewart, who did not have Kawasaki's KX450F the previous summer and spent months eating the roost off RC's RM-Z450.

In one of those strange stats often overlooked by us bench racers, Carmichael never won the Anaheim Supercross opener. He did win many races at Angel Stadium, but he was a purposeful late-starter, as his trainer Aldon Baker was more about season-long motivation and endurance rather than any show of strength and first in the first race. And when Stewart started behind both Suzuki-mounted Carmichael and Yamaha-mounted Reed at the much-hyped Anaheim 1 race, it was James who actually looked like the fastest and strongest after Ricky threw it away in the whoops while leading.

Wrote Kit Palmer in Cycle News, “Stewart showed something that he really hasn’t shown much of throughout his young, though lengthy racing career—patience.”

And this from a previous bit here on Racer X Online: "The winner of the newly-rebranded 'Lites' class at Anaheim was Team Honda’s Andrew Short, who came from behind to pass the early leader, SX debutante Ryan Villopoto, who actually had to ride the LCQ to qualify for his first AMA Supercross. Shorty passed Villopoto on the tenth lap of the main event."

Makita Suzuki's Ryan Dungey, furious that One Industries had added his bitter rival Jason Lawrence to the gear brand's staple, let the company know it finally the opening round of the 250SX West Region in Anaheim. Days later, on January 7, the company announced that they were letting Dungey go.

Neil Calvesbert, CEO of One Industries, said in a release, "We signed a three-year contract with Ryan and we were looking beyond that with the brand, so nobody enjoyed making this decision. Everyone involved with One Industries gives 100 percent to the company, the teams and riders we work with and I would like to thank them for their devotion, professionalism and nobility throughout the events that took place at Anaheim."

Fox Racing quickly signed Dungey, and he would immediately start delivering, winning that weekend's Phoenix race and then going on to win both the 2009 250SX West Region and as well as the AMA 250 National Motocross Championship. He also anchored Team USA's win at the 2009 Motocross of Nations in Brescia, Italy. In all, Dungey would win nine major AMA Championships and dozens of races in his Hall of Fame career.

As for J-Law, he would never win again.