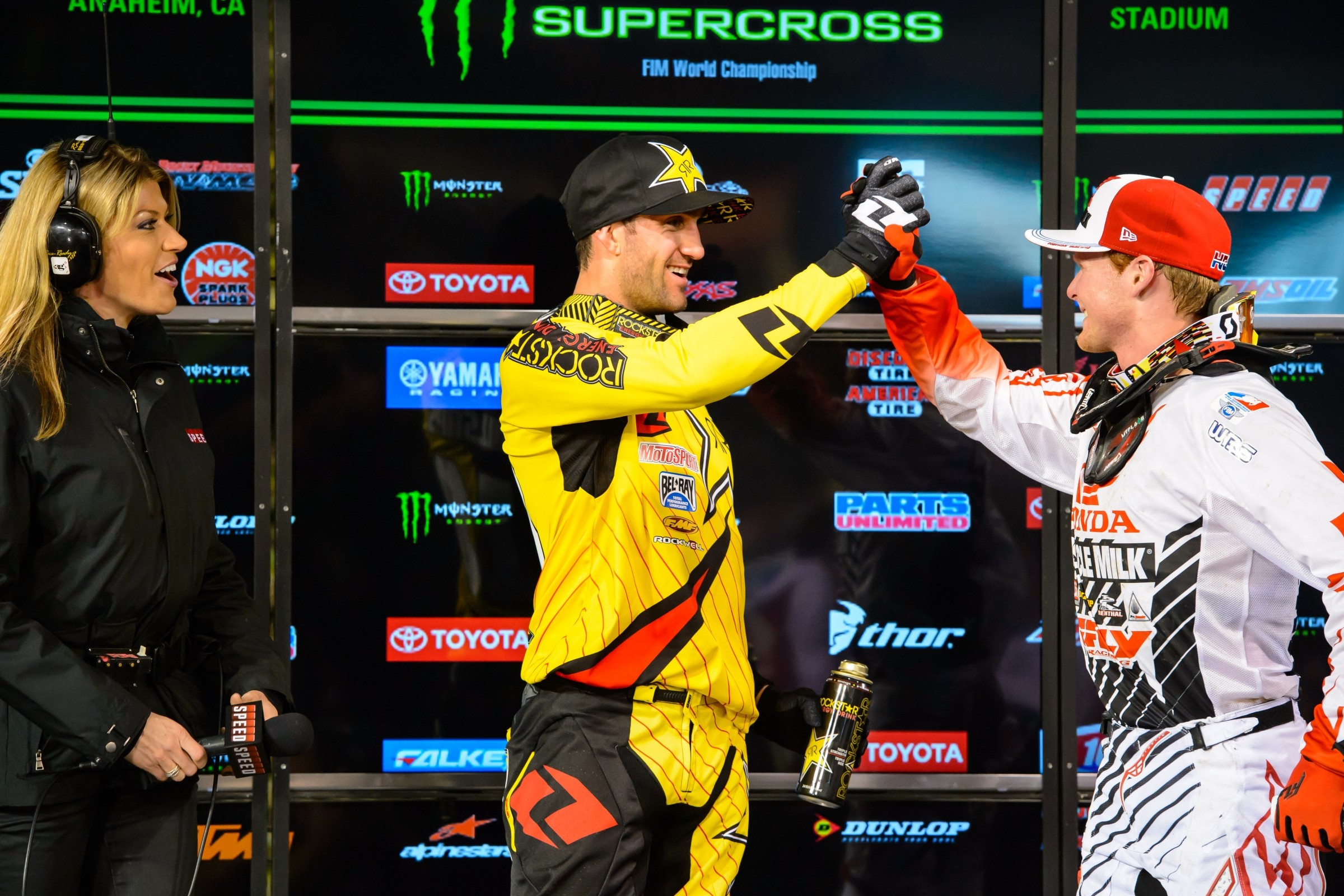 On This Day in Moto January 5

Can-Am, four years removed from winning the 1975 AMA Supercross Championship with Jimmy Ellis, announced that their 1979 line-up would be led by former factory Suzuki rider and three-time AMA 250cc National Champion, as well as the 1975 Inter-AMA Champion, Tony DiStefano. Joining Tony D. on Team Can-Am were Rich Eierstedt, Greg Robertson, Kippy Pierce, and an upcoming California rider named Donnie Hansen. The team would start out the season on the Florida Winter-Am tour before going all-in on the 1979 AMA/Toyota Supercross Championship.

At a press conference held at Anaheim Stadium prior to the opening round of the 1989 series, it was announced that Camel Cigarettes would post a $125,000 point fund. Then-AMA President Ed Youngblood and reigning series champion Rick Johnson were on hand, as well as executives of the R.J. Reynolds Tobacco USA, makers of Camel Cigarettes. All of them were wearing suits, Ken Roczen-style! It was also announced that the series would air on ESPN with Motoworld's Larry Maiers as host. The series also announced that it would be presented by Coors Extra Gold.

Suzuki rider Buddy Antunez swept both the 125cc and 250cc main events on the opening night of the Fort Worth Arenacross, a feat he would repeat the second night as well. Antunez, the all-time winner in AMA Arenacross races, would be followed throughout the weekend at various times by Jeff Willoh (Honda), Denny Stephenson (Kawasaki), Tommy Hofmaster (Yamaha), and Pedro Gonzalez (Kawasaki). 1990 125cc East Region Supercross Champion Stephenson's weekend, however, would be wrecked with a broken rib and a concussion.

The opening round in 2002 marked James Stewart's professional debut. He was only 14 days past his 16th birthday, but many were already pegging him the future. In the combined press day practice where factory riders from either class went out on the track together, the Kawasaki factory rider—he signed direct with OEM, not Pro Circuit Kawasaki like every other 125cc rider except Robbie Reynard since the company and the brand got together—ended up circulating with defending 250cc champion Ricky Carmichael. RC was out there on the #4 Honda, having left Kawi after winning both 250 SX and MX in 2001, and he had eschewed wearing #1, the first time that had ever happened in AMA Supercross. There was huge pressure on both RC and Stewart to win, but both instead went down in heaps. Stewart crashed several times but still managed to finish second; Carmichael crashed out completely while dueling with Amsoil/Chaparral Honda's Mike LaRocco.

The surprise winner in 125 Class was Travis Preston, who took advantage of Stewart's crash and a bizarre last lap in which he started third, but then passed Yamaha of Troy's Rodrig Thain and his Amsoil/Chaparral Honda teammate Christopher Gosselaar when Little Goose blitzed the whoops on an all-out attempt to pass the Frenchman for the lead, only to run right into the back of him. It took the rattled Carmichael, who left the Anaheim 1 infield on the Asterisk Mobile Medics mule, three more races to finally reach his first podium on a Honda with a win at Phoenix. But then he won 10 of the last 12 rounds to give Honda its first AMA Supercross title since Jeremy McGrath left in 1996. Stewart would win San Diego one weekend later and remains the youngest rider ever to win an AMA 125 Supercross at age 16 years, 21 days.

Also on this day, Chad Reed made his debut in AMA Supercross in the premier class, though back in 1999 he had finished a modest 17th in the San Diego 125SX West Region aboard a Suzuki RM125, then he went off to Europe. Reed finished sixth at the season opener in Anaheim. Entering 2018, Reed has 220 career starts in the class—99 more than the next closest rider, Justin Brayton.

In a field that included Ryan Villopoto, Ryan Dungey, Chad Reed, and James Stewart, an incredible battle for the lead broke out between Davi Millsaps and Trey Canard. Millsaps would win the race and hold the red plate and points lead until crashing at Daytona.