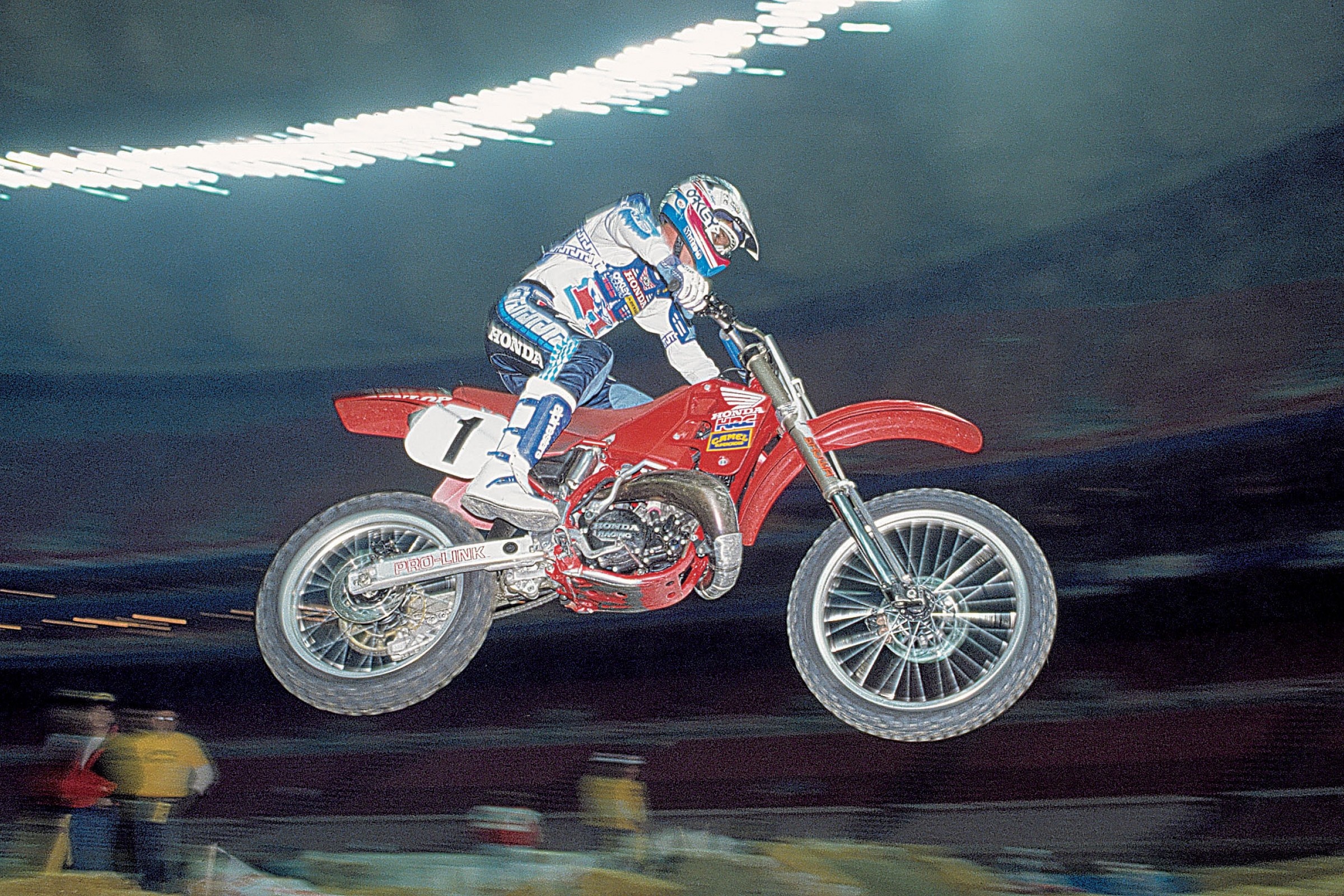 On This Day in Moto January 4

A memorial race is held in honor of late Maico factory rider Jim West, who was killed at the 1975 Saddleback Trans-AMA with a crash at the bottom of Banzai Hill. The race was held on January 4, 1976, at Moor Park’s Valley Cycle Park, and brought out many of the sport’s top stars.

Marty Smith, Danny LaPorte, and Warren Reid battled in the 125 Pro class. LaPorte topped Ossa’s Kenny Zahrt and Eddie Cole in the 250s, and Mosier did exactly what he said he would in the 500 Pro division. Pretty much everyone donated their prize money to West’s widow and family.

“And so the heated competition of motocross goes on,” wrote Weisel in summary of the event. “Yet it goes on with the memory of Jim West firmly entrenched in the hearts of racers everywhere. No one who knew him will ever forget his easy smile, friendly manner or fierce competitive nature. This one was for Jim.”

Future factory rider Kelly Smith is born. He will someday find himself in the record books on two different pages: in 2000, he will become the first KTM rider ever to win an AMA National at the High Point 125 National, and later the first to win an AMA Arenacross main event aboard a KTM. Incredibly, Smith was half a lap from becoming the first KTM rider to ever win an AMA Supercross main event when he was landed on by Ernesto Fonseca on the last lap of the 1999 St. Louis SX.

It was announced three weeks prior to the start of the 1989 AMA Supercross Championship that defending champion Rick Johnson would no longer be wearing Fox Racing gear, which he wore to win the title in both 1986 and '88. But RJ would not say which brand he would be wearing in place of his Fox Racing gear. "All I can say is that I will be riding a Honda," Johnson said.

The rub was that Honda was writing into all of its other riders' contracts—Jeff Stanton, George Holland, Mike Kiedrowski, Larry Ward—that they would have to wear official Hondaline apparel.

"Johnson can't sign with us because Honda won't let him," Greg Fox said to Cycle News. "We have sent him three offers but received no reply. I think he feels he's compelled to deal with Honda."

Greg's father Geoff Fox warned that Honda not allowing the riders to have their own clothing deals might harm the whole system. "If Johnson can't sign a contract with us, the industry won't be the same. Clothing contracts have always been separate from the manufacturers’ contracts. If, in the future, we can't have contracts with factory riders, then there's no need to support riders at any level."

Three weeks later, Johnson would show up and win the Anaheim Supercross in JT Racing gear. Somehow RJ and his attorney found a loophole that allowed him to sign a personal clothing deal, but it was too late to get back together with Fox. Fox would focus on Yamaha's Damon Bradshaw for the next few years as their main rider, and then in the fall of 1994 they stunned the industry when they snagged Jeremy McGrath from Sinisalo.

Chad Reed wins the AMA Supercross opener in Anaheim, the first of his career in the premier class. Entering the 2018 season, Reed is fourth all-time in career wins with 44, trailing only Jeremy McGrath, James Stewart, and Ricky Carmichael.

Reed passed early leader Mike Brown (a 125 SX East Region rider who was doing some moonlighting work on the West Coast aboard a 250) and pulled away while veteran Mike LaRocco held second over the bombastic Travis Pastrana, who had spent his heat race banging bars with defending champion Ricky Carmichael. When the Honda-mounted Carmichael retaliated with a textbook block pass, knocking Pastrana to the canvas, the crowd booed Carmichael heavily. Then they cheered loudly when Carmichael went down on the first lap of the main.

"Reed's a good rider," Carmichael said afterward. "He got a good start and stayed out of the chaos. I look forward to racing him. He's a great rider; I watched him last year (on a YZ250F). I watched him and Bubba (James Stewart) duke it out."

Speaking of Bubba, he was heavily favored to win the 125 West Region, but lost the opener to defending champion Travis Preston.

"For some reason, nobody even takes pictures of me or anything, which is fine," Preston said of all the attention Stewart was getting, even though he was wearing the #1 plate as defending series champion. "Everybody's focused on Bubba, and that's good, so I figured that's what they're cheering for."

After Stewart crashed early, Preston took the lead from Suzuki's David Pingree and motored away. But he could hear the roars every time the sensational Stewart passed someone on the #259 Kawasaki KX125.

"I still don't know if the crowd's behind me, because I know James is behind me (on the track), and they're probably cheering for him," the always-quotable Preston said on the podium. "And then I get scared, because what if I stuff somebody? Then everybody would start booing me, and then I'd get my feelings hurt."

Stewart would go on to win the championship by 59 points over Preston.