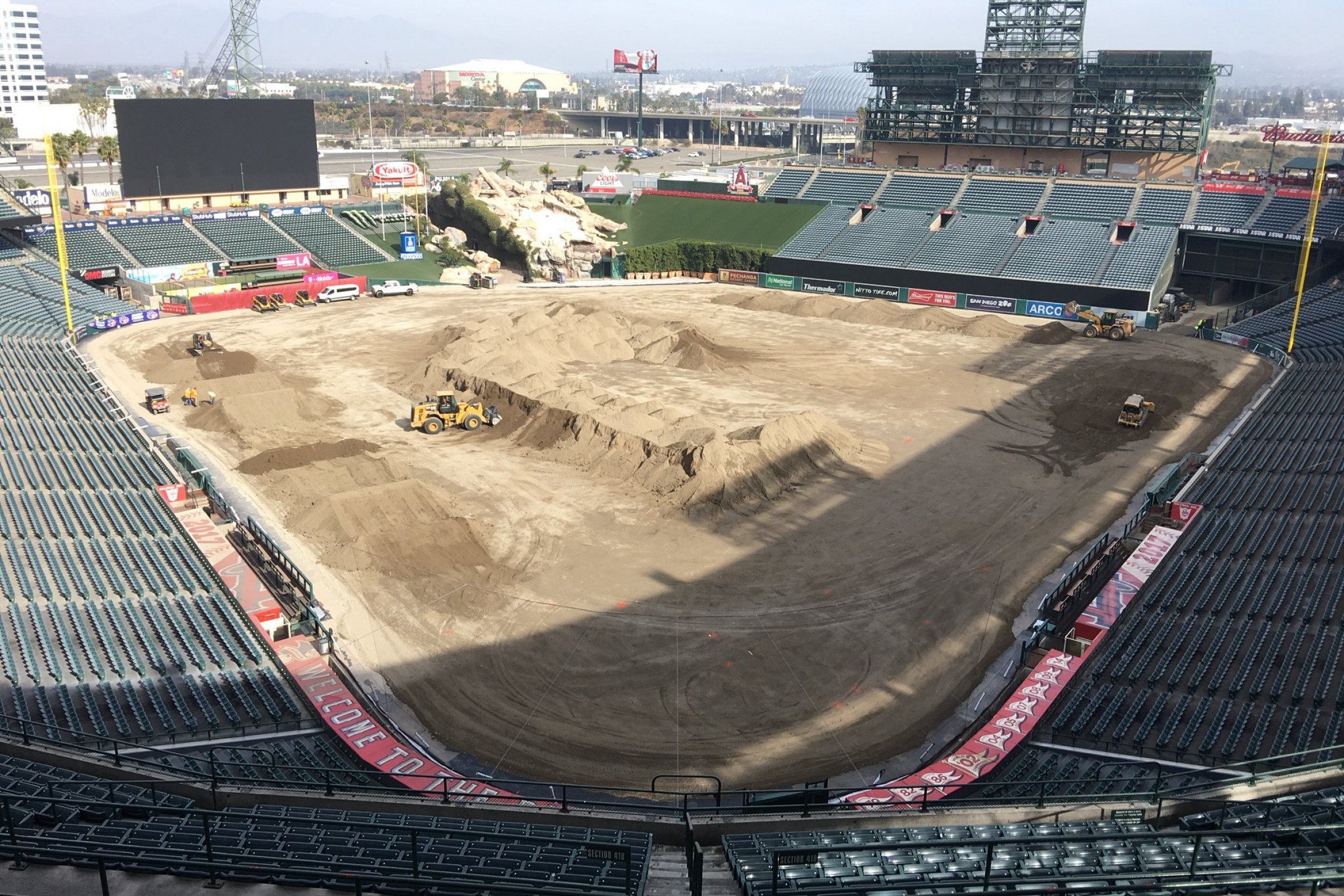 On This Day in Moto January 2

Work is well underway on Angel Stadium in Anaheim, California, the traditional opening venue for Monster Energy AMA Supercross. This Saturday’s race will mark the 71st time an AMA Supercross Championship race will be held in Anaheim; the first happened on December 4, 1976, and was won by Marty Smith on a Honda. Here is a photo of the construction, courtesy of Feld Motor Sports:

Seven-time AMA Supercross Champion Jeremy McGrath officially announces his retirement from professional racing at the Anaheim opener press conference in the Diamond Club of what was then called Edison International Field. McGrath switched to KTM and had ridden the new bike in the first two overseas AMA/FIM World Supercross rounds in Switzerland and the Netherlands in December ‘02. He  finished fifth and seventh, and decided upon returning to the States that he was no longer interested in being a full-time racer. When he retired, he had seven AMA Supercross titles and 72 main event wins, both still records.

“I always told myself that when I had other things on my mind besides giving 100 percent and winning, that I would retire,” said McGrath of his announcement. “Earlier this year I dislocated my hip, and then I had a concussion. Ever since then I’ve been tentative on the bike and not giving it 100 percent. I’m not going to go out and ride around mid-pack when all the people and companies that have hired me want me to be near the front of the pack and winning.”

But McGrath was not done completely. He would do a few more races in 2005 and 2006 while helping Team Honda revamp its program, famously leading the Phoenix SX in '06 on a Honda CR250, marking the last time a two-stroke ever led a supercross. Jeremy actually did his last SX—and his one and only on a four-stroke—on February 11, 2006 at San Diego. He finished a very impressive fourth in the main behind only James Stewart, Ricky Carmichael, and Chad Reed, the three men who would end up just two points apart at the end of the season.

Feld Motor Sports launches Nuclear Cowboyz in Pittsburgh’s Mellon Arena. Nuclear Cowboyz was a freestyle motocross tour where top FMX riders performed in a scripted storyline where two tribes battled for supremacy in a post-apocalyptic fantasy world. The Soldiers of Havoc were led by Nate Adams and the Metal Mulisha were led by Jeremy “Twitch” Stenberg.

Press day for the 2014 Monster Energy AMA Supercross Championship is held at Angel Stadium, with Kawasaki’s Ryan Villopoto front and center as the three-time defending champion. No one knew (or probably even guessed) that this will be Villopoto’s final season on the AMA circuit, which he would end with a fourth straight SX title, despite adding competition from class newcomers Ken Roczen and Eli Tomac. Here’s what the press conference looked like on the eve of that last title run for RV.