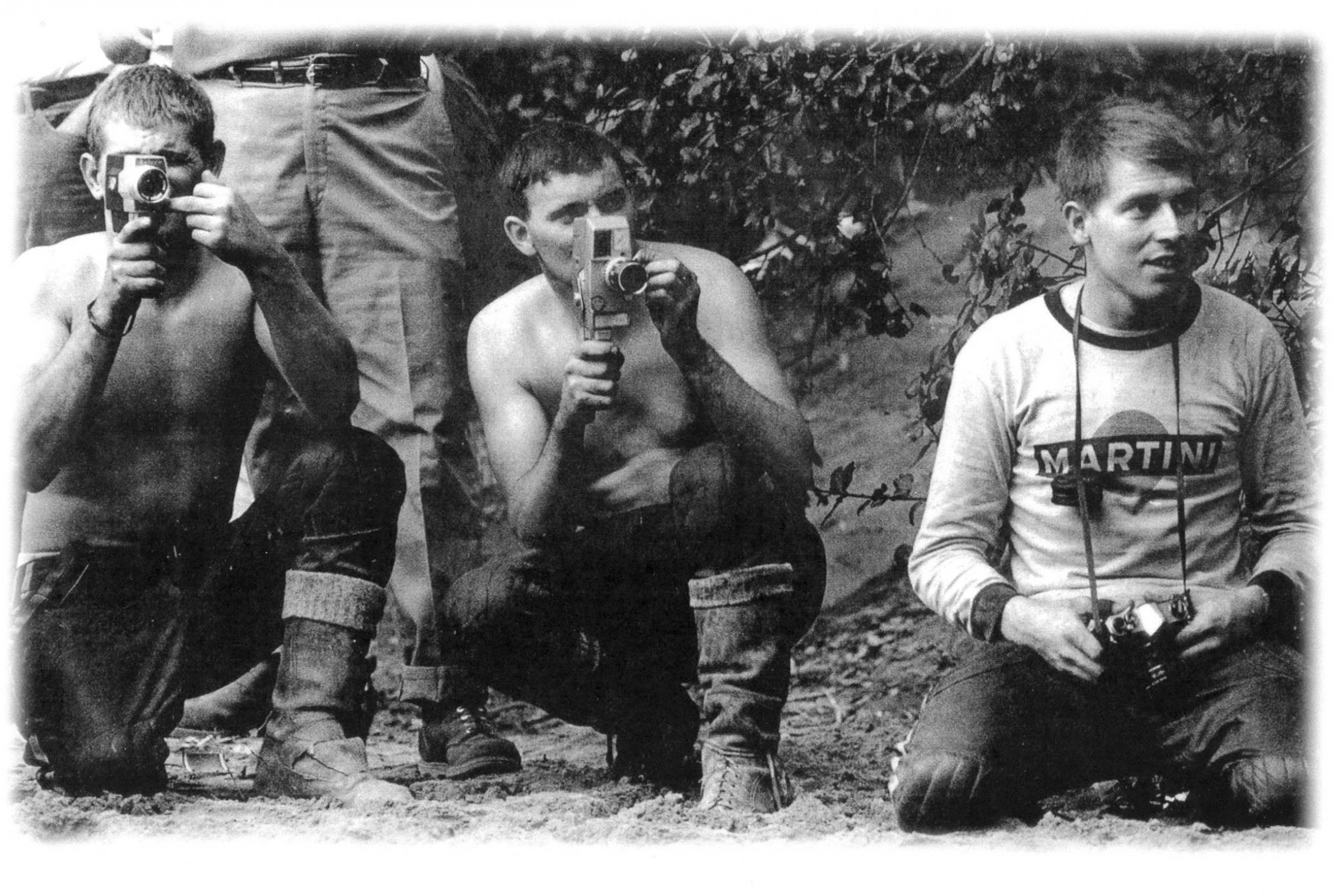 Welcome to Racerhead, and Merry Christmas everyone! We are coming to you from an almost empty Racer X headquarters in Morgantown, West Virginia. It’s not exactly the North Pole, but we are hoping for a white Christmas on Monday. We just put the next issue of Racer X Illustrated magazine to bed and everyone got to head home for the holidays.

As you can imagine, it’s been a quiet week as everyone in supercross is in the two-week countdown/sprint to Anaheim 1. And so is everyone else involved in the series, from the folks at Feld Entertainment, who are probably busiest of all, to every race shop, gear company, series sponsor, and more. Their Christmas and New Year’s are no doubt less festive and relaxing than the rest of us. And you know who is probably having the most relaxing Christmas of his entire life? Ryan Dungey. Think about how busy it must have been at this time last year compared to now for the happily retired Red Bull KTM rider!

This is also the time where we hold our collective breath and hope that we don’t get a December surprise in the form of news popping up on our phones or social media about one of the riders getting banged up in a practice crash. Right now everyone is tied for the lead in points, so it always deflates things when you hear that someone has gone down while just getting ready to race.

I am trying to get my own holiday shopping finished, and that means rolling up my sleeves, sharpening my elbows, and wading into the scrum across the Interstate at Wal-Mart, then making sure the chimney at home is clean so Vance and Sloane will get a visit from Santa. (Hint, Mr. Claus: They want electronics, headphones, a basketball hoop for the new driveway, and peace on earth. Well, Sloane does, anyway. And of course new mini-bikes.)

Looking for last-minute gifts? How about getting your loved ones, friends, or even just yourself tickets to the 2018 Monster Energy Motocross of Nations at RedBud?

You can also score some great deals on the 2018 Lucas Oil Pro Motocross Championships right here.

And if those seem too far off, Monster Energy AMA Supercross is right around the corner! Tickets for Anaheim 1, followed by the other 16 rounds that make up the series, are all on sale right here.

Merry Christmas and Happy Holidays, everyone!

Last year, my son was revealing his new obsession with dirt bikes, so for Christmas, of course, he asked only for dirt bike toys. I knew where this was headed—he was going to be asking for a real dirt bike one of these years, and indeed, when he sat on Santa's lap a few weeks ago, he asked for "a little tiny dirt bike." Santa mentioned the word toy, and my son quickly explained "No, to ride."

My son is three. Last year in Racerhead I explained that I would probably be getting a PW50 for Christmas 2017. Well, the time has come and times have changed. Instead, I've taken delivery of a STACYC E12, which is basically an electric-powered balance bike, designed by a former engineer at KTM. My little guy, like many kids these days, was ripping around on a Stryder balance bike before he even turned two. Two years later, he's ready to take another step. I've got him on a small pedal bike, but it's still not a dirt bike to him. Yes, three-year-olds have ridden PWs before, but that's a massive step. The STACYC is in-between. There's a motor, a throttle, and brakes. It only weighs 17 pounds, though. The real dirt bikes and PWs will come later.

Or will it? The electric future is coming, like it or not, and no one really knows what a full-sized dirt bike will be like 12 years from now, when I'll have a 15-year-old ready to get on big bikes. Electric vehicles still have many hurdles to overcome, they're still heavy and still expensive, but the numbers are going to change dramatically as technology improves. At some point, we're going to reach the personal preference decision—the bikes will all be similar in terms of cost and performance. At that point, riders will have to decide. Electric bikes will be quiet and relatively maintenance-free. They'll be easier to ride because they won't have clutches and gears, and with a simple map switch on the bars, you can make the bike docile enough for your girlfriend to take her first ride, but fast enough for you to race.

Is that what everyone wants? The sound of a dirt bike, the challenge of a dirt bike, and yes, the zen and the art of motorcycle maintenance has always been part of the appeal. Electricity can strip many of those things away. The market, though, is telling us people aren't buying motorcycles like they used to. Perhaps an easier, more accessible route will bring in new riders. I know from my standpoint, a small battery/motor on a tiny balance bike makes more sense than a full-on dirt bike. That's saying something right there. Will anything ever be as fun as a gas-powered bike? Not sure. Can electric bikes help create more new young riders, the type this industry desperately needs? I definitely think so.

Here at Racer X (and next door at MX Sports and Racer Production) we're lucky to get to go to work every day in what is basically a motocross museum. No, it's not of the Tom White variety—we don't have priceless vintage motorcycles and equipment like Tom had in his amazing Early Year of Motocross collection—but we have a lifetime of accumulated bits and pieces. It ranges from Even Knievel toys to Loretta Lynn's bibs to uncut sheets of the Hi-Flyer Trading Cards to a 1973 Honda QA. So I thought it would be a cool addition to Racerhead each week to start sharing a few things here that we (literally) have laying around the office. I will start with some old motocross event posters that my mom Rita designed herself.

The poster for the last ever Inter-Am, which also included a 125 National held at Appalachia Lake MX Park in Bruceton Mills, WV.

The 125 National poster from the July 4, 1976 (Bicentennial Day) AMA 125 National at Keyser's Ridge, Maryland's Appalachia Highlands, which would be won by privateer Steve Wise.

The 1980 High Point National t-shirt, which I believe was designed by the old Dirt Shirts company from Cocoa Beach, Florida.

The off-season is just about done, but until then, we're trying to fill some virtual pages, bro. With that in mind, Tony Blazier and I produced on PulpmMX.com (because no respectable moto site would run it) the best mullets in the history of motocross. We rated them on a scale of one to five "Agassi's" in honor of the best one ever produced. You can read it here if you so dare.

I bring this up because at some point we admired this guy in an Answer ad for his ’stache and mullet combo. It was glorious. I texted with the owner of Answer back then, Eddie Cole, asking him who this model was in these ads with Micky Dymond and Johnny O'Mara. Cole said his name was Gary, and he worked at Answer back then in the design department. The fact his name was Gary made this even better.

Anyways, smash-cut a few days later and Gary emails Blazier! The power of mullets had returned! Below is his email:

"Ha Ha. Funny how this image keeps re-surfacing. Eddie Cole probably didn’t want to give up my identity, but Mystery Mullet #9 is me, Gary McClelland. I was art director for Answer Products at the time and sometimes fill in photo shoot guy. Of course the photo you have is of me solo, and not the slightly cooler version with Micky Dymond and Johnny O’Mara standing next to me! The locks flying out the back of the helmet was pretty awesome back then. -Gary"

Earlier this week, we reported on the suspension handed down to Matt Moss, a multi-time champion in Australia and a rider who spent time here in the U.S. Here is the full release of that announcement.

The Australian Sports Anti-Doping Authority (ASADA) today acknowledged the decision of the Court of Arbitration for Sport (CAS) to sanction former Australian Motocross Champion Matt Moss for the presence and use of a prohibited substance.

Mr. Moss was subject to an intelligence-led test at the Murray Bridge round of the MX Nationals in 2016. His sample was analysed at the Australian Sports Drug Testing Laboratory, part of the National Measurement Institute, which detected the presence of Ostarine and its metabolites.

Ostarine is a Selective Androgen Receptor Modulator (SARM) which is banned at all times in sport and is not approved for human use in Australia, except for experimental research purposes. The US Food and Drug Administration recently warned that SARMs pose serious health concerns, including increased risk of heart attack, stroke and life-threatening liver toxicity.

As a result of the CAS decision, Mr. Moss was given a four-year ban, backdated to 15 July 2016 to account for time served under a provisional suspension. The ban also includes the disqualification of any results from the date the sample was taken, as well as the forfeiture of any medals, points or prize.

Mr. Moss will be ineligible to participate, as an athlete or support person, in any sports that have adopted a World Anti-Doping Agency compliant anti-doping policy until 15 July 2020.

Here’s a reminder to set your DVRs (or sneak away from your holiday party) tomorrow to catch the second episode of NBCSN’s coverage of the Rocky Mountain ATV/MC AMA Amateur National from Loretta Lynn’s. You'll be treated to highlights from both the 250 A and 250 B classes, featuring up-and-coming talent such as Garrett Marchbanks, Joey Crown, Seth Hammaker, Joe Shimoda, and Derek Drake. The show will also include a story on the ultimate motocross fan, Brian Spencer, in addition to a salute to the 2017 class champions. The show airs at 5 p.m. EST tomorrow on NBCSN.

Head-scratching Headline of the Week

And, a congratulations to American Flat Track racer Jared Mees on being named 2017 Cycle News Rider Of the Year.

Are you searching for that last-minute Christmas gift for the ultimate racer in your family… or maybe even yourself?! A ticket to the Ricky Carmichael Daytona Amateur Supercross (RCSX) is exactly what you are looking for! This is your opportunity to race in the infield of the World Center of Racing, Daytona International Speedway, the day after the pros take to the track for the Daytona SX. The class structure includes 33 classes from youth riders on 50cc bikes all the way up to vet and senior classes. The race follows a supercross format, using heat races and last chance qualifiers to seed the field of riders into the main event in each class. The event offers limited spots in each class, and gate positions are going quick. To get more or to reserve your gate, click here.

For the latest from Canada, check out DMX Frid'Eh Update #52.

Subscribe now for as low as $9.98 and receive a FREE 2018 "Through the Decades" Calendar plus access to our digital edition.

Merry Christmas and Happy Holidays again, see you at the races!