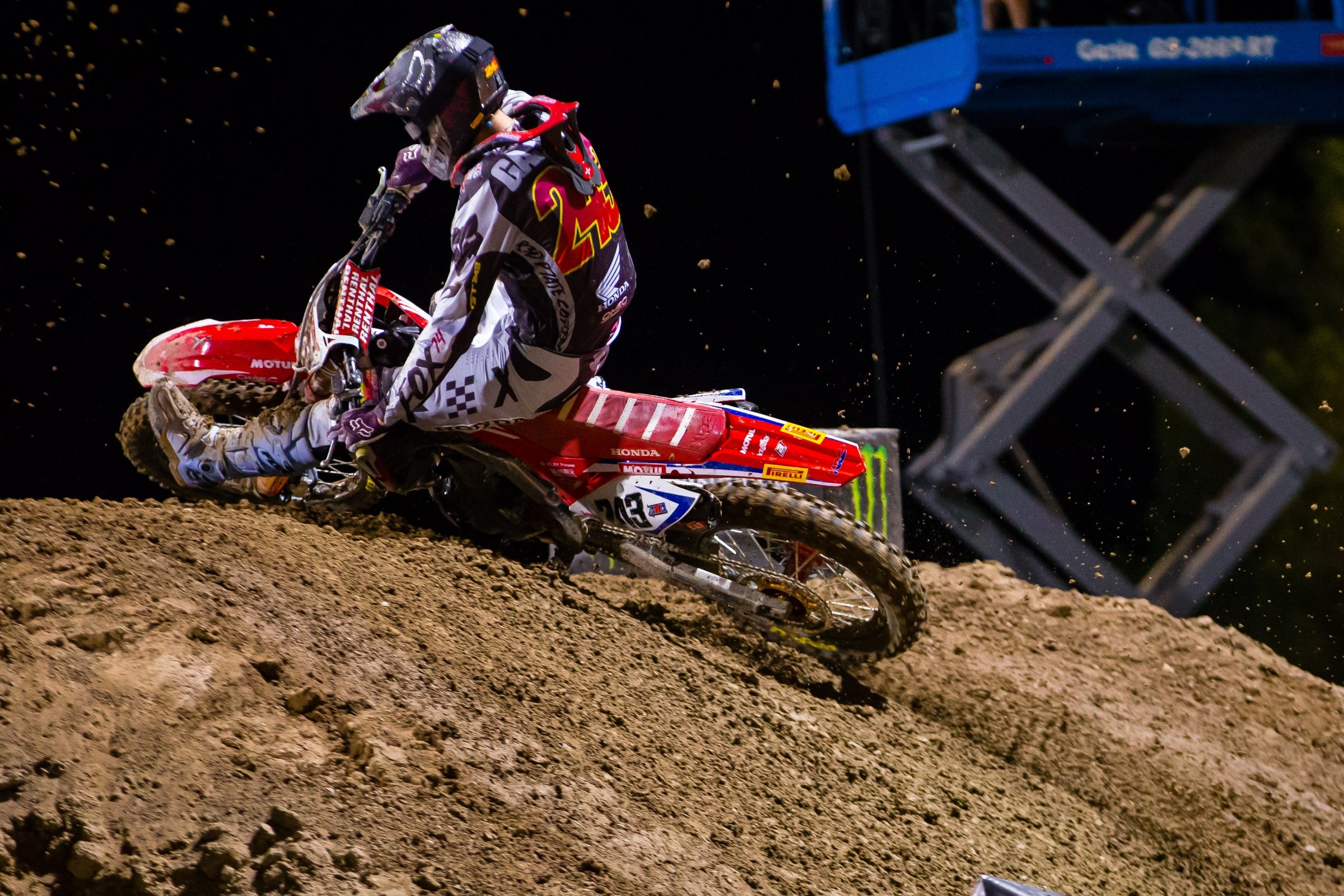 The annual Monster Energy Cup promises a combination of both motocross and supercross technique, as the track is generally bigger and faster than a regular supercross track. It also doesn't feature any whoops. That doesn't mean the track is devoid of challenges, however. Many of the jump sections required scrubbing and turning to stay on course or in-rhythm, and the Vegas soil is always tricky—it starts out muddy but dries out, inevitably, by the end of the night (please excuse the actually muddy 2016 Monster Energy Supercross finale from the record, though).

So how did the riders deal with the Monster Energy Cup this year? Our man Jason Thomas, a veteran of 15-plus years of pro supercross racing, grabbed some photos to explain how things went.

Tim Gajser made the trip over from Europe for the Monster Energy Cup and while things didn’t go well, he still showed he has skills. He is incredibly skilled when it comes to scrubbing speed off of jumps as he demonstrates here. This is a bit of a “hip jump” in the back section. The takeoff and landing are going in different directions so the idea is to turn in the air and accelerate hard on landing. If you jumped straight, you would be facing the Tuff Blocks and headed off the course.

Not only do you want to turn in the air, it’s also ideal to not jump high so that the tire can drive forward quicker than hang time would allow. To accomplish this, Gajser is going to scrub and also lean hard to the inside on takeoff to leverage his weight and the bike toward the left direction of the next section. Notice his rear tire is breaking loose as it slides outwardly. That’s going to push his rear end wide when it leaves the ground and further his turn to the left. He is careful to stay forward here so that he maintains full control of that front tire. With so much lean angle on the face of the jump, he has to be sure the front tire is exactly where he wants it. It’s okay if the rear tire slides toward the outside but if the front slides too much, he will land on the side of the tire and crash. He also wants to turn sharply on the landing, and doing so requires weighting the front end and gaining control over the bike’s direction. That control is being dictated not only by sliding forward on the seat but also his front leg being way out in front of him. His leg is giving him leverage over the balance point of the bike and also acts as a crutch if his front end slides too much.

An important point here for those trying to master this move at home: scrubbing can go violently wrong if you allow the footpeg to dig into the dirt. Big crashes ensue when that happens. He is counter balancing that risk by putting his weight just to the outside of the seat which pulls the bike into a slightly higher lean angle. The reason for this is that inside lip of the jump is higher than the outside. If he leaned into that with reckless abandon, he could catch his foot or footpeg on the takeoff and high side.

Tim is one of the best in the game at scrubbing. This is a slow, easy one for him but the technique is all the same. Staying low, maintaining momentum, and getting your rear tire back on the ground to drive forward is what it’s all about.

Marvin Musquin and Jason Anderson are about to storm back into the stadium. I believe this is is the first lap of the first main event. The track builders added a couple of roller jumps to slow the track down but they also added a level of difficulty. As riders accelerated, they were trying to scrub these small jumps to keep their wheels on the ground. Notice their rear wheels floating to the outside as they drift over the jump and turn mid-air. For Marv, he is extremely far forward and has his KTM 450 SX-F wound up to 14,000 RPM or so. His body English is full attack mode with his finger at the ready to deliver power to the ground. Jason is in the earlier stages of Marvin’s motion with his leg to the inside to control any slide. With this section being a bit muddy, both riders are conscious to control that front tire slide with their body weight (and foot for Anderson). This picture screams first lap intensity.

This is also the section where Tomac crashed. Eli hit a slick spot on the outside and his rear tire spun up unexpectedly, forced him sideways and on landing, high sided back the other way. After that, it’s off we go. This is typical for sections that have both mud and hard-pack as this straightaway did. The tire will spin and catch several times as it crosses the wet and dry, making it very tough to predict. He was driving hard out of the corner and had traction then hit a slick area. Unfortunately, that spot was right on the takeoff of the jump and left him no time to react.

If you want to win a million dollars, this is a good way to go about it. Marvin is pictured here grabbing the holeshot in the final main event Saturday night. He’s already cleared the nasty transition from the decline, is forward on the bike to control a wheelie, and is able to accelerate fully. In comparison, Deano to his right is fighting a wheelie and will have to either engage the clutch or let off the throttle slightly.